“Some recipes are poems. A few scene stealers are novellas. But stuffed grape leaves are short stories; tiny fables of transformation, not of people… but of food.” – Anna Ciezadlo, Day of Honey

You could watch the entire length of The Titanic – and then watch half of it again – in the time it takes to make Amani’s warak dawali. These tiny vine/grape leaf parcels, stuffed with spiced rice and cooked in chicken broth are worth it, I think. Even if it takes an entire morning to make, and just five minutes to devour.

Warak dawali is the Palestinian and Jordanian word for stuffed vine leaves, but you can find variations on this all over Turkey, the Middle East, Caucasus and the Balkans. Spread by way of the Ottomans no doubt. In Bosnia, sour cabbage leaves – purchased in big vats of brine – encase minced lamb or beef (sarma). In Armenia, I cooked with a lady who could roll blanched, boiling hot, cabbage leaves with total ease (tolma). She layered them in a pot, hiding chunks of dried apple here and there, into what later became surprise hits of sweet pulp.

As with all recipes, the ingredients are swapped out depending on what’s available. The choice of leaf changes. Sometimes quince or cherry, cabbage or chard leaves, sometimes vine leaves. It’s quite something to travel from one culture to the next – Bosnia to Palestine, for example – so far apart and so different at first glance, but with habits that have seeped through borders and across lands to influence the most basic of everyday acts: what we eat. This dish is one of them; an ever-evolving dish that tells a multitude of stories. 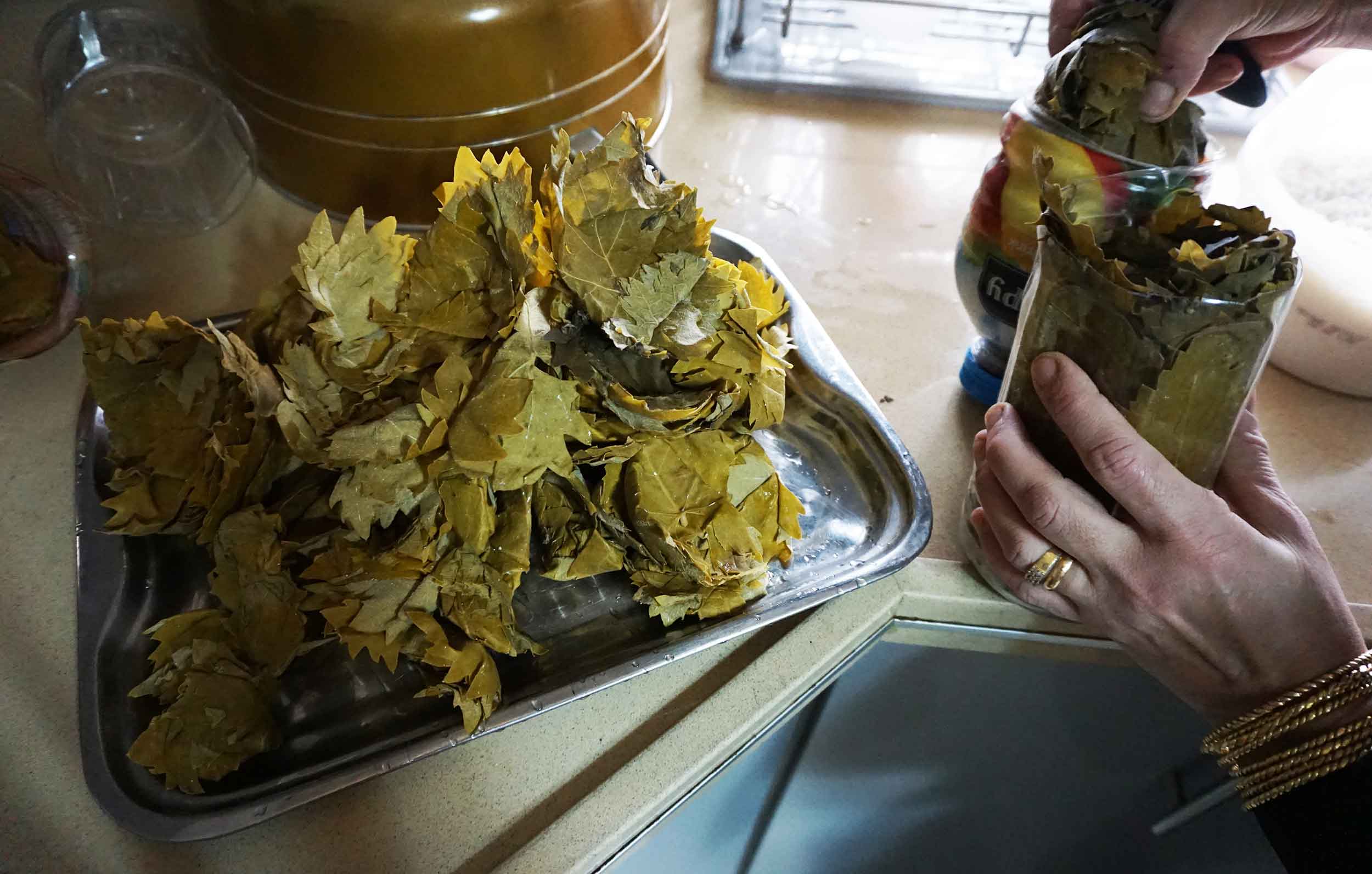 Back in Palestine, Amani and I are still rolling delicate vine leaves, spending the hours swapping stories, discussing family and religion, politics and history. She’s Jordanian, married her Palestinian husband and came to live in this dusty village close to Israel. She teaches yoga and aerobics to neighbouring women, and spends hours everyday putting lunch on the table (three hour prep is no big deal, she says). Their apartment is spotless. Stiflingly so. In contrast, Amani is warm and motherly, patiently helping me correct my errors.

Her vine leaves come from their own vines across the way.  It’s December when I’m with her and grape harvest is a month or two into its conclusion. The vine leaves having been carefully layered and stacked into old juice bottles for the winter ahead, are removed and carefully blanched. Preparation of both the filling and the accompanying chicken follows…

To do this, Amani begins by jointing a whole chicken, washing it and rubbing in a splash of vinegar, lemon juice and a good pinch of salt. She adds the chicken to a pan of already simmering onions and garlic, with turmeric and baharat – an Arabic spice mix commonly used across the Middle East, with a base of black peppercorns (bahar means pepper in Arabic), cumin, cloves, cardamom and cinnamon. There are plenty of recipes online that show you how to make it from scratch but it’s not impossible to find ready-made. The chicken is then browned, before water is added and it’s left to simmer for tender flesh and a delicious broth. More on that later. 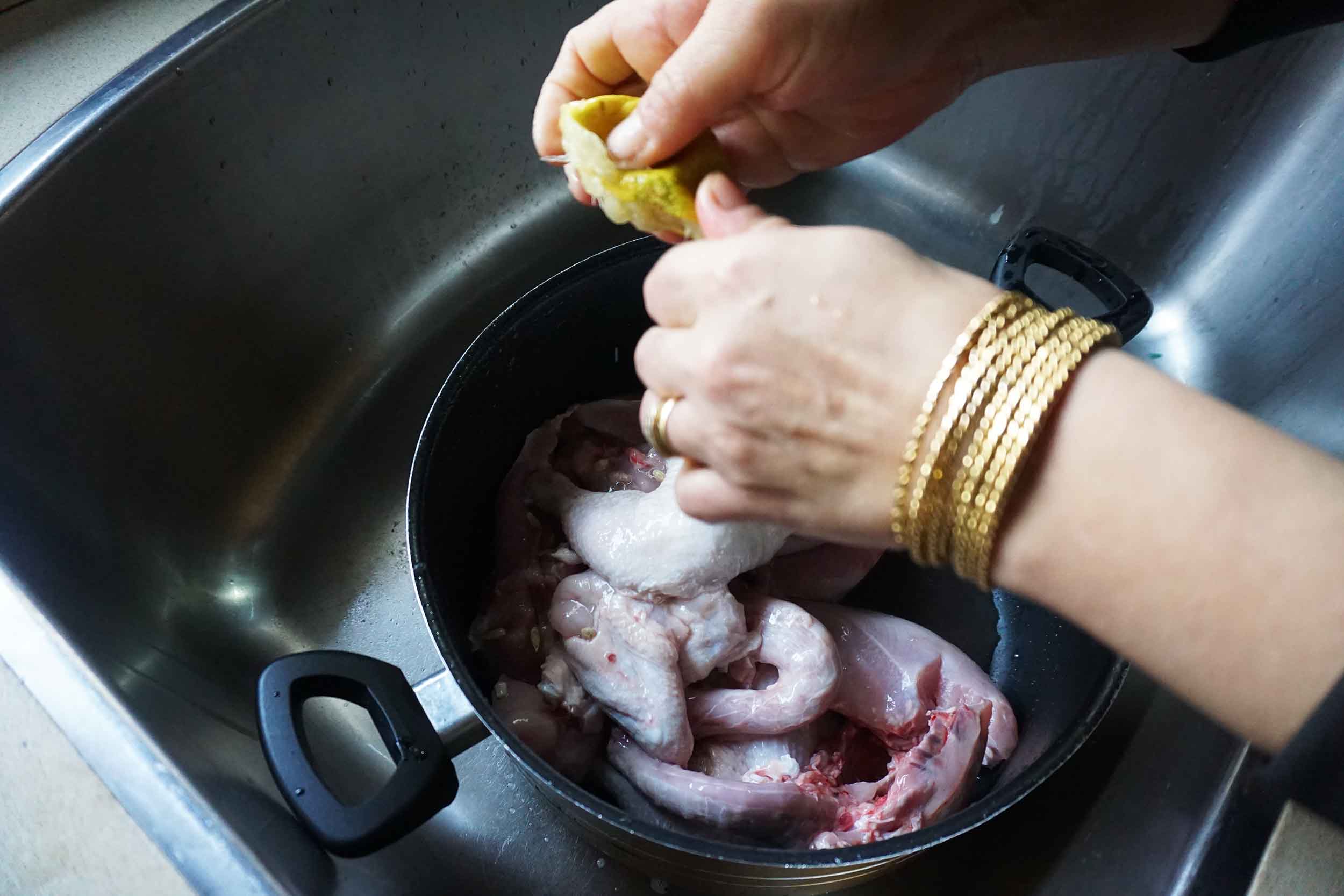 Next the filling. Traffic-light colours of red tomatoes, yellow peppers and fresh parsley are chopped finely and mixed with rice, spices, dried mint and olive oil. There are as many variations on this as there are people who make it – fresh mint or spring onions, chickpeas and, of course, minced meat are equally common additions.

And back here we are. Stuffing, folding and rolling. It’s important to put just a small pinch of filling onto each leaf – too much and it’ll split. Amani’s daughters come home from school, swiftly changing from their burqas and helping chop and assemble the salad. It’s mid-afternoon by now – a good 4 hours since I first arrived – and the vine leaves are finally complete. My fingertips are tender and wrinkly. Yet there are still the leaves to cook and the chicken to roast.

Amani removes the tender meat from the pan and sets the pieces into a round roasting tin. A marinade is quickly pounded out with garlic, paprika, olive oil and tomato paste, before yoghurt is muddled in. She tosses it through the chicken and puts it straight into their oven – a round hot plate with a heavy lid. Into a pan, she slices onions and garlic, she layers up the stuffed vine leaves and pours over the reserved chicken broth. On they go to cook and suck up all that juicy flavour – what a wonderful way to make double use of one bird. 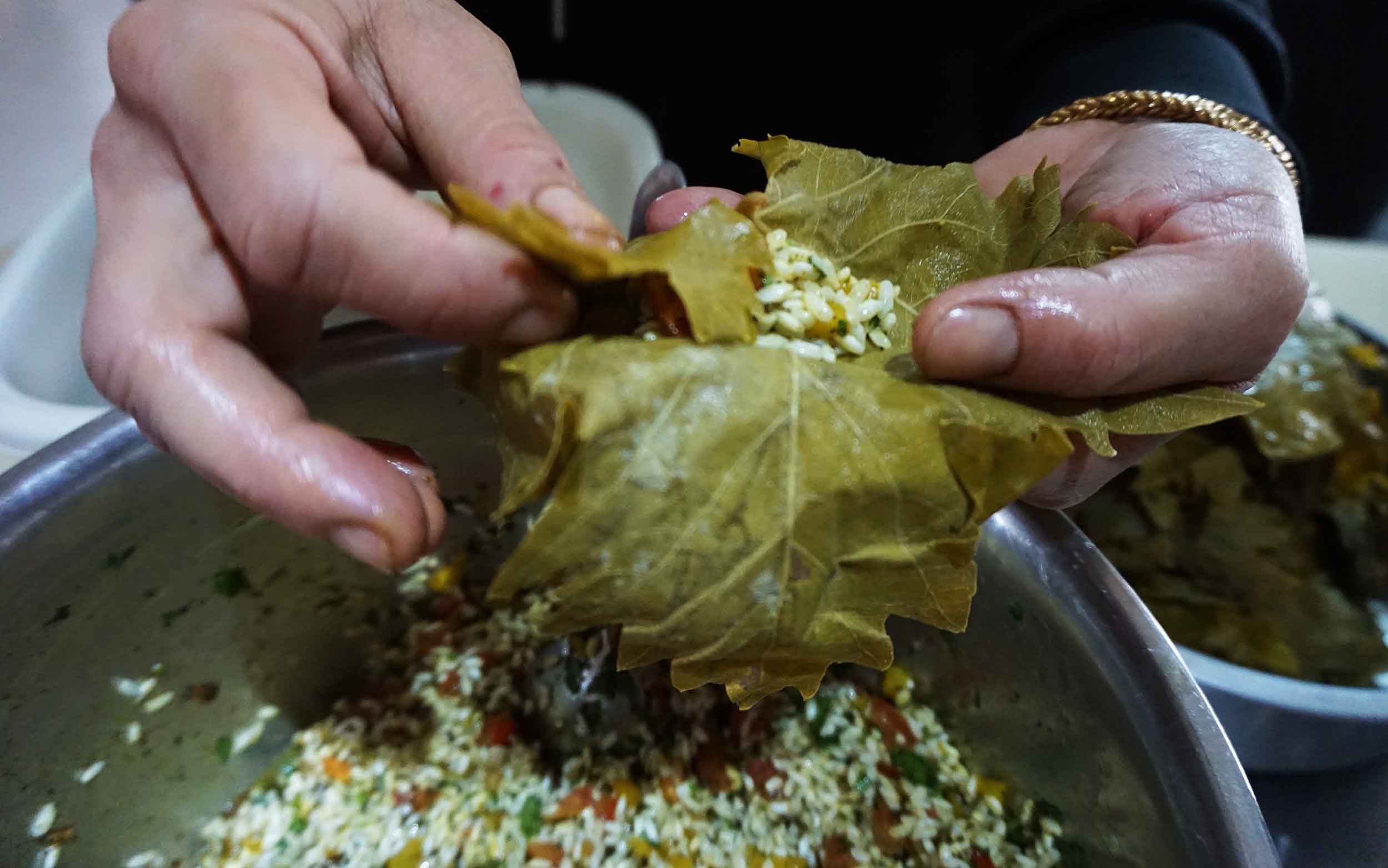 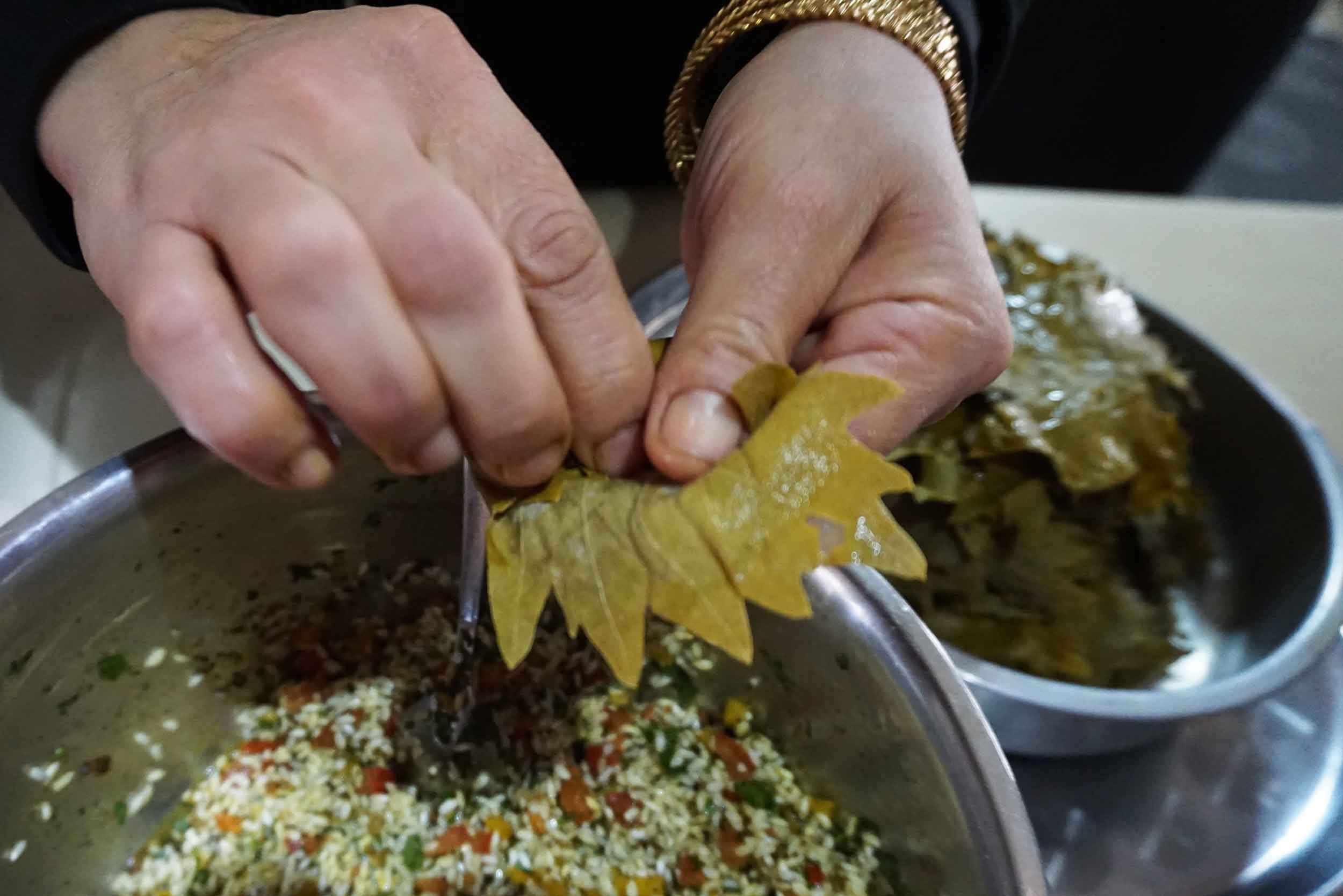 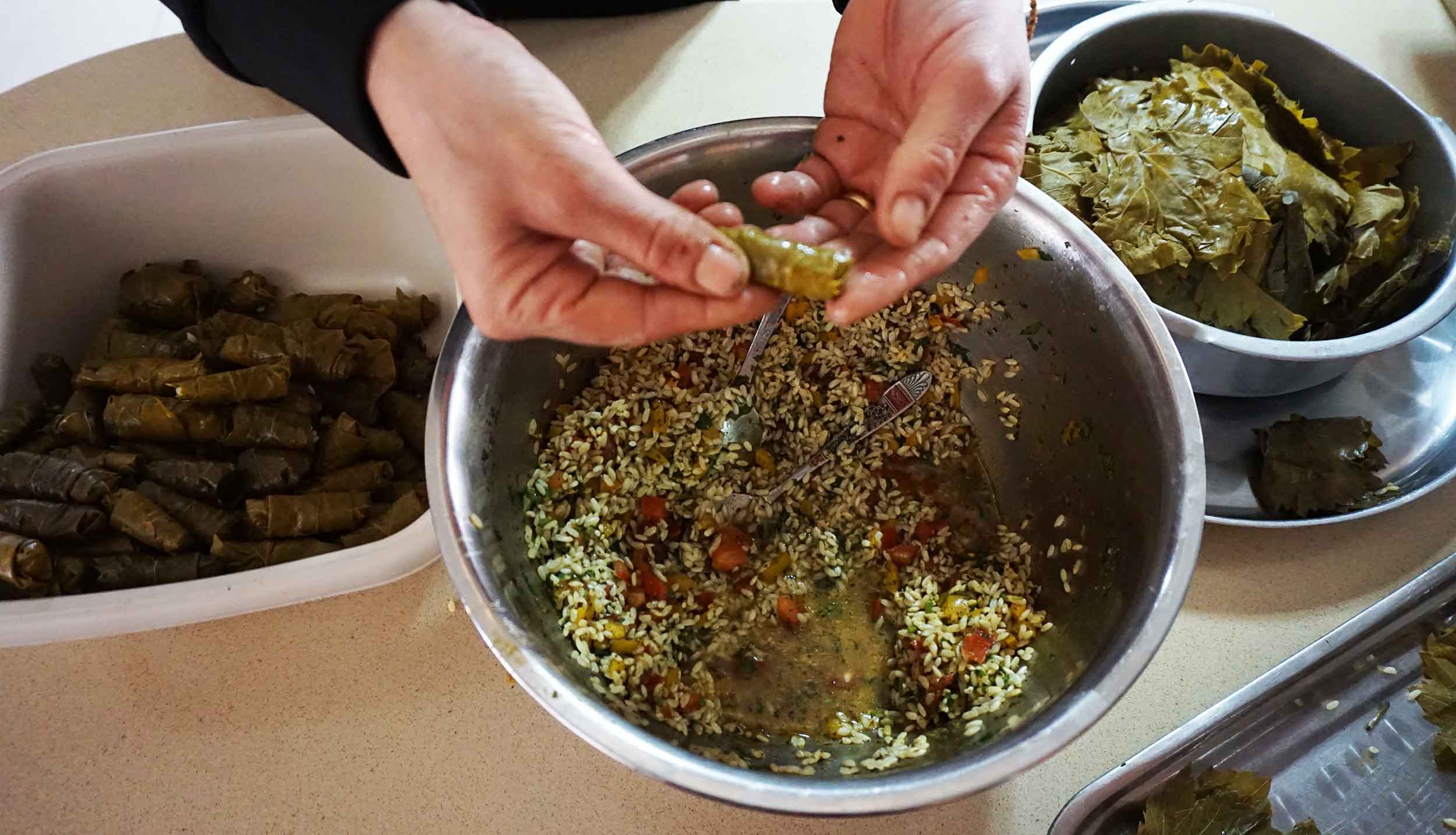 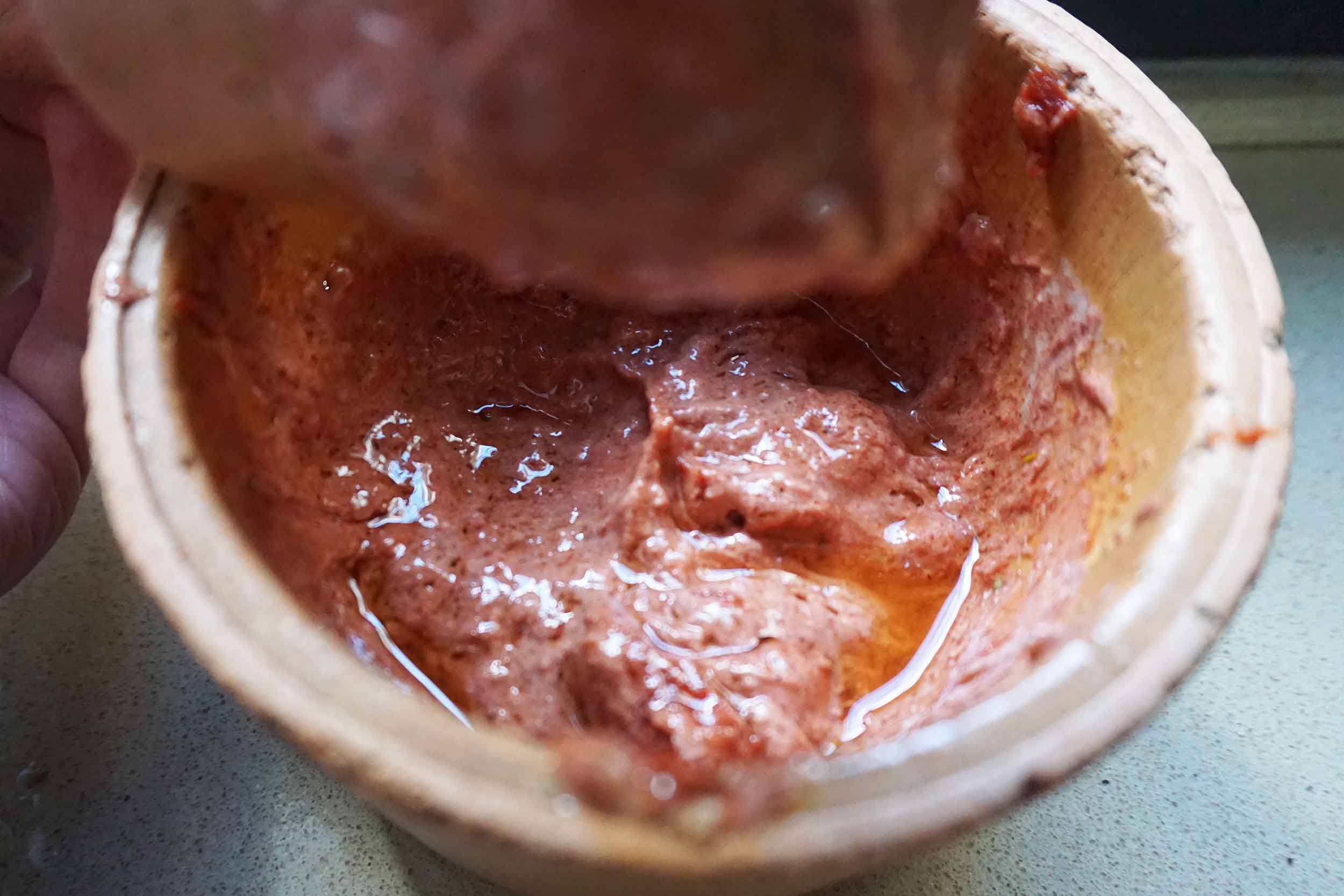 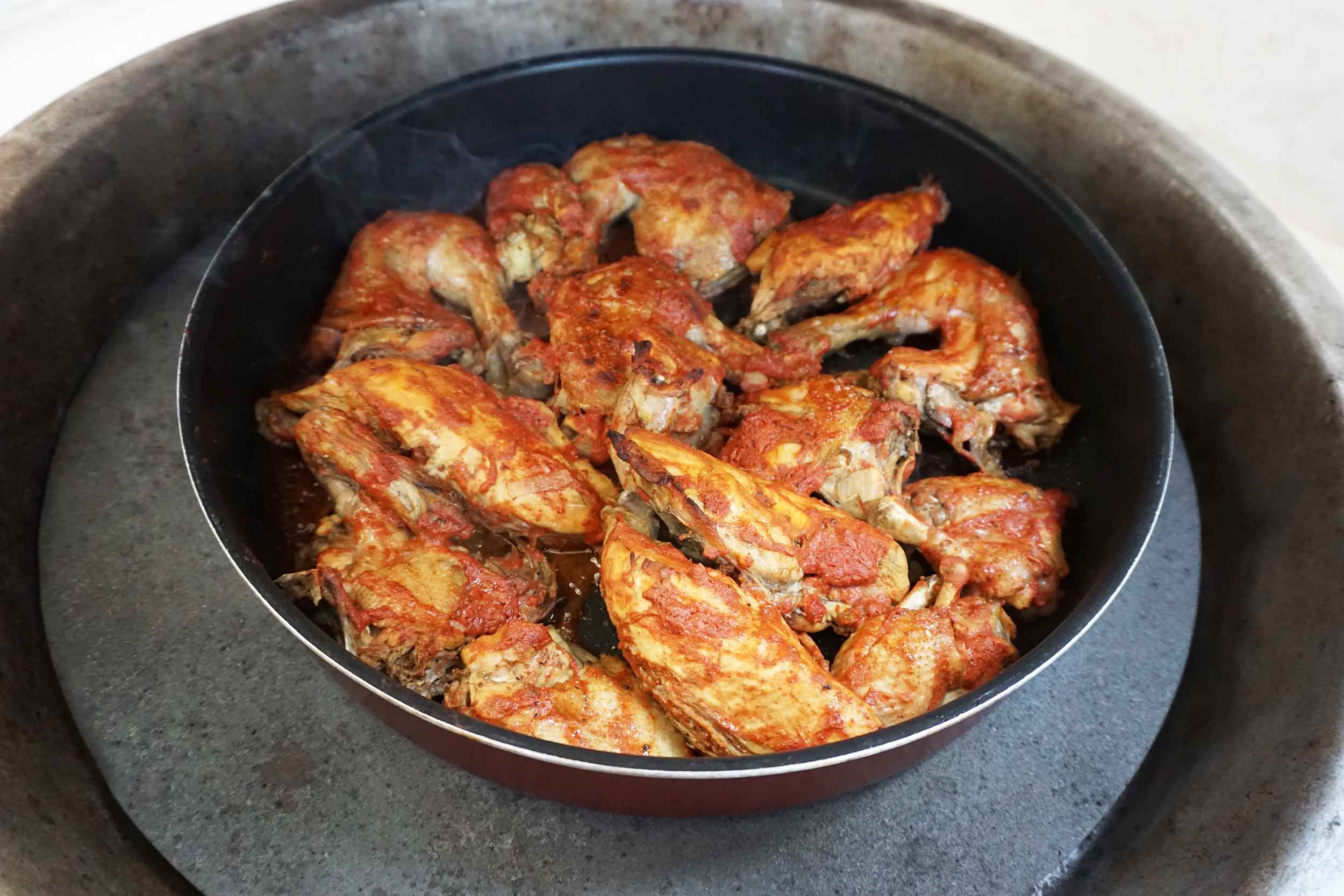 Finally we rest, sitting to sip thick cardamom coffee. Her younger daughter shows me her English textbooks, “Abeer lives in Palestine”, “Fatima goes to school in Jerusalem”… while the eldest challenges me with a game of words. How long are you staying in Palestine, she asks? I tell her I’m going back over the Green Line, the West Bank’s border with Israel, that evening, but she asks again, So how long in Palestine? I’m not sure how to answer. The distinction between both lands forever altering depending on who I’m talking to, and I see her challenge. I tell her, another 3 weeks. Another 3 weeks in Palestine, accepting to accept her definition. Israel or Palestine, the West Bank or Occupied Territories, words are an ever important game in a land where the distinctions are continuously in question.

Amani scoops yoghurt into little bowls, lays pickles and olives onto plates and sets them on the table. She piles tender parcels of warak dawali interspersed with slithers of melting onion onto a large metal platter and onto it she arranges morsels of red, crispy chicken. At last, we eat. 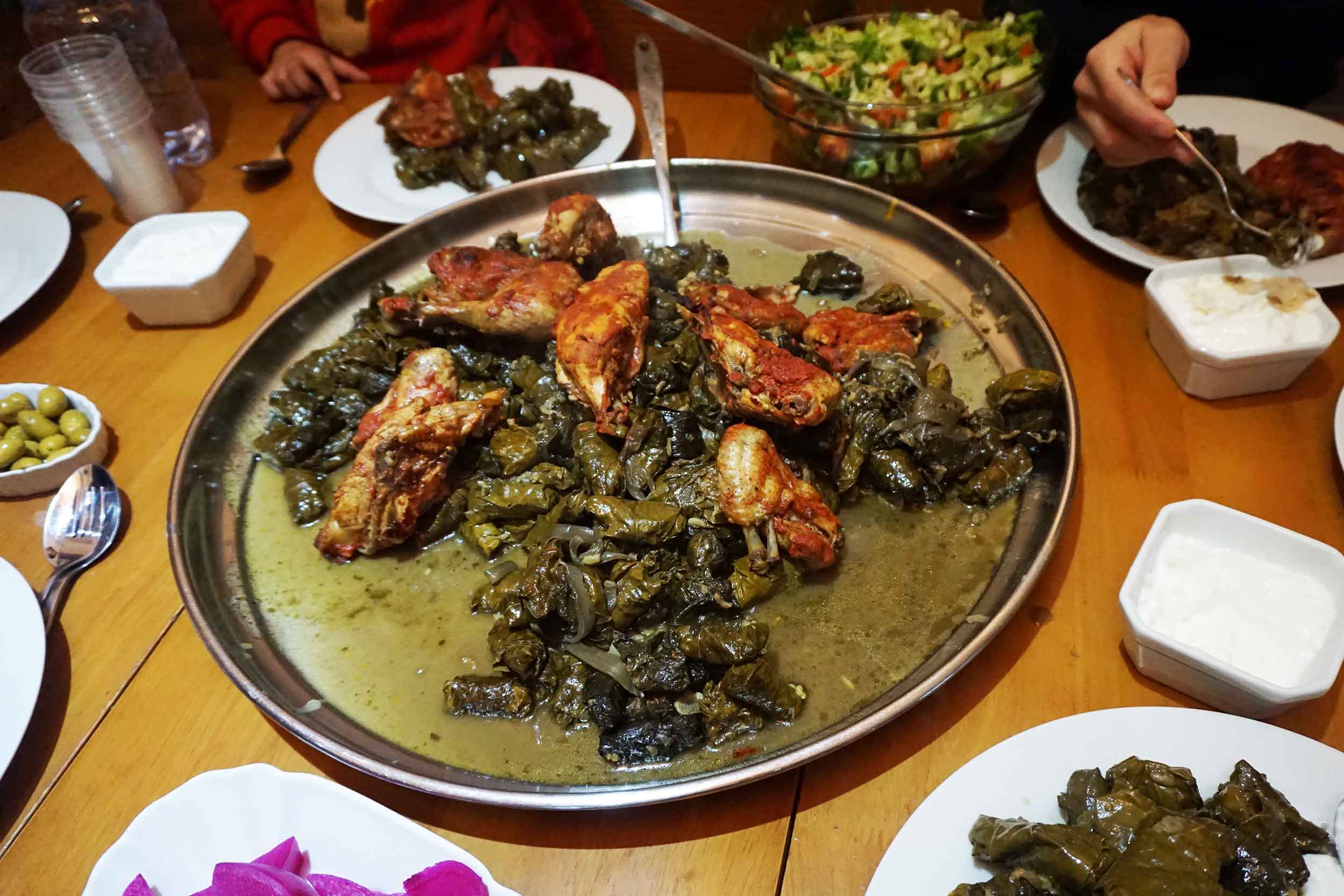 Carefully blanch the vine leaves and set aside. To make the filling, finely dice the tomatoes, peppers and parsley. Combine with the rice, spices and a good pour of olive oil.

To roll the vine leaves, place a leaf on the palm of your hand. Add a pinch of the filling – not too little but not so much that the leaf splits. Half a teaspoon is about enough – fold over the bottom and sides of the leaf, then firmly roll it up into a secure little parcel. Repeat until your vine leaves and filling are used up.

Remove the chicken and transfer to a roasting pan. Strain the broth into a bowl.

To make the marinade, peel and bash the garlic in a pestle and mortar with a pinch of salt, the spices and oil. Stir in the tomato paste and yoghurt, then pour over the chicken and toss well. Leave to marinate for an hour or so, or pop the chicken straight in the oven – around 180ºC – until golden and crisp.

Meanwhile, cook the vine leaves. Peel and chop the onion and garlic in the same pan the chicken was cooked (Amani uses a pressure cooker, but no worries if you don’t have one). Layer the stuffed vine leaf parcels on top, just cover with the chicken broth, then cover with a lid and cook gently until the rice is cooked through and has absorbed all those lovely juices.

Serve the warak dawali on a big platter, with the roast chicken on top, alongside bowls of plain yoghurt and pickles. Phew!