Slatko od dunja | Quince preserve. Peel and slice a kilo of quince into cubes. Heat a kilo of sugar with a small cup of water until it forms a golden caramel. Add the quince, tilting the pan to coat in the caramel. Don’t stir. Cook until softened. Transfer to clean glass jars.

The first time I tasted quince was oddly enough in northern Bosnia. I was staying with Mira, whose cornmeal porridge I wrote about before. It was late at night, the large outdoor fire pit was burning, and two of Mira’s chickens, golden, glistening and plump, were turning on the spit above a small pile of grey ash and smouldering wood.

It was then, the whole family crowded around the fire, that Mira emerged with a jar of quince preserve, known in Bosnia as slatko od dunja. Cubed orbs of soft fruit suspended in golden syrup. We each scooped out a piece, savouring its thick fragrance trickling down our throats before washing it down with a glass of water; the traditional start to an evening of feasting and rakia-drinking.

In Bosnia – like in every culture – food and folklore are intrinsically linked. It’s tradition to be given bread and salt as a new guest to someone’s home, as a sort of peace offering and assurance that they come with good intentions. Another, Mira tells me is the tradition of leaving a bowlful of ripening quince in the bedroom. “It’s the sign of a good wife”, she says, to allow the smell of quince’s mysteriously musky scent to permeate through your home. The Ancient Greeks believed quince to be a powerful aphrodisiac, and the fruit of fertility, love and marriage, so perhaps that has something to do with it. The 1982 Bosnian film – The smell of quince (Miris Dunja) – goes some way to showing how far this mystical fruit has woven its way into the Bosnian consciousness. A film, no less, that weaves a web of infatuation, desire and demise. 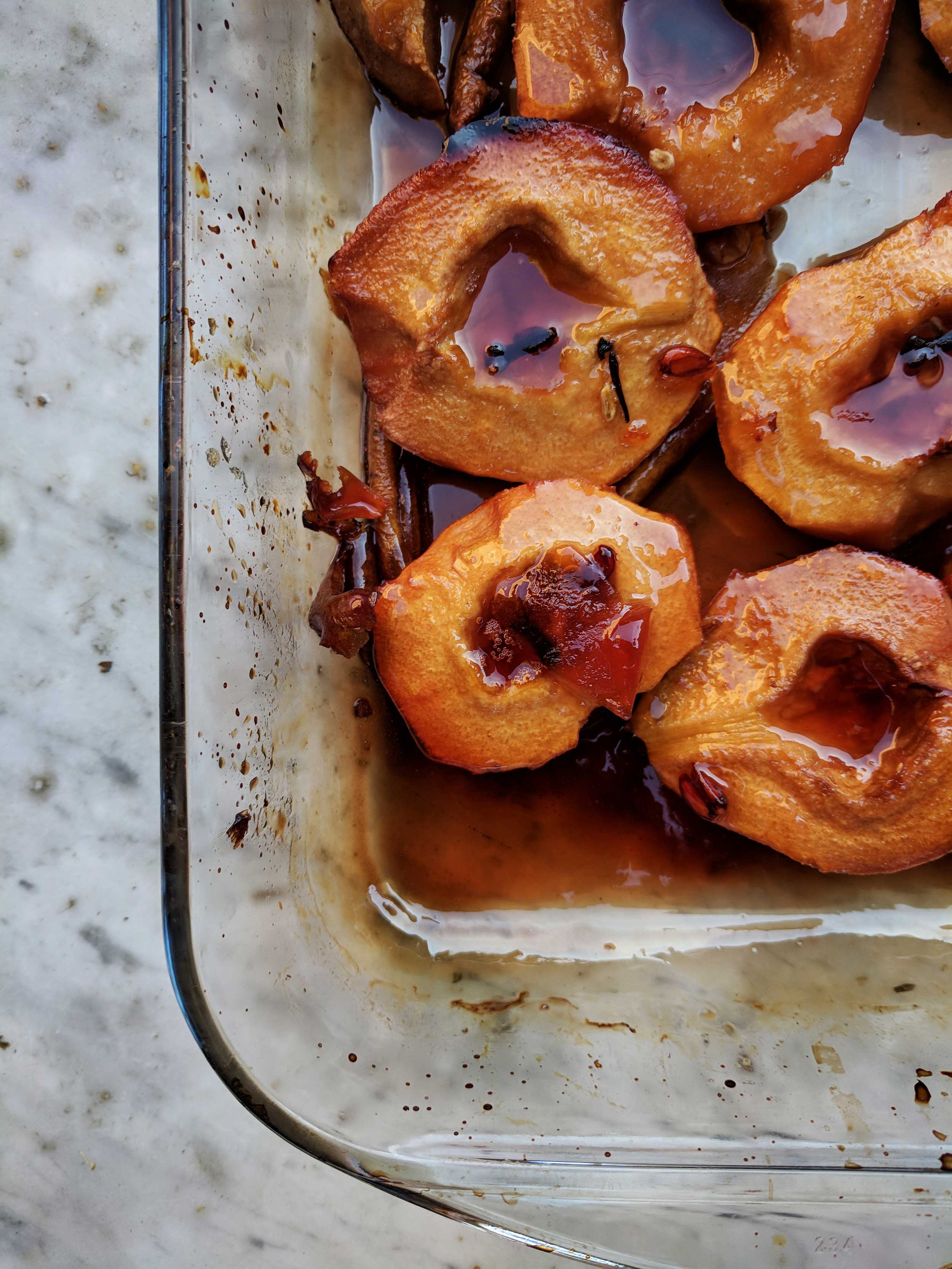 Unlike its humbler orchard companions – the apple and pear – the quince reeks of regality, taking on a subtle rose tint as it cooks and a flavour that matches in fragrance. For this reason, it goes well with equally bolshy flavours, like star anise, cloves and cinnamon.

You’d think quince would be a prized fruit in the UK as it grows well in our climes, and it was once. Somewhere along the line we’ve forgotten this noble fruit. I got hold of some this past autumn from Brogdale’s Fruit Collection in Kent where they grow thousands of heritage varieties of apples, pears, quince and medlars. I took a recipe out of Gather Cook Feast (a brilliant British seasonal cookbook), peeled and halved them, scooped out their pips with a sharp knife and lined them up, cut-side up, in a roasting dish with a heavy dose of sugar and one clove per quince half. The peel holds a lot of its fragrance so use it sparingly. I dropped a few pieces into the bottom of the dish, along with some water and a cinnamon stick. Covered tightly, the quince went into a low oven (160ºC) for about four hours until headily sweet and tender. It doesn’t soften as much as you’d expect from an apple or pear. Cut through with clotted cream, it was utterly delicious.