It was still daybreak when I took off. I passed by the orchards, made the rounds of the beaches, gained a fleeting acquaintance with the locale’s water, soil and air, and collected fragrant wild herbs that made my palms smell of savoury, sage and pennyroyal – Zorba The Greek

The Spring Equinox has just passed and with it the beginning of a new season. Spring marks new growth, the promise of warmer days and also (although we’re a good few weeks into it now), wild garlic season. Those pungent, dark green leaves that grow wild in wooded areas all over the UK signal the hiatus in our seasonal calendar when little else grows, and people go mad for them. Rightly so; their delicately sweet, garlic flavour is as delicious pulverised into a pesto as it is cooked with eggs.

Wild garlic aside, spring is also the time for lots of other edible greens. Young nettles and dandelion, lemony sorrel, wild mustards and mushroom-flavoured plantain. Edible greens that span a whole spectrum of flavour and nutritional benefits that we can eat, but have somehow forgotten to.

What gets me so inspired about wild growing greens is what they say about the human communities in which they grow. Foraging for wild garlic is not mainstream in the UK. Foraging for anything actually. It seems to be only ‘foodies’ and perhaps some countryside enthusiasts who do, but in other countries, wild greens are still actively cooked and eaten as part of the daily diet. Granted, this is increasingly the pastime of older generations. People who would have grown up eating wild things to sustain themselves through times of scarcity. But as with all embedded and celebrated food cultures, it’s this necessity that has formed the foundations of how and what people eat today.

Early last year, I spent a couple of weeks in Palestine and Israel. I watched as village women picked great bunches of mallow (translated roughly as hubeiza in Arabic and Hebrew) to put into soups or to fry them simply with olive oil, onion and lemon juice, and served with zaatar-dusted flatbreads. @PalestineHostingSociety is a wonderful Instagram account and project, run by Palestinian artist, Mirna Bamieh. She has educated me so much on how Palestinians eat and make use of wild greens that are still a huge part of the local springtime diet, layered into rice dishes or eaten alongside eggs, cheese and olives. 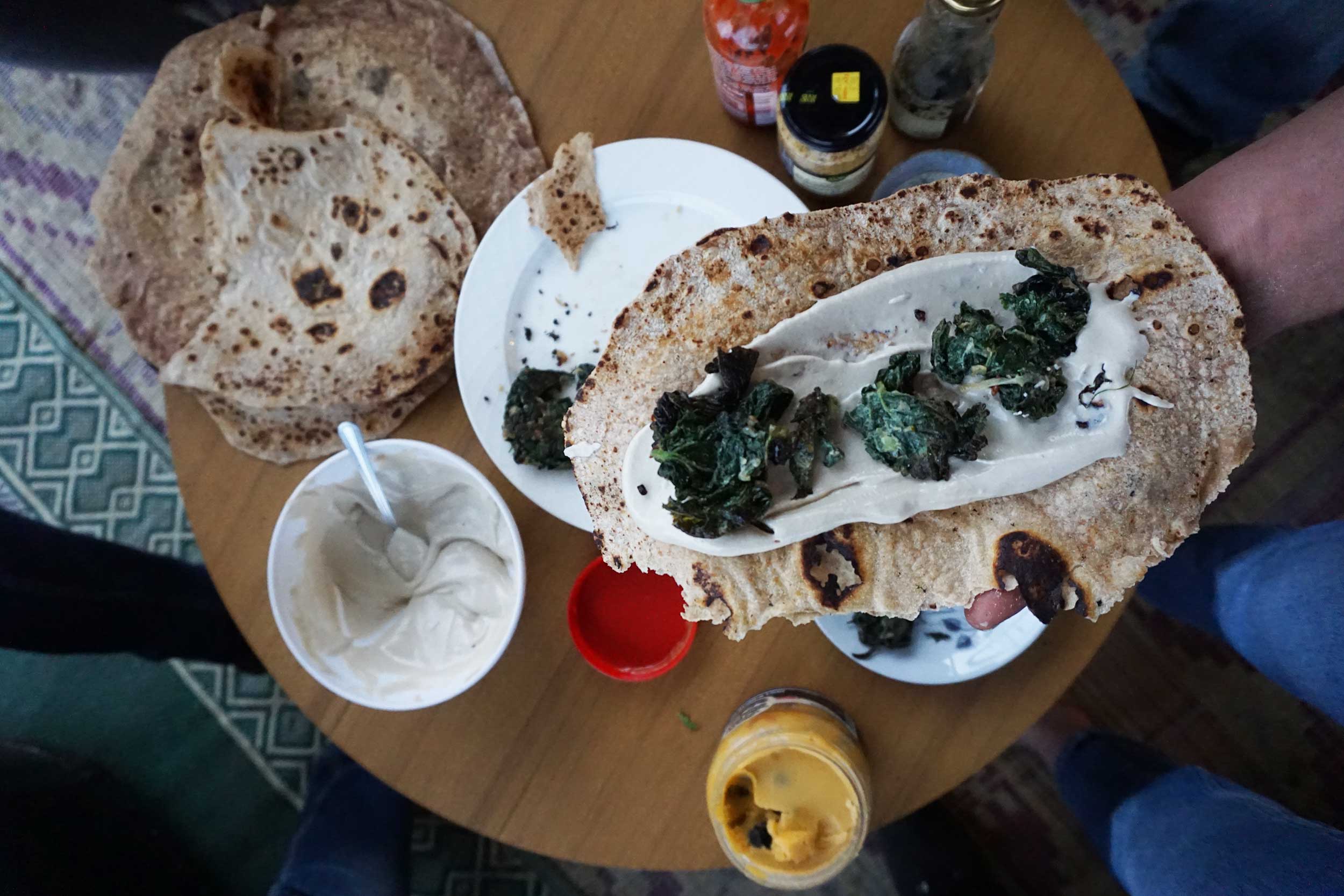 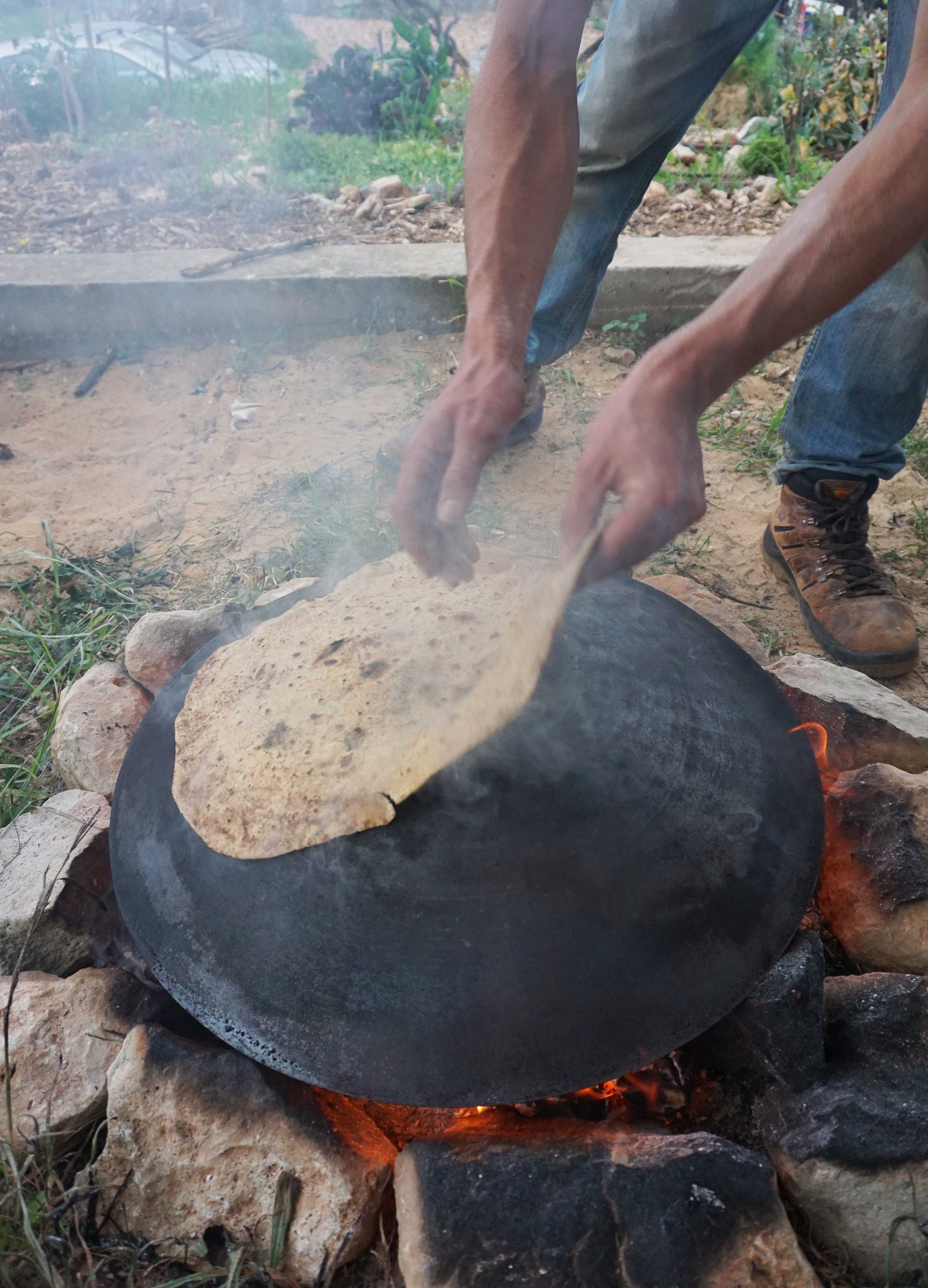 On the other side of the ‘green line’, I spent an afternoon in the countryside with some Israeli friends, tearing up great handfuls of mallow, picking the leaves, wilting them down and shaping them into cumin-spiced fritters. We made simple flatbreads, rolled out and charred over an open fire, before wrapping the whole lot up with lemony tahini. There was something so special about that meal, eaten outside next to a gentle fire in the warmth of a February afternoon that I’ll never forget.

Journey westwards to Greece where horta is the catch-all term for wild greens, which goes to show how important they are to local diets. A Greek-Cypriot friend of mine and talented cook and writer, Georgie Hayden has a recipe that makes use of these greens. Hers, when she cooked it, comprised of dandelion, amaranth, roka (wild rocket) and dill, and I’m not sure what else, stirred through a big steaming pan of scrambled eggs.

Nearby, you can find Turkish women making flatbreads, stuffed with the many wild greens that grow abundantly in these lands. These gozleme have found their way into Turkish bakeries and cafés all over Hackney where I live in east London. You can spot them by the women sat in the window, rolling, stuffing, folding and cooking gozleme after gozleme on large round hot plates. I like to buy them fresh, the dough hot, chewy and slightly oily, with its spiced greens and tangy fresh cheese spilling out everywhere. These London versions are probably stuffed with cultivated spinach, but I still think it magical that a seemingly innocuous wrap so popular in east London has its roots in the wild hillsides of Anatolia. 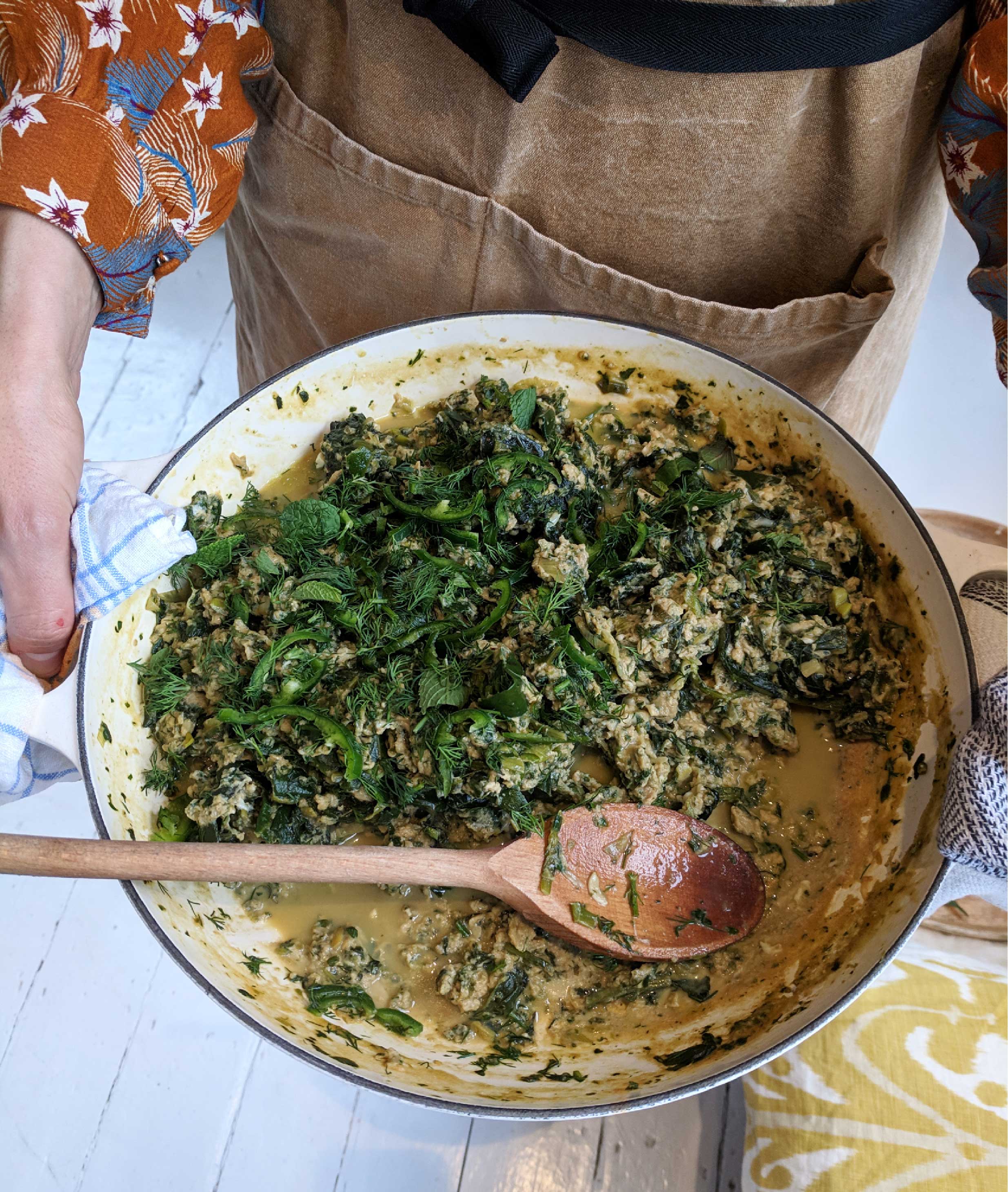 Wild herbs not only add flavour and nutrition to our food, but medicinal care too. It was once common knowledge which wild things could help which ailment. Fennel was used as a natural contraception, St. John’s Wort as an antidepressant, cleaver to help water retention. In a world without pharmaceuticals, the power of wild plants to cure and aid our development was a given, and one that we humans relied upon.

Foraging for wild greens, in the UK anyway, has a chequered history. With the Inclosure Act of the 1700s that saw the British countryside parcelled up into private ownership, the question of picking wild edibles became problematic. Who owns what? Suddenly going out to pick your dinner wasn’t so straightforward. New rules had to be written. It might surprise you to learn that it isn’t illegal to forage on someone’s private land. Nobody is legally entitled to the edible things that grow wild on their property (planted apple trees are different!). But is it ever socially acceptable to stomp into someone’s back garden to pick their blackberries?

This got me thinking about how the act of foraging is problematic when tied to notions of land and one’s ownership over it. Something that is starkly obvious in Palestine for example (read this). How things have changed since Sapiens were nomadic hunter gatherers! The concept of owning land is a relatively new one in human history, but I’m sure it’s had an impact on how we relate to the natural world around us. Certainly, our eating habits have had to adapt.

A shame really, when to think that picking and eating wild greens formed the very foundations of how humans ate, celebrated the seasons and came together as communities. It’s not gone completely of course, and threads of its importance show up now and then in the recipes and dishes we still like to eat now. The making of gozleme, that wild garlic pesto, even the Thai dish of Geng Keh I have previously written about here are among the many dishes that have been inspired by wild greens.

Perhaps next time you go to add spinach to your pot, just take a moment to think about how it would taste with the springtime greens growing wildly, even now, in your back yard.

PS. Annie Levy, her blog Kitchen Counter Culture and IG have inspired me no end in the quest to understand food, the incredible power of wild greens and the politics that informs our eating habits and vice versa (as well as some adventurous fermenting experiments!). Here’s a Nettle & Sorrel Soup recipe of hers you really should try.