Baladi is an important word in Palestine. It sits somewhere between the English words of local, original, from-the-village and authentic. It is tied to notions of place and belonging, and it’s a word that’s used a lot. This is baladi food, I was often told. It’s Palestinian, it’s from here. Baladi food, in a land as contested as this, holds importance. Because what better way to tell the origins of place and people than through what we eat?

I’m in Ramallah to meet Haifa. A home-cook and advocate of the Slow Food movement in the West Bank. I’ve travelled up from Jerusalem on one of the Palestinian buses that journey frequently between the capital city and these Occupied Territories. A crossing that through the havoc of checkpoints and security checks takes several hours longer than it really should. Haifa’s daughter, Reem, picks me up outside Eiffel Sweets café (actual name), along with another Slow Food campaigner, Fareed, who has helped to arrange this meeting. We drive up and out of Ramallah city itself, snaking our way up the arid hillsides that surround it to what looks like a small settlement of new builds. Multi-story complexes that house extended families all under one roof.

Haifa is stuffing baby courgettes when we arrive. Hair secured back and spoon in hand, she works purposefully, collecting from a round, shallow dish piled high with a mixture of rice, minced lamb, chopped parsley and the heavy spices of cinnamon and ground cardamom, turmeric and black pepper that are so characteristic of Palestinian and Arabic cooking. Her kitchen is spotless. Shelves sit tidily, showing off jars of dried herbs and balls of labneh suspended regally in olive oil. Haifa hands around a jug of potent, sweet pomegranate juice, and we gather in her modern, spacious kitchen, joined by her second daughter, Rasha. Everyone is speaking a mix of Arabic and broken English, taking time to translate and explain everything. 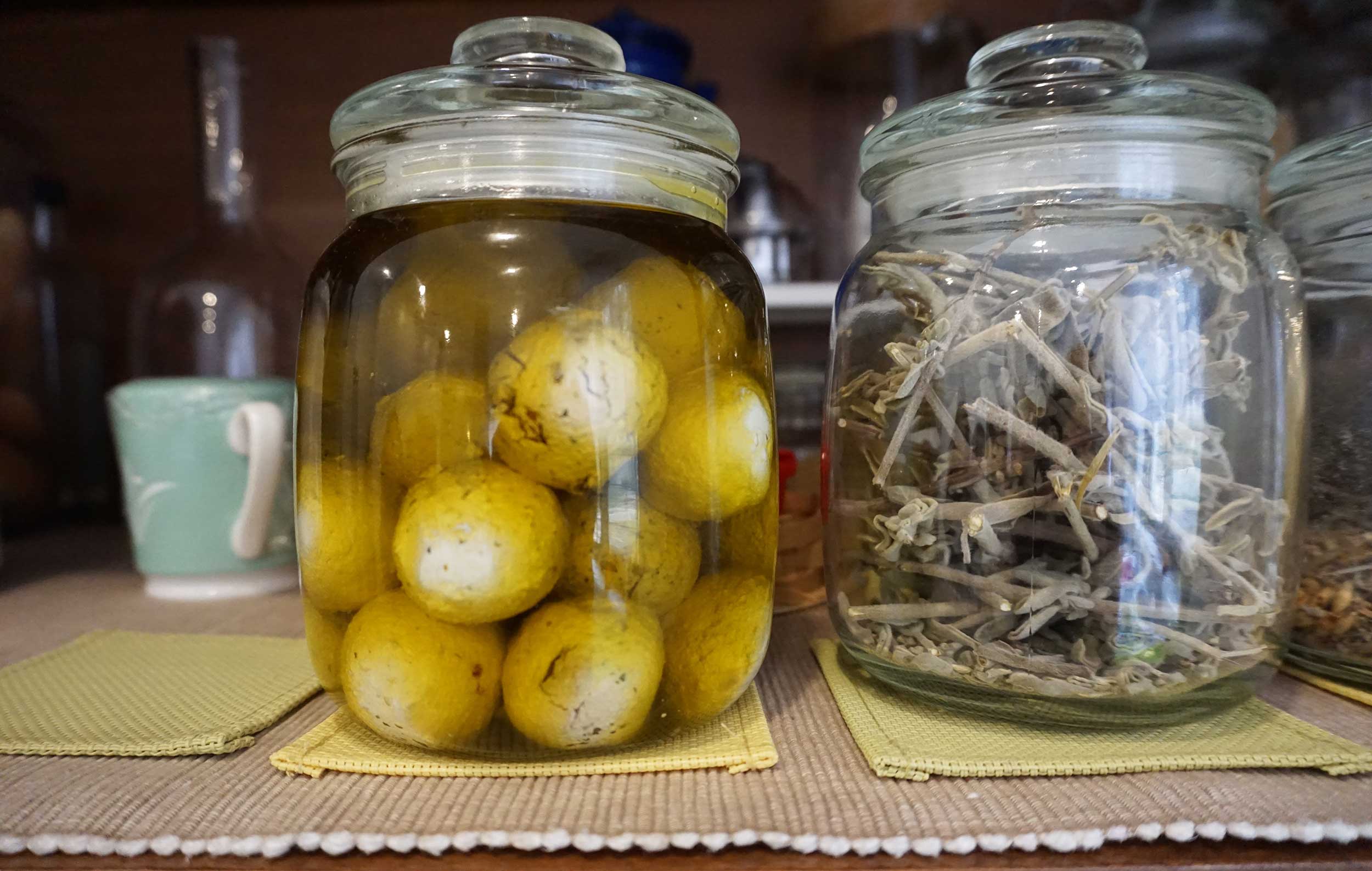 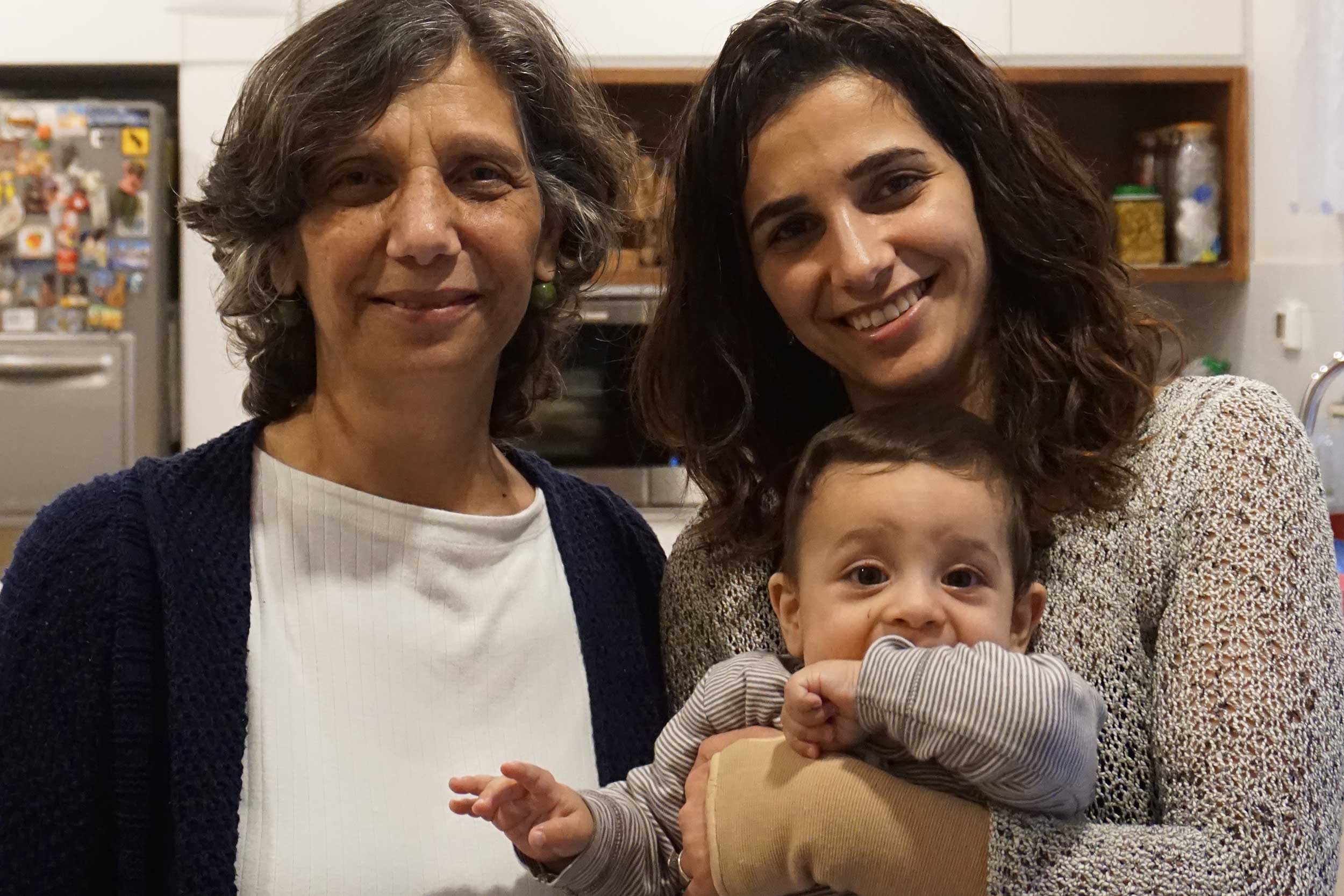 The habit of stuffing vegetables or leaves is widespread in this part of the world. I’ve written before about stuffing vine leaves in Palestine and a variation with cabbage in Armenia, but as delicious as they are, they’re not what I’m here to talk about. It’s the bowl of leftover courgette flesh (the byproduct of stuffing veg) that I’m interested in, and what will provide the springboard for the feast Haifa is about to prepare. Haifa moves around her kitchen, picking off spices – ground coriander and cumin, dried mint, chilli flakes and turmeric – and throwing them into a bowl with torn stale pitta, courgette flesh and beaten egg. She mixes it together, and drops spoonfuls of the mixture into the heat of a sizzling pan. A’ja bread fritters are a common feature of the Arabic kitchen. I’ve made them here before (Ottolenghi’s Jersualem cookbook) and while they were good, Haifa’s are undoubtedly better.

Fatte is a dish that follows a similar rule. Literally translated from the word fatta in Arabic, which means ‘to crumble or break bread into small pieces’, this is the embodiment of frugal cooking. Fatte is essentially bits of stale bread, revived in the hot liquid leftover from simmering meat, beans or vegetables, and topped with a lemony tahini and yoghurt sauce. Torn chicken, vegetables or chickpeas might find their way in, depending on what there is to hand. “Anything with bread is fatte”, Rasha explains. 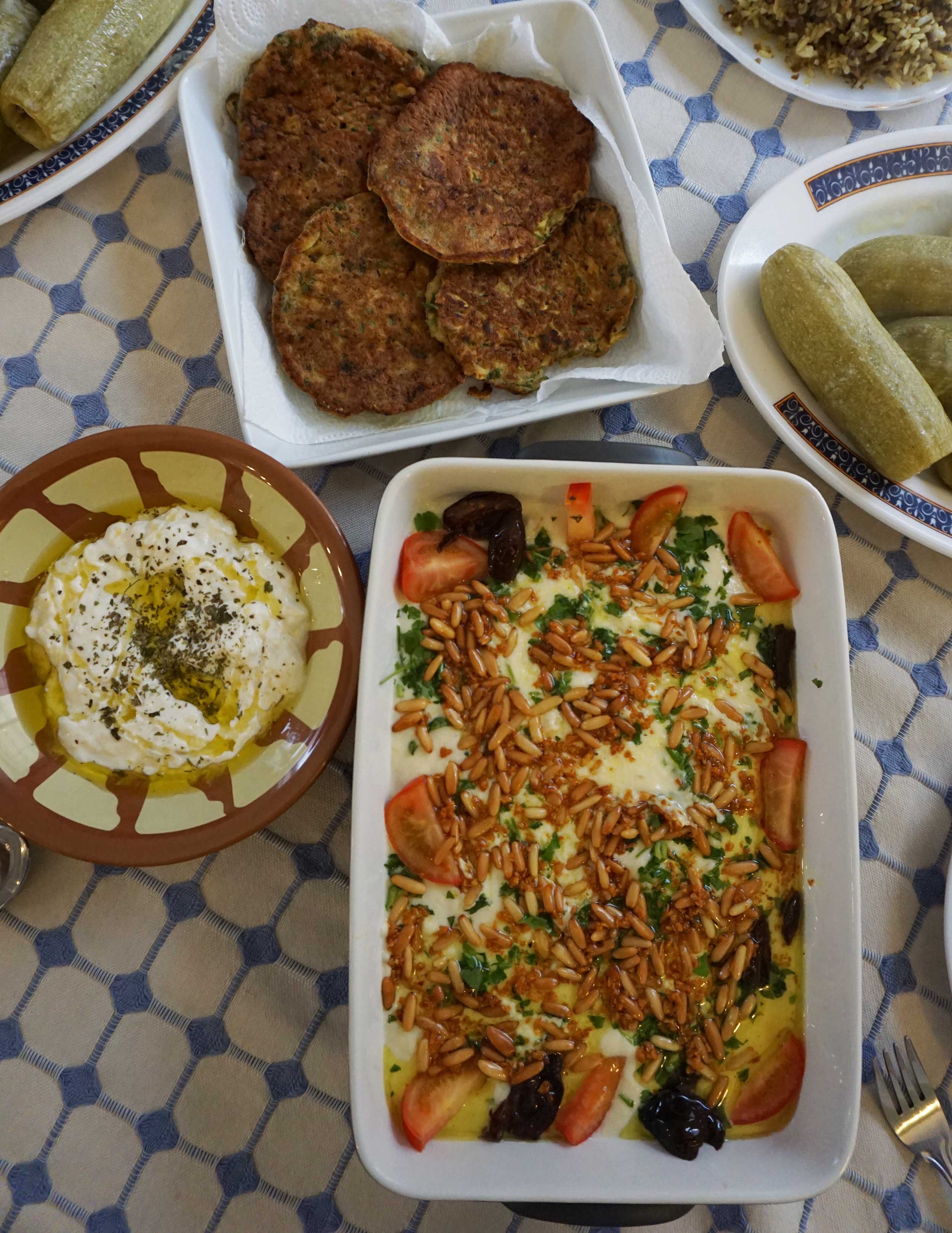 Bread – or more precisely, the alchemy of grain and water when cooked – has featured in human diets for centuries, and so it makes sense that methods to use it up have formed the basis of what and how we eat, in cultures as distinct as Palestine and Italy, Mexico and Azerbaijan. So much so that in the Arabic-speaking world there is fatta; a single word to describe the action of using it up. Fatte and a’ja fritters, just two examples.

Rasha describes chicken fatte, in which the stock leftover from cooking chicken is used to soften and revive stale bread (this is the base layer). The same chicken stock is mixed with yoghurt, garlic, chilli and lemon juice to make a sauce that’s doled out on top. The stock is also used to cook the rice, which provides the third layer. Shredded chicken is then piled on top into what I can only describe as a multi-layered one pot dish of flavour-soaked deliciousness. 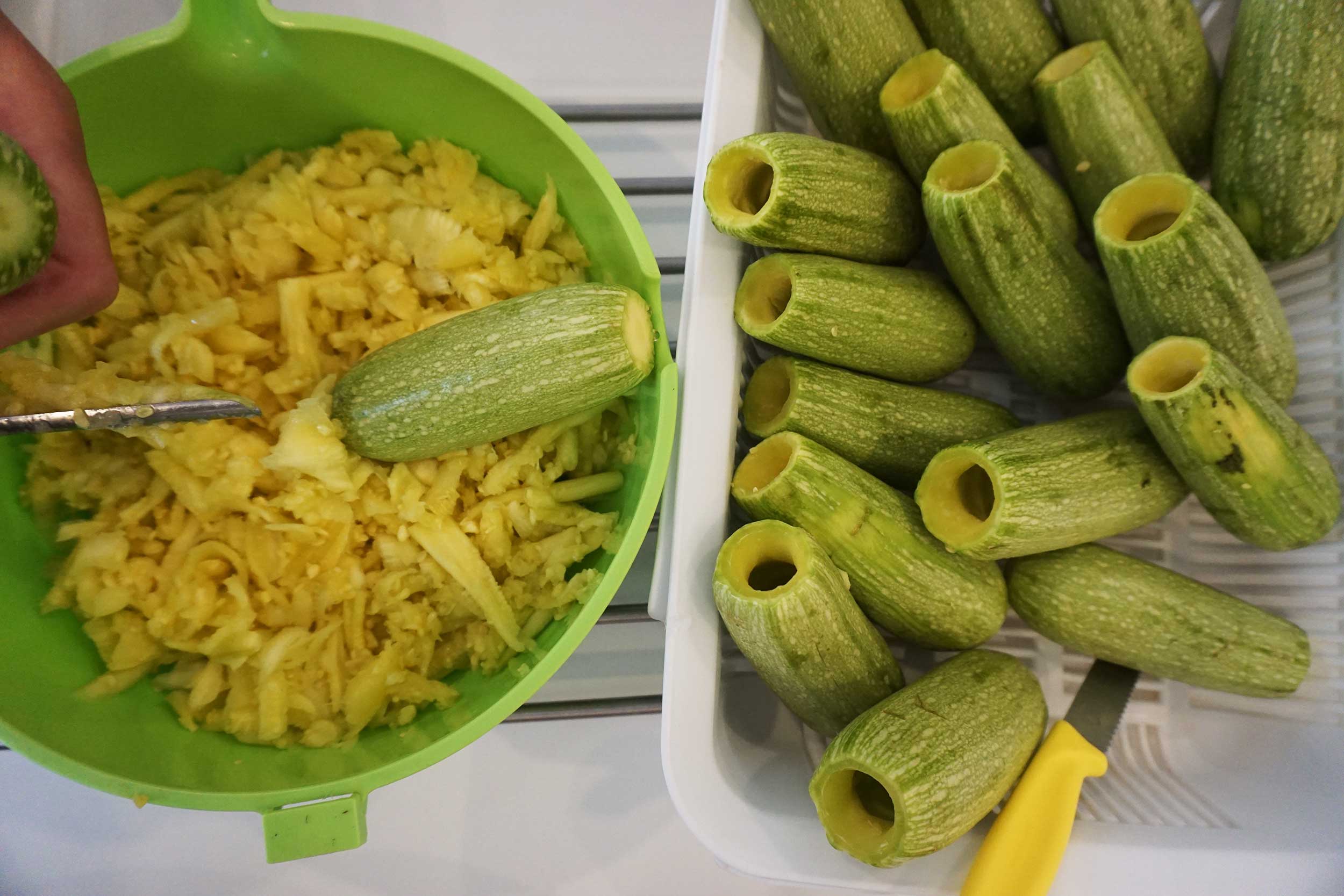 Today, Haifa boils up more leftover courgette with salt and garlic, then sieves the hot liquid over torn pitta. She leaves it to soak and soften. I mix the cooked courgette with lemon juice, tahini and yoghurt. While we cook, we talk about food. Where this and that recipe comes from, whether it’s northern Palestinian or from the south. We talk about the types of wild greens the elders forage for in the villages, and the oil procured from Fareed’s olive trees. The smell of fermented butter, smen, drifts over the kitchen, to which Haifa adds pine nuts and garlic and chopped parsley. I explain that I’ve been spending the past week helping an Israeli chef write her cookbook in English. “We have big problems with Israelis claiming it’s their food, when really it’s Arabic.” Fareed responds.

What is a recipe, then, if not a simple set of cooking instructions? Here, it is certainly more than that. An historical record? Evidence of origin or ownership? A political document? “In Palestine, baladi is not just about the food itself, it’s about the land it grows from. The struggle is only about land, and the Israeli government is using different methods to confiscate it from us.” says Fareed. In this context, do recipes matter more than ever? Some might argue the point redundant. Ingredients and cuisines have migrated and merged with other ingredients and ways of cooking for as long as humans have been around. Does anybody really ‘own’ anything?

But I get it. My time in Palestine and in Jerusalem opened my eyes to a way of living that I’d never experienced before. It is a place where identity is continuously called into question, where the fight for land is real and stark (some personal experiences here and here) and where ownership of everything born from that land, from food to culture to the writing of history, is fiercely fought over. Existence here feels fragile and uncertain. Was Haifa showing me how to cook fatte simply because it tastes good or because it’s representative of a past that she wants to uphold and protect?

Haifa pours the heady garlic, parsley butter over her fatte, ready to set onto the table. Food is what we enjoy in the present, but its links to memory and nostalgia, to our past and History are undeniable. And in places such as this one, food – preserved in the scrawl of a recipe – matters more than ever.

Follow the link here for Haifa’s blog, including this fatte recipe, as well as tonnes of her recipes. Most are in Arabic but some are in English, and Google Translate might help you out too.