The first time I met Irit, she was running around her tiny hole-in-the-wall caff, blistering aubergines and squeezing oranges, chopping salad and plonking plates onto tables. All the while screeching Hebrew greetings and orders to her customers (most of whom she knew). Her long grey hair was scraped into a messy bun and she wore a t-shirt that said I DO WHAT I WANT on the back. She is one of those people that you can’t not like.

Irit has a little place in the Yemenite quarter of Tel Aviv, just behind the main shuk. It’s a quaint neighbourhood of one-story buildings with flat roofs, that make it easy to imagine the old Tel Aviv. The one before skyscraper hotels and shopping malls. In Hebrew, the area is also called Kerem HaTeimanim, which translates as Yemenite’s vineyard. I like that. Irit grew up here, after emigrating from Yemen, and still remembers a time when camels and cattle would swagger the streets. It’s hard to imagine it now, but from Irit’s little place, you can almost do it. 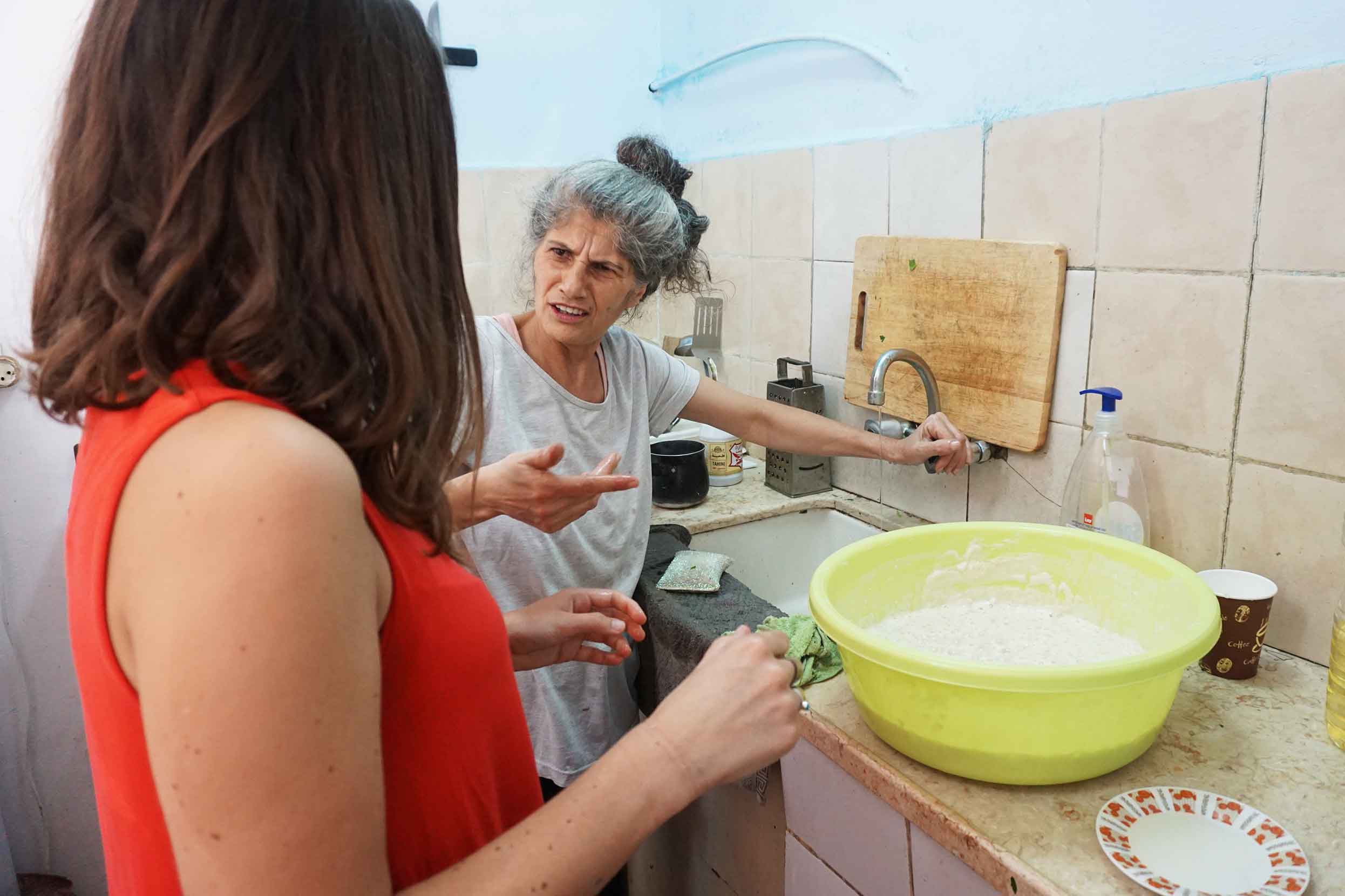 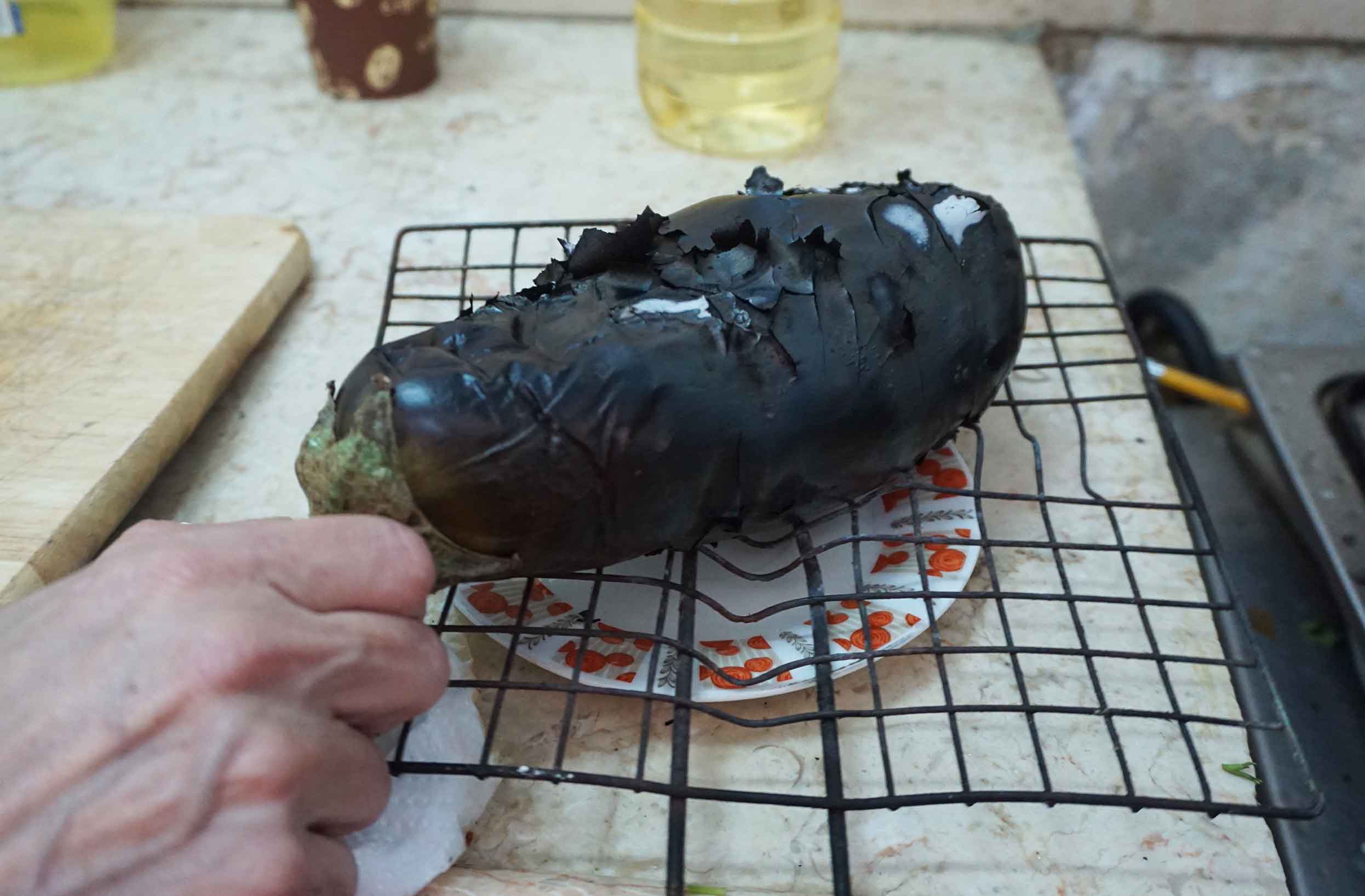 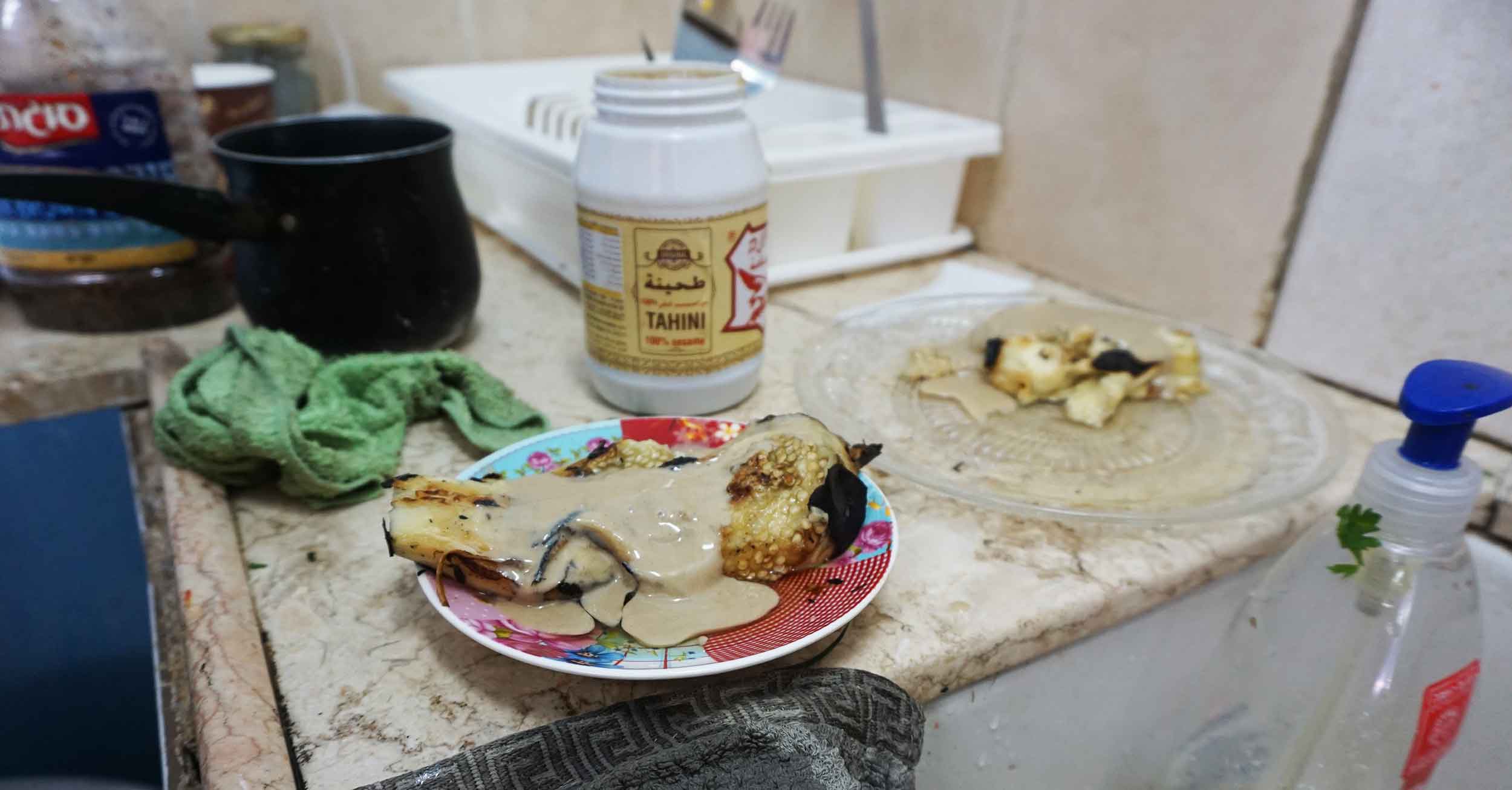 I found Irit thanks to my pal Debbie who’s known her for a good while. We get there one Friday morning (a day off in Israel), hungover and tired. There are no tables free yet, so Irit gets us squeezing lemon juice, serving shakshuka (the best I’ve ever tried by the way) and making lachuch. This is the real reason I’m writing this. Because lachuch is a Yemenite crumpet-pancake that is quite simply, hangover comfort heaven.

It’s a basic mixture of flour, yeast, salt and fenugreek, left to rise and bubble for an hour before being fried into an airy pancake. It’s comparable to Ethiopian injera, I suppose. But this is crispy. And has an egg in the middle. Fenugreek is optional here, but Irit uses it to make hers extra airy and light (thanks to its fermenting properties). I like the taste but some don’t, so use it at your discretion.

Irit has the batter rising in a corner. The day’s humidity doing its job as bubbles appear, crackle and pop on the surface. It’s been sitting for an hour, and she insists that any longer will ruin it. She stirs the gloopy, airy mixture with her hand, while a pan (with oil) heats on the hob. Her trick is to stir in one direction only, either clockwise or anti-clockwise, but never both. She scoops out a ladleful of the batter, slops it into the pan and tilts it so the mixture spreads and covers the base in a thin layer (left in the below pic).

Little bubbles appear on the surface as the base sets and browns. Don’t be tempted to flip it. Cook it until the lachuch is completely set. At this point, you can do as you please. It’s a pancake, and a yeasty one at that. Not as pliable as a dosa, but still able to be folded. Irit cracks an egg onto it, then folds it up and allows the hot pocket to cook the egg (see above right). 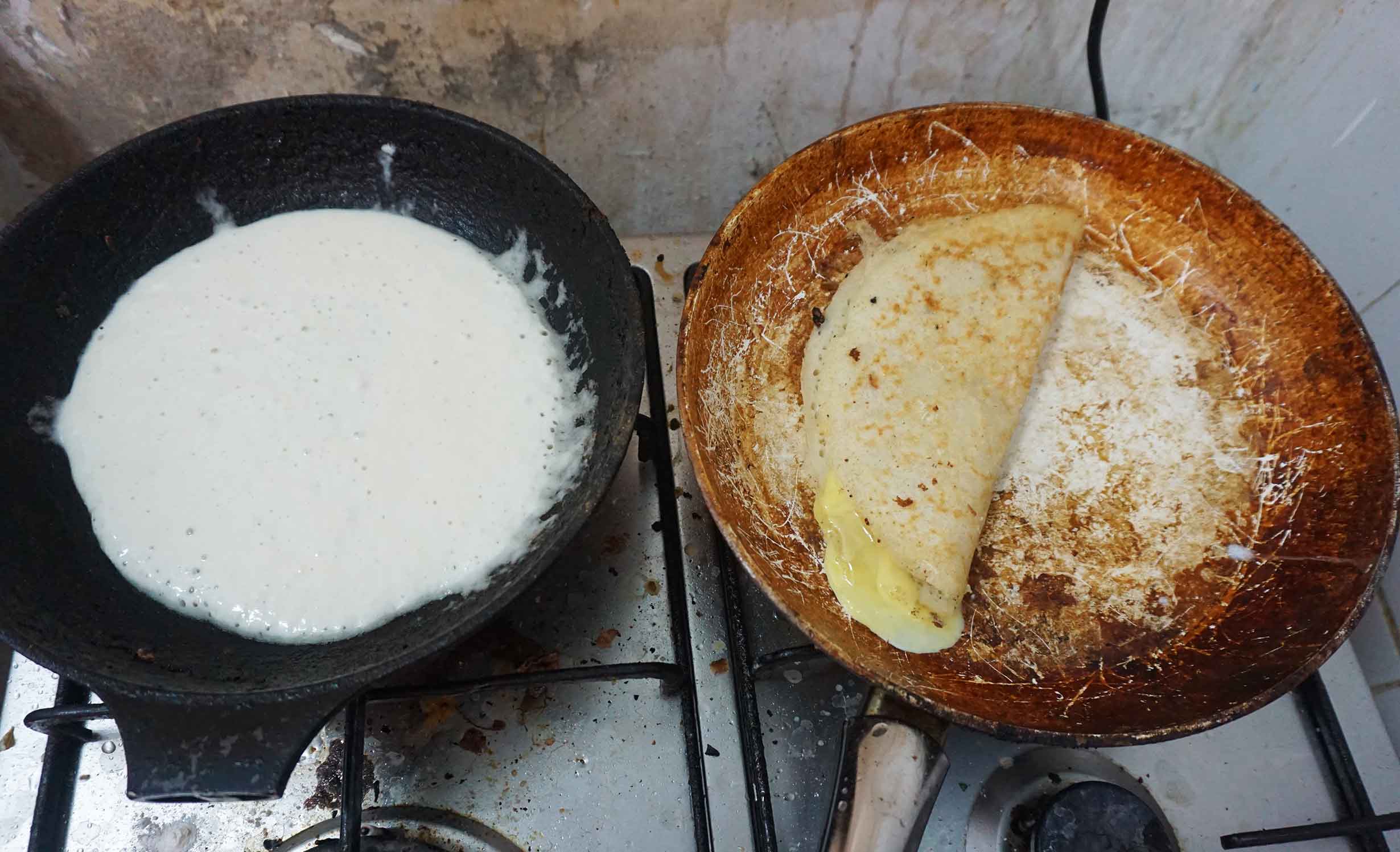 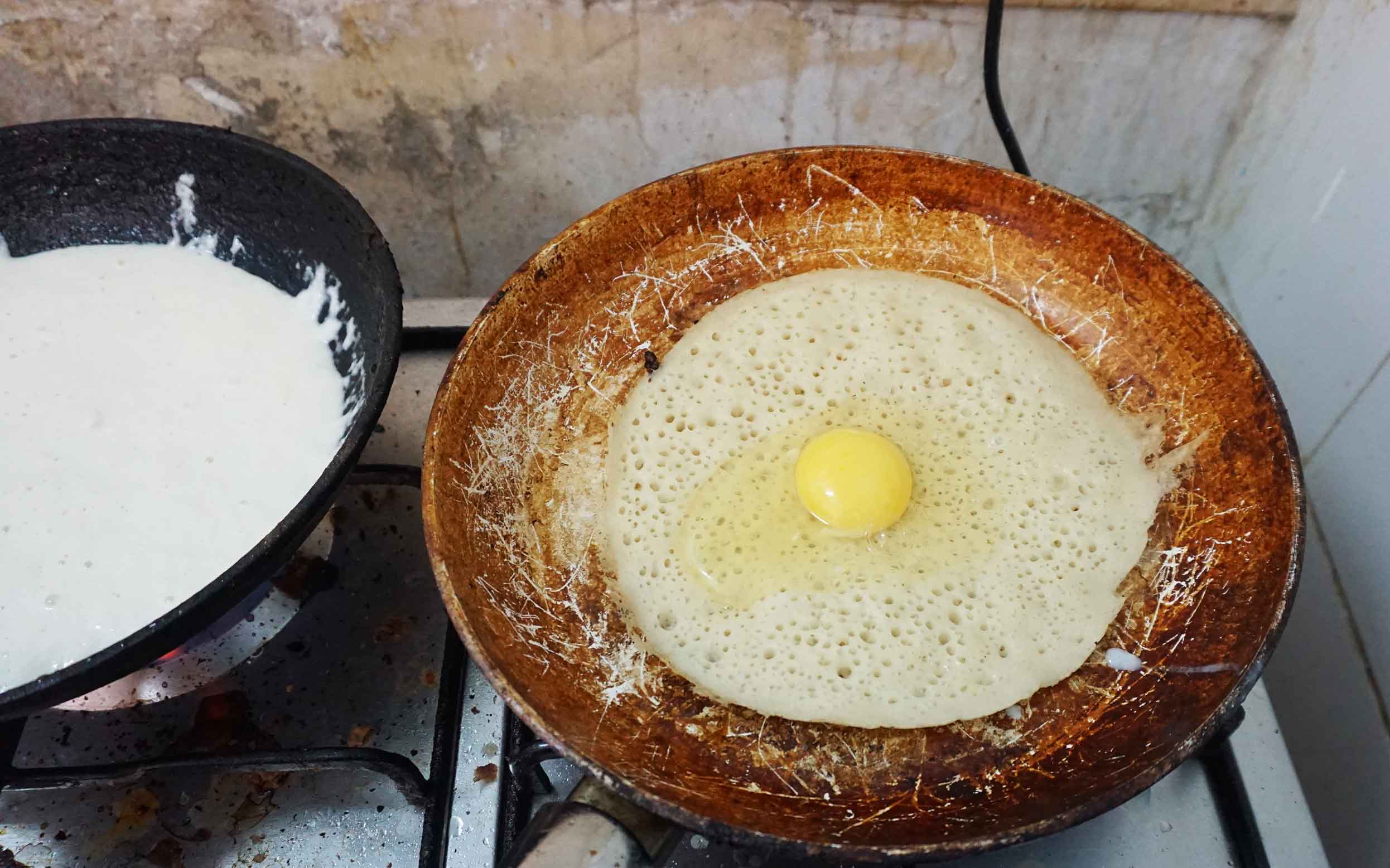 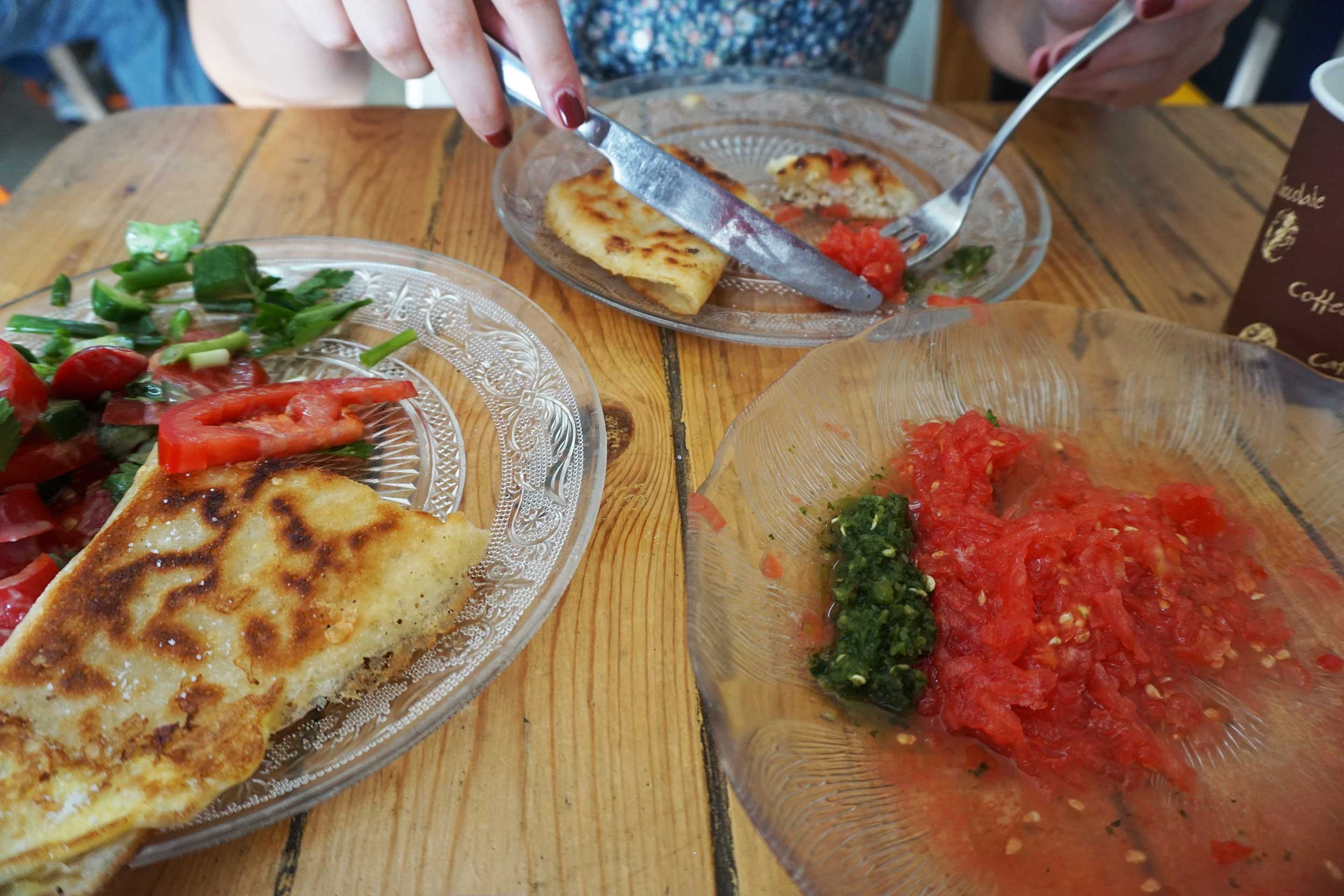 This is delicious, and if you’re in your right mind, you’ll stop there (!) But you could add chopped greens and chilli, and follow the same rule. Or grate cheese into it, or serve it just on it’s own with stuff to spread and dip. Try it with lemony tahini or zhoug; a fiery Yemenite relish which I made over here, and grated tomatoes. Ideally, serve it with all of these, as well as with burnt aubergine, and a fresh, crunchy red pepper, cucumber and tomato salad. Irit your heart out.

Place all the dry ingredients into a bowl, then gradually add water, stirring continuously (either clockwise or anti-clockwise) in one direction, until it forms a loose batter – about the same consistency as making pancakes. Cover with a damp tea towel, then leave in a warm place for 1 hour to bubble and ferment.

Once ready, heat a frying pan with a good splash of oil. Stir the batter mixture with a clean hand, then add a ladleful of the mixture to the hot pan, tilting the pan or using the base of the ladle to spread it out into a thin layer. Cook until golden on the bottom and little bubbles appear on the surface.

Crack an egg into the centre, then use a spatula or fish slice to fold the pancake in half. Continue cooking over a low heat until the egg is cooked in the middle. Serve hot as you go, with fresh salad, tahini, or zhoug.

Till the next time…
If you’re not planning on eating them all, omit the egg and keep the lachuch for a couple of days. Simply reheat in a pan, and serve as you like.
For more of the dolloped and fried variety, try these Jerusalem a’ja bread fritters.