Fittingly, I’m re-reading a brilliant book by home-cook and writer, Patience Grey, called, Honey from a Weed: Fasting and Feasting in Tuscany, Catalan, the Cyclades and Apulia. It’s a book of humble cookery, tradition and folklore from her travels across Italy, Catalonia and Greece. The recipes are simple celebrations of true cucina povera – peasant cooking that must have been quite exotic in 1980s Britain. 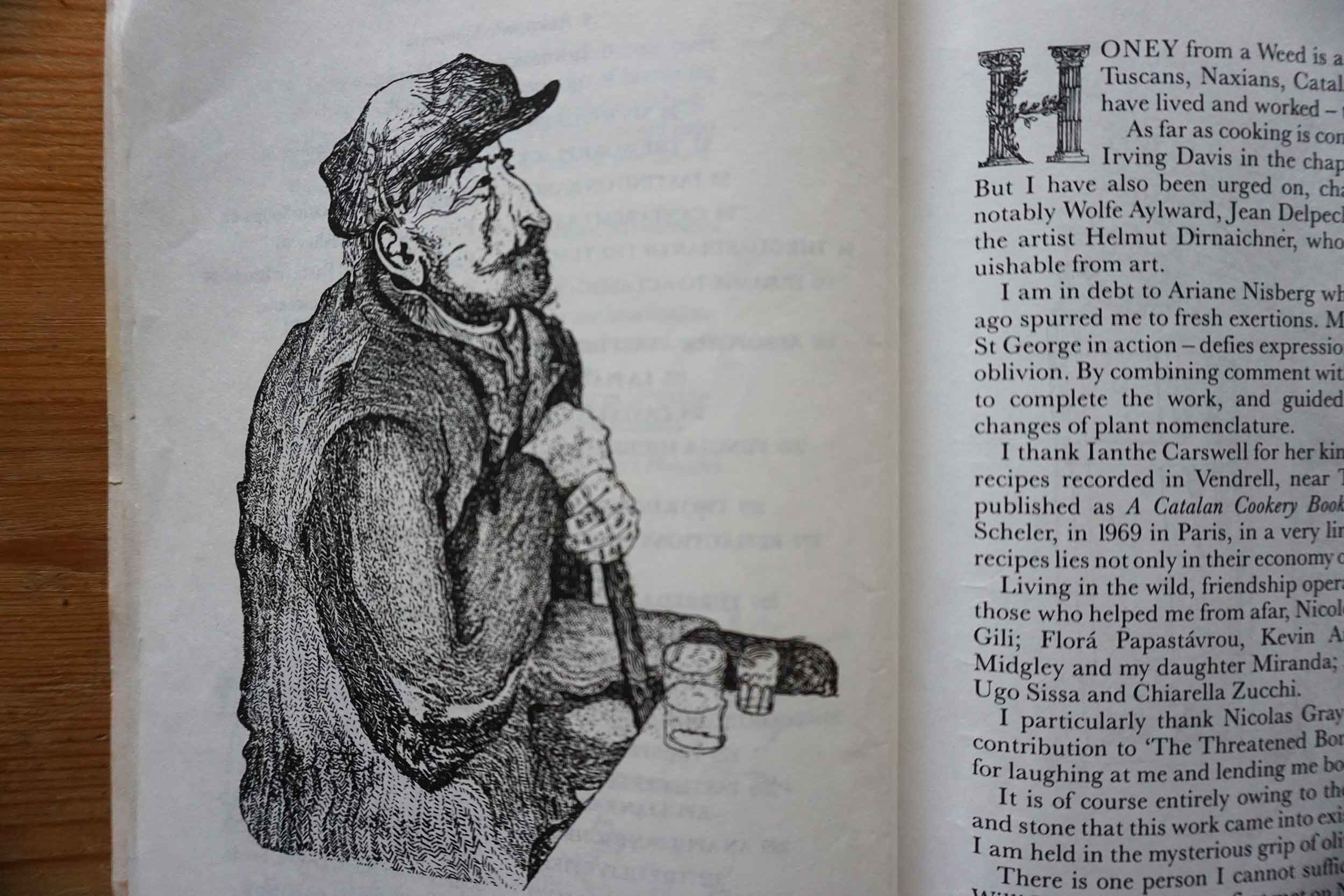 Good cooking is the result of a balance struck between frugality and liberality[…] It is born out in communities where the supply of food is conditioned by the seasons. Once we lose touch with the spendthrift aspect of nature’s provisions epitomised in the raising of a crop, we are in danger of losing touch with life itself.

Fasting and feasting with the seasons is an ideal that we’ve fallen out of love with. Eating only what grows in season feels like a self-imposed restriction. A leash on our enjoyment of good food. But as Patience so nicely demonstrates, we’re missing the point. She writes about the celebrations of harvest, the weight of respect given to nature, the beauty of both plenty and scarcity. 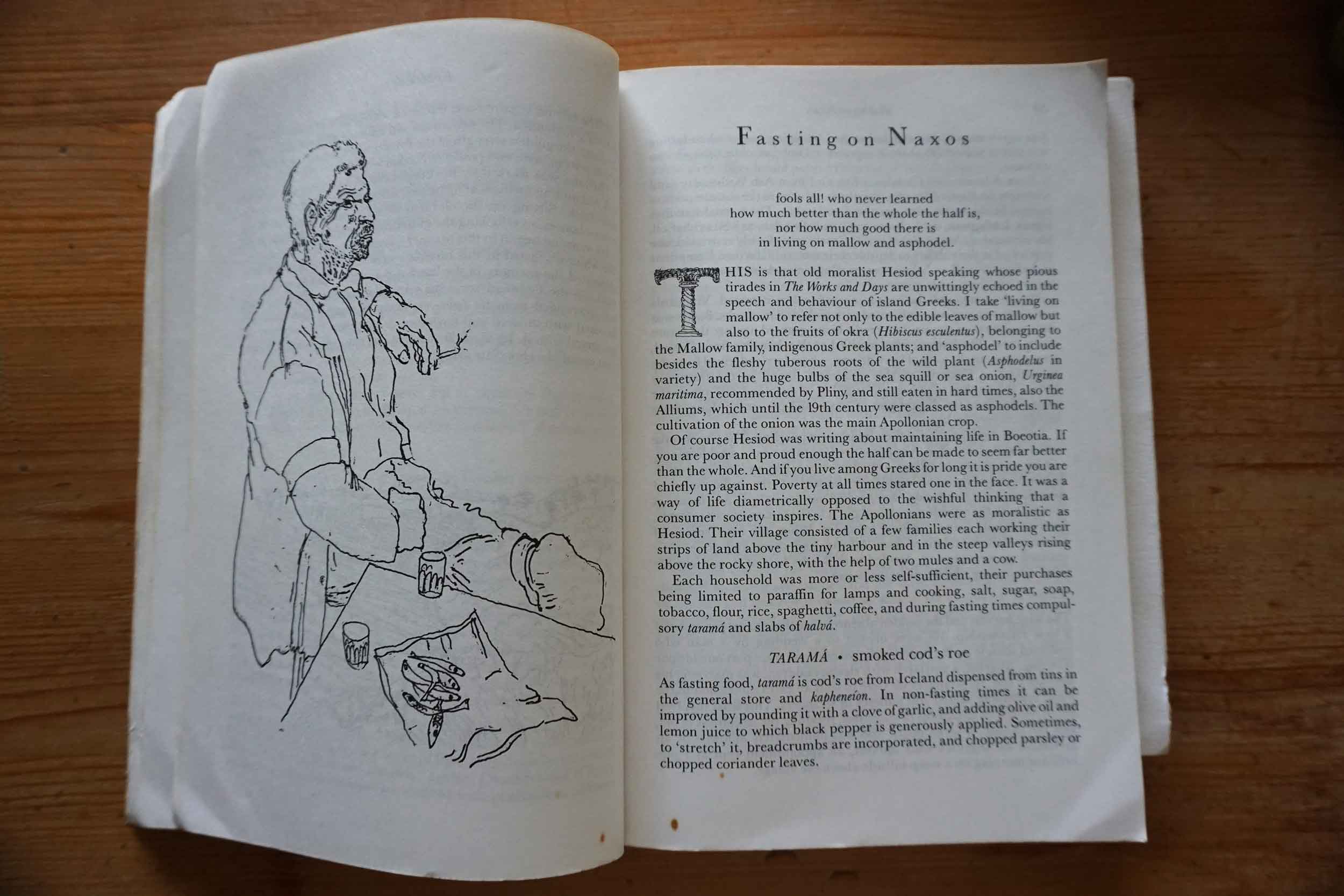 Fools all! who have never learned
how much better than the whole the half is,
nor how much good there is
in living on mallow and asphodel. 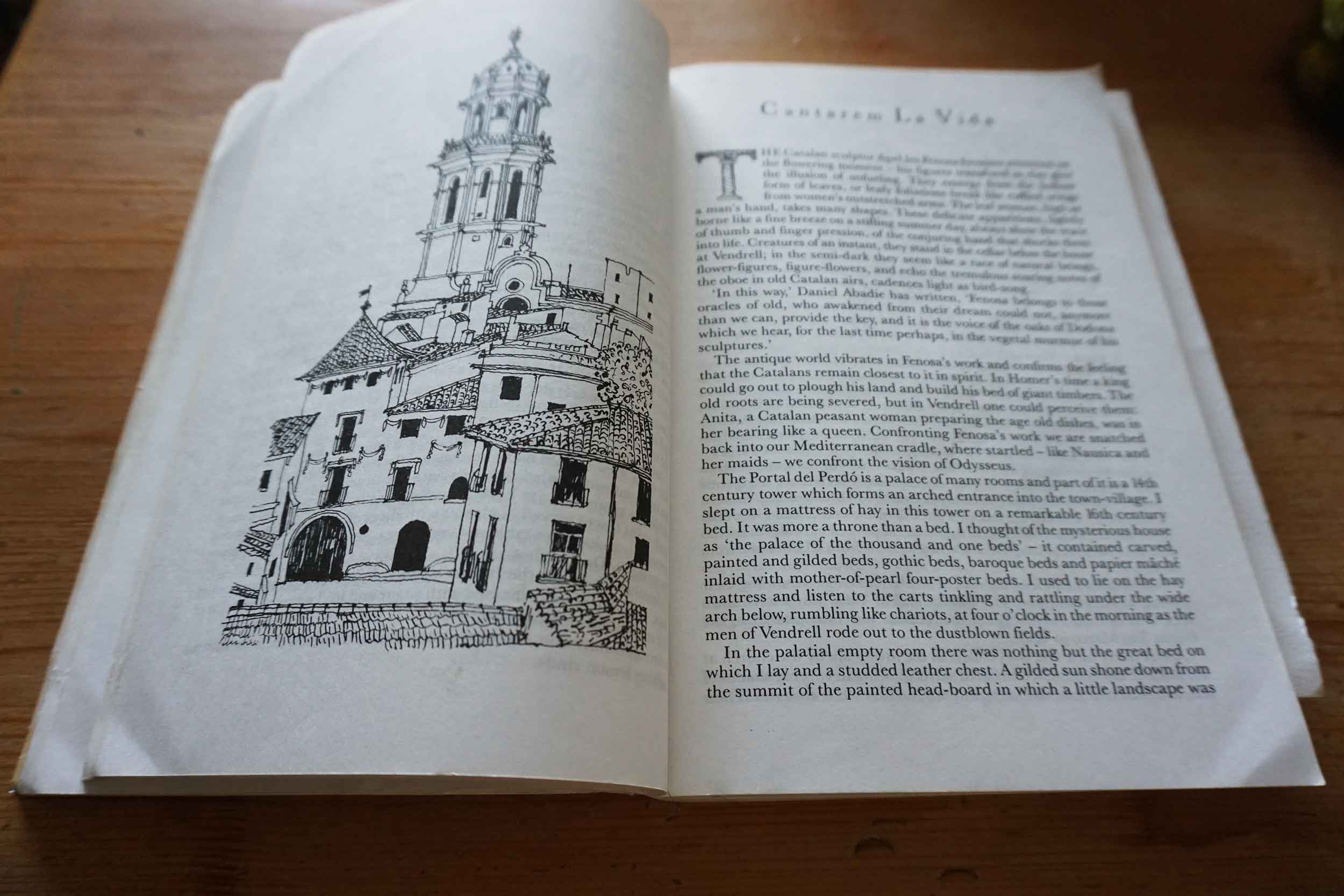 This is a book about good food, and man’s connection to it (something I’ve touched upon here). Good food doesn’t have to be elegant. It can be simple and thrifty, using few ingredients. Just as long as those ingredients are quality and in season.

Poverty rather than wealth gives the good things of life their true significance. Homemade bread rubbed with garlic and sprinkled with olive oil, shared – with a flask of wine – can be more convivial than any feast. 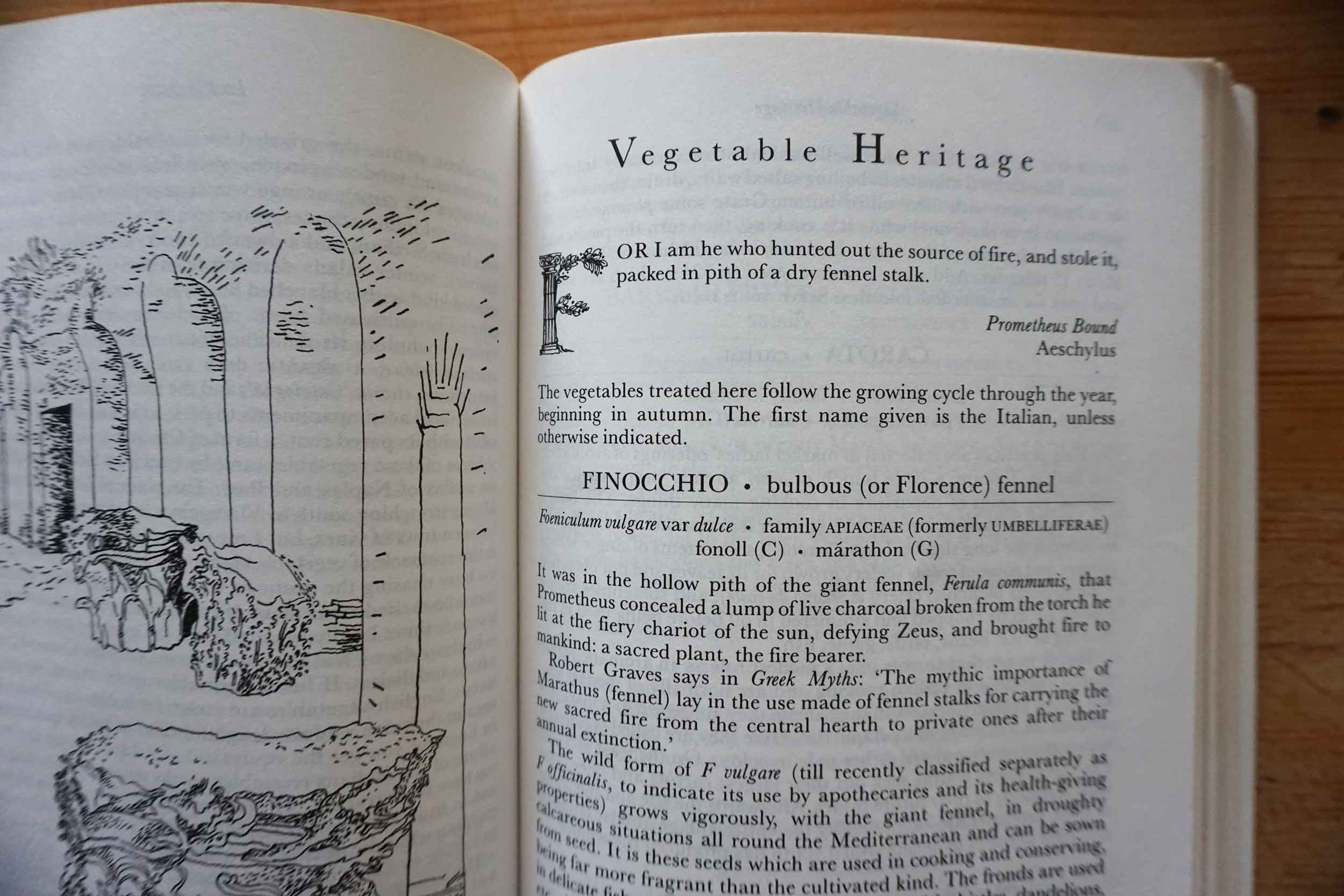 And it’s that simplicity, which brings me back to potato and eggs. The duet to which this book dedicates an entire chapter! For lunch today, I made her Greek-inspired agvá ke patátes – a cross between a Spanish tortilla and a frittata. I loved her story behind it, which, I grant, does not make it sound so appetising. It reminded me of a bar in Granada where I ended up one winter night, and was served patatas a lo pobre – poor man’s potatoes – essentially, boiled potatoes drenched in really good olive oil and sea salt. It was bloody sublime! And just goes to show how good a simple plate of spuds can be.

In remote Cycladic outposts where travellers arrive in summer, the proprietor of the kapheneion (bar) is prepared to produce, often reluctantly, a severely restricted bill of fare during these halcyon days. Its main cornerstone is agvá ke patátes, which is basically a pan of chips over which is poured at the last moment a diluted and often limited ration of raw beaten egg. But you might often meet a plate of beans, varied occasionally by boiled goat and spaghetti or, in calm weather with fried octopus, like rubber rings, or fried anchovies, and sometimes on feast days an unexpected superb fish soup.

Through a long winter during which the proprietor relinquished all culinary pretensions and limited himself to dispensing ouzo and raki like medicine and supplying mouldy bread, one was left to make what one could of a few staples and something more of eggs and potatoes, transforming the humdrum into a sumptuous dish. 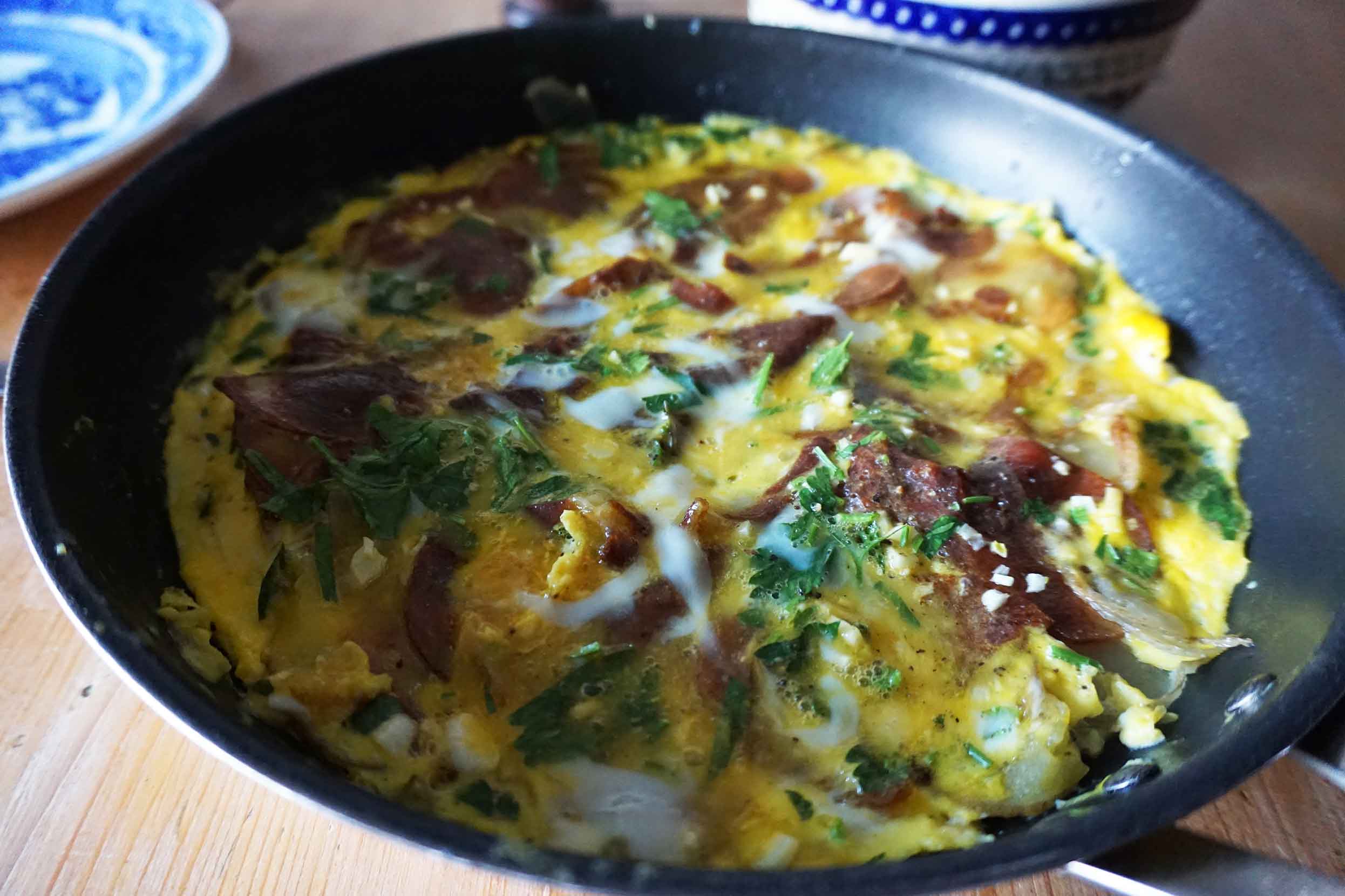 And a sumptuous dish it is. Potatoes, eggs, garlic and herbs are the basic requirement. Layered up in a pan and cooked into a carby omelette-type-thing, it is comfortingly simple. I ate it with a salad, or do as the Spanish do, and wedge it between a crusty baguette. 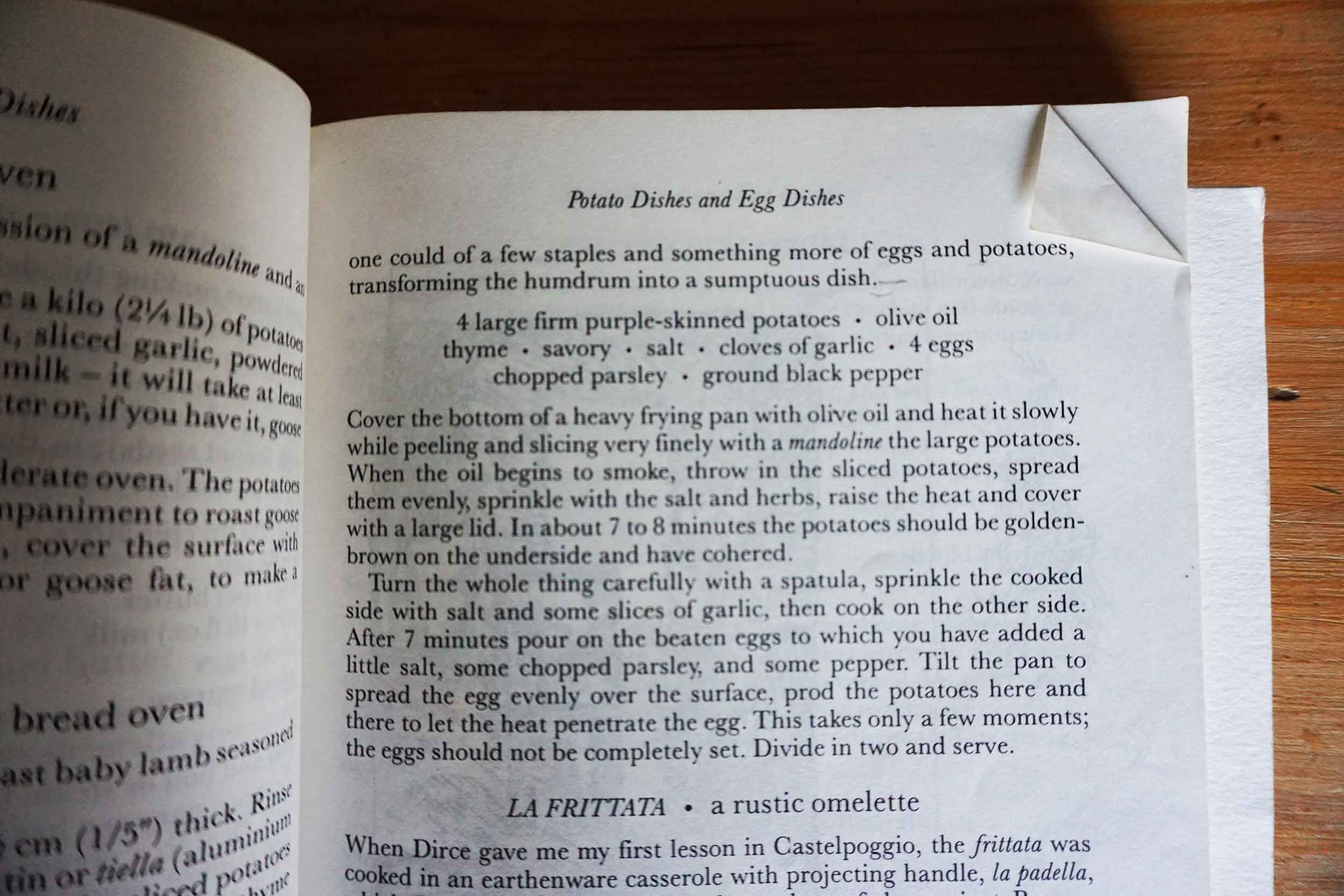 Feel free to swap out the herbs for whichever ones you have in the house/garden. Use different spuds, fry onions into it, miss out the garlic altogether… whatever you like. Just keep it simple.

Cover the bottom of a heavy frying pan with olive oil and heat it slowly while peeling and slicing very finely with a mandolin the potatoes. I’d also suggest using the slicer attachment on your food processor, if you have one. When the oil begins to smoke, throw in your potatoes, spread them evenly, sprinkle with sea salt and herbs, raise the heat and cover with a large lid. In about 7 to 8 minutes, the potatoes should be golden-brown on the underside and have cohered.

Turn the whole thing carefully with a spatula, sprinkle the cooked side with salt and some slices of garlic, then cook on the other side. After 7 minutes, pour on the beaten eggs to which you have added a little salt, chopped parsley and some black pepper.

Tilt the pan to spread the egg evenly over the surface, prod the potatoes here and there to let the heat penetrate the egg. This takes only a few moments; the eggs should not be completely set. Divide in two and serve.