I’ve been meaning to give Nora a proper intro for ages now so, finally, this is she. Hello Nora. Reasons given are: she’s a great cook, a firm farmhand and a good soul. She also has a toothless smile, a grip to cripple you and the ability to make kubdari (Georgian flatbreads stuffed with spiced beef or kid meat) with her eyes closed. Nora lives with her sister and nephews in Svaneti, Georgia. I’ve spoken about this magical place, hidden high up in the Caucasus, here. Nora is in her sixties, hunched from years of hard work, but she still chops her own firewood, milks the cows everyday, makes her own cheese, harvests her own vegetables and will gut a pig without thinking twice (read more on that here).

There was a time when Nora lived in Sokhumi, the capital of Abkhazia (a region to the west of Georgia), but in the early nineties, war and violence forced her to leave. Like thousands of Georgians, Nora left everything behind. Overnight neighbours became enemies as Abkhazia fought for independence from Georgia. Nora left her home for Svaneti, just on the other side of the border, and there she and her family have settled. It was not a happy time.

Sidenote: Tangerines is a brilliant film that gives some idea of the politics behind it. Many Georgians blame Russian influence. It’s never as simple as that of course. 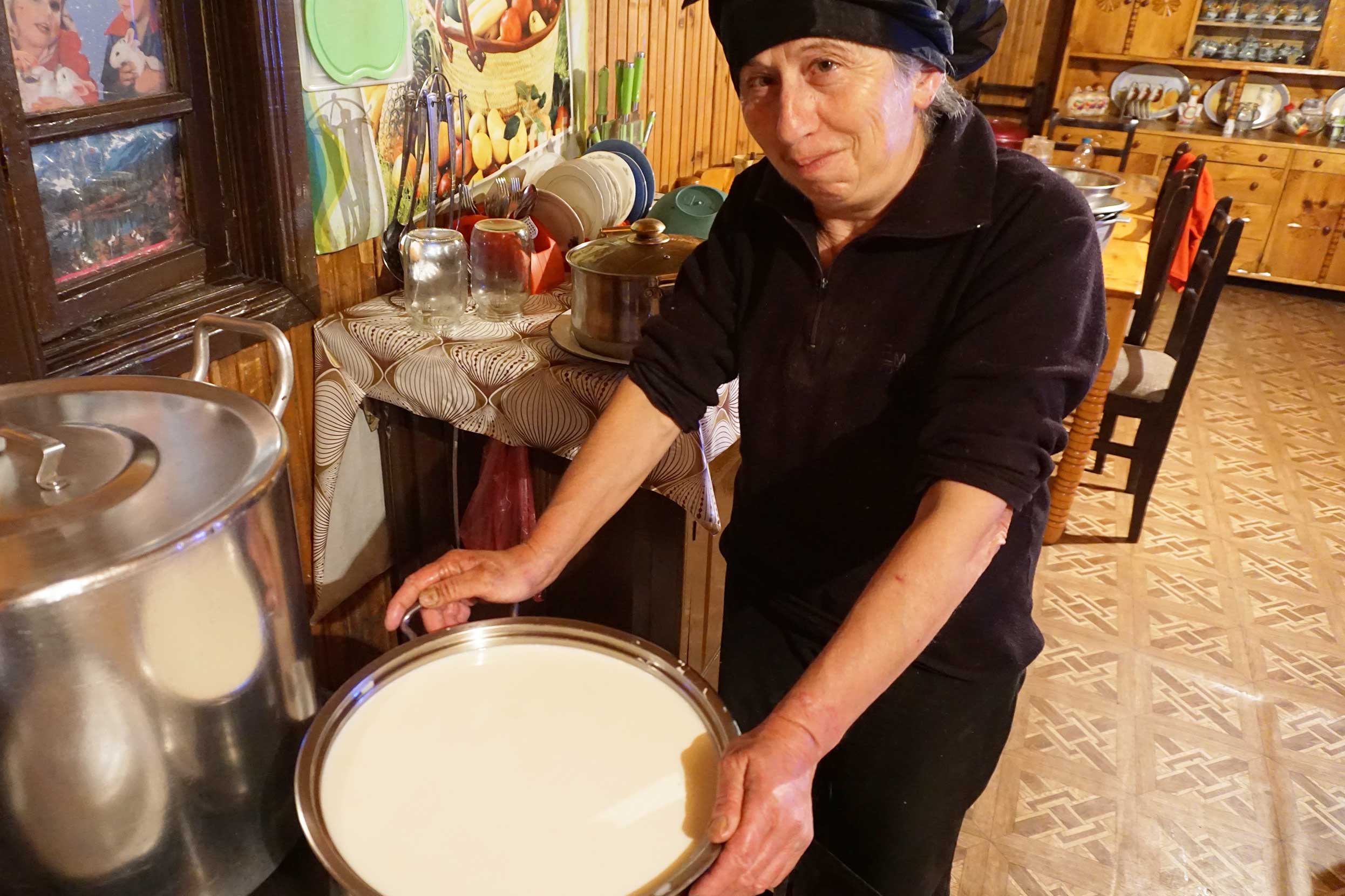 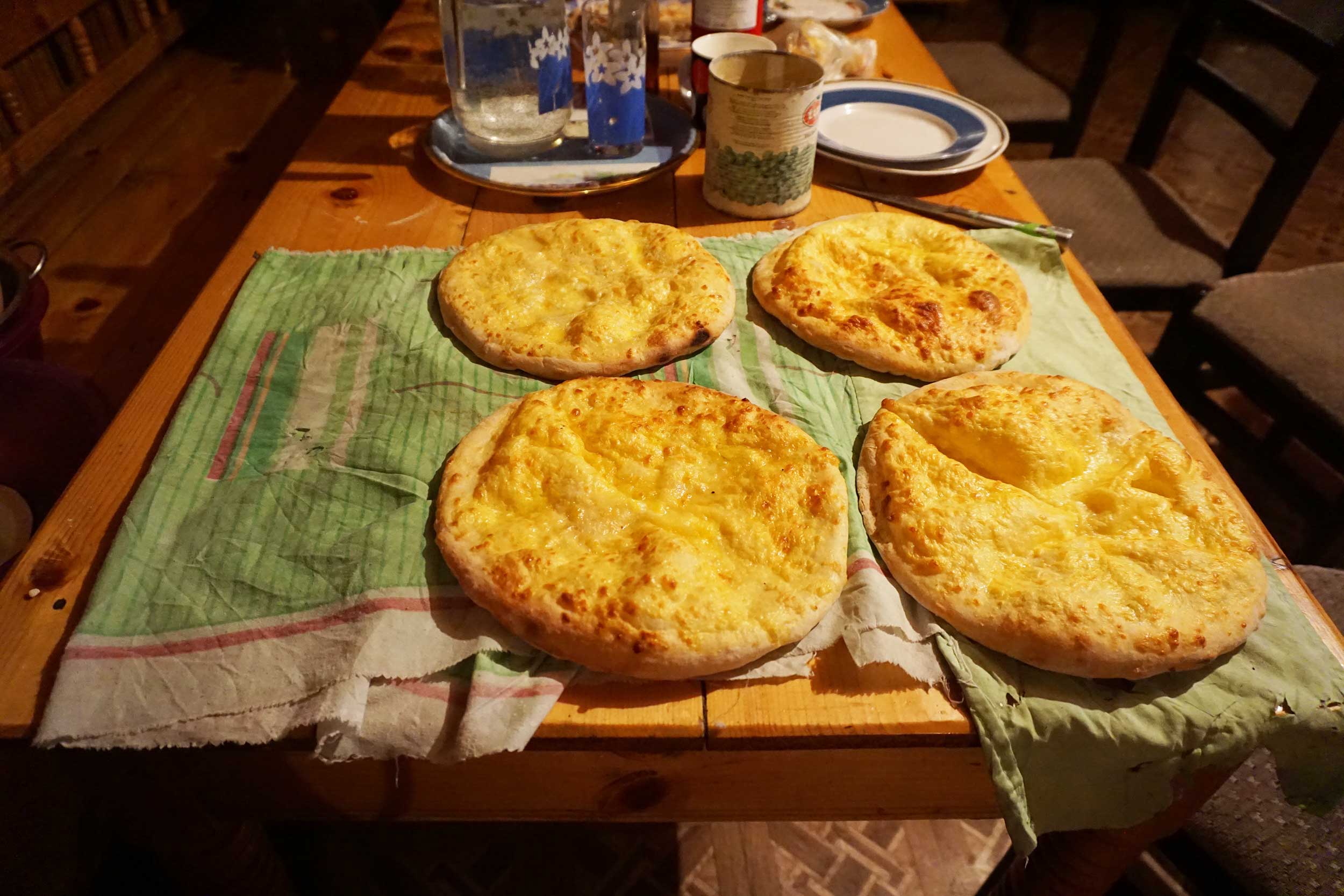 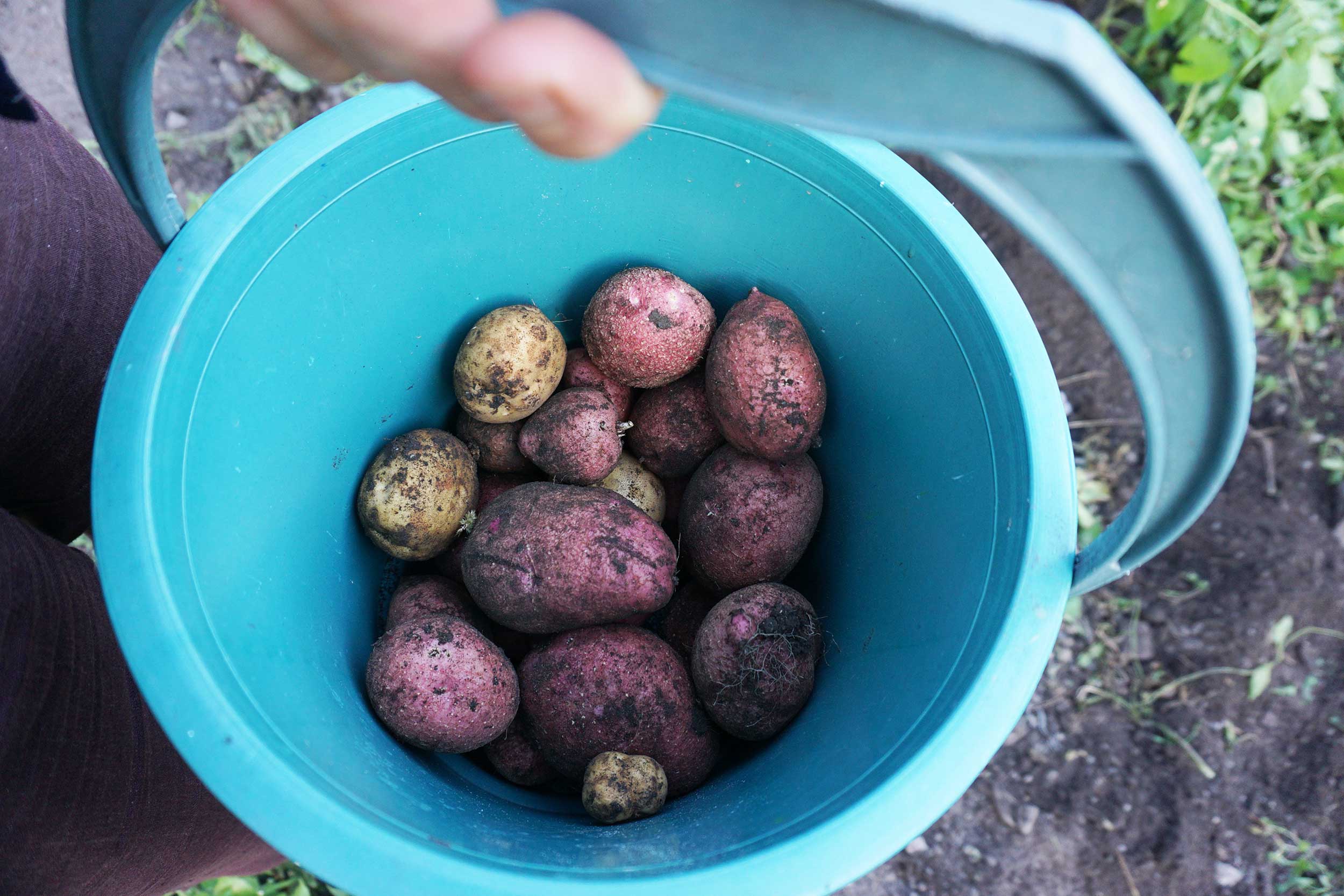 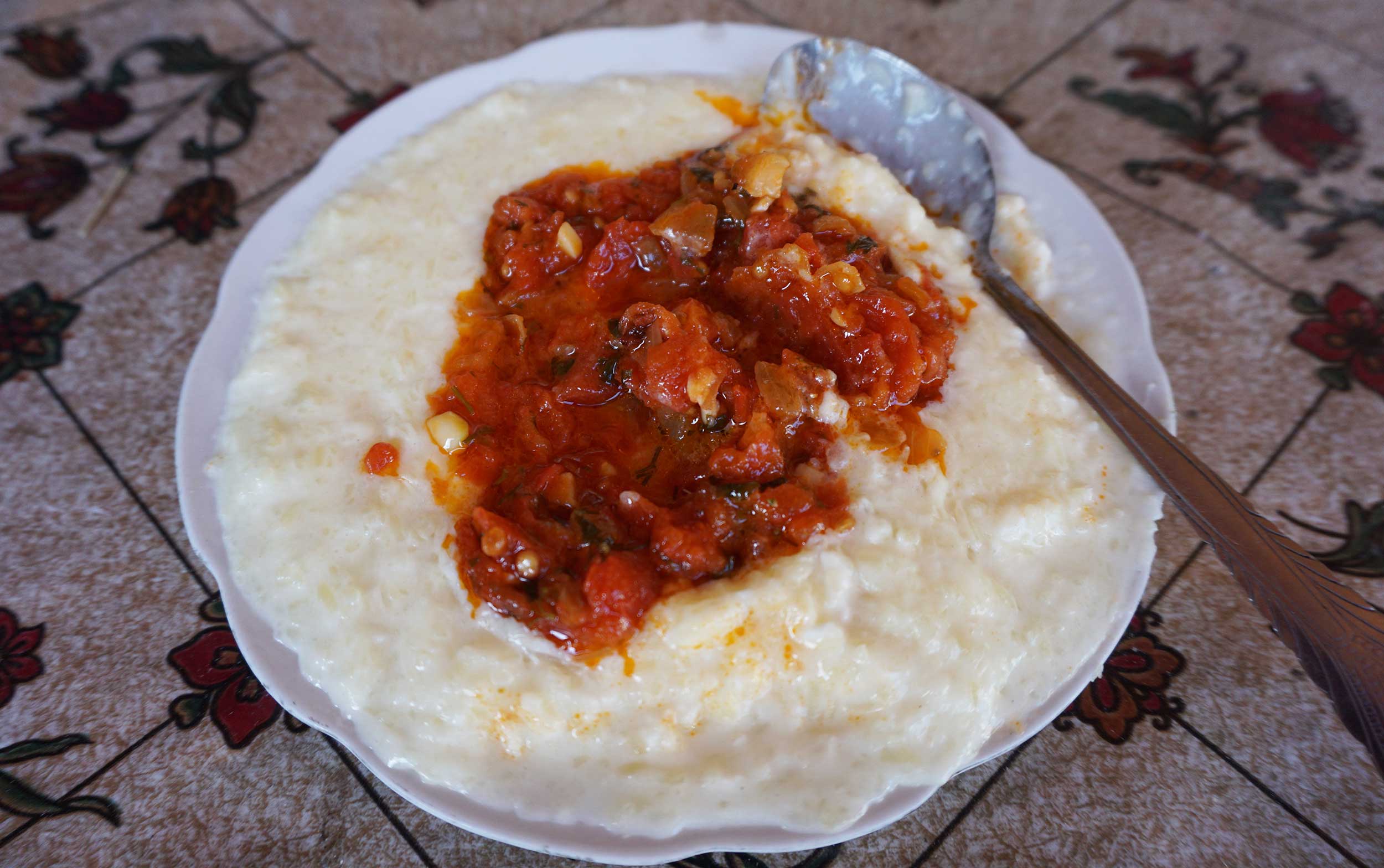 In the time I spent at Nora’s home, I loved watching her prepare food. Effortless from years of practise, she’d spin out a dozen lavashi – Georgian bread – at midnight. Her super-smooth cheesy potato purée would come with a garlicky, herby, spicy tomato stew (the best thing I’ve eaten in Georgia so far). The next day the same stew would appear with boiled potatoes, freshly harvested from the garden, a plate of her fresh cheese and her own brand of Svaneti salt – a beautiful mix of Black Sea salt with ground fenugreek, coriander, garlic, onion, chilli and a few other spices I couldn’t decipher – sprinkled on top.

Then there was her kubdari; crusty flatbread stuffed with a delicious filling of Georgian-style spiced beef. It is as rich and as comforting as a Cornish pasty. Kubdari is actually specific to this northern region. Much as local dialect and traditions have their own quirks up here (like pouring liqueur on the floor to appease the mountain spirits, which Nora often did), so too does the cuisine. 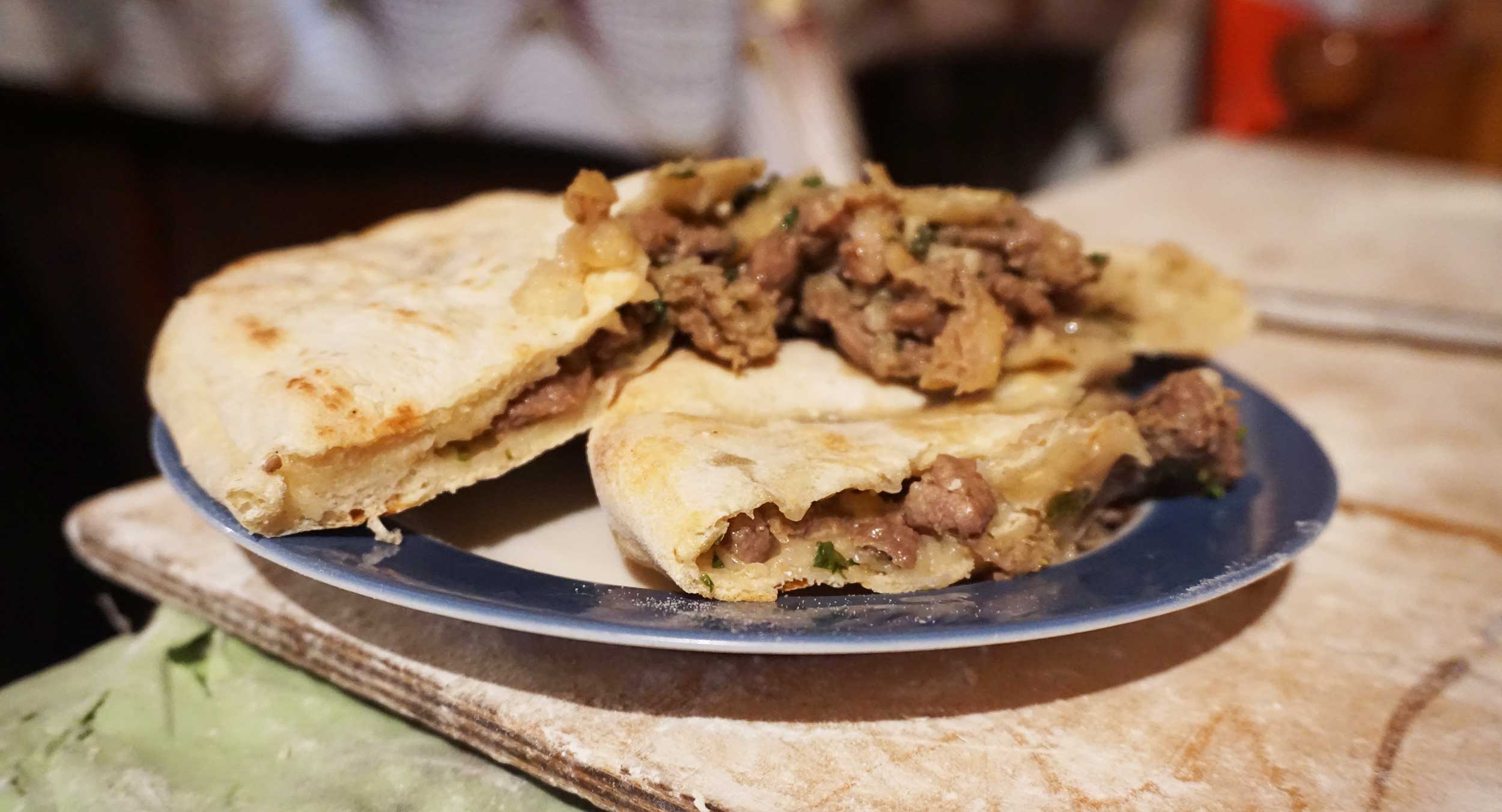 Meat is not often eaten (it’s expensive to kill a cow!) so kubdari is made only occasionally. If making this at home, do as the Georgians do, and use only quality, well-sourced beef or goat meat. If you can’t find that, swap the meat for cheese for the classic Georgian khachapuri. It’s just as good, but more on that later.

First, Nora dices the beef and onion, then finely slices the garlic and fresh coriander. Chopping the beef is important for a better texture, so don’t use minced beef as an easier alternative. She brings out her ground coriander and fenugreek, which she has dried, ground and stored in a stack of old coffee jars. She sprinkles this liberally on top, followed by ground cumin, salt and pepper. Scrunch scrunch scrunch. Shape into equal-sized balls about the size of a squash ball. 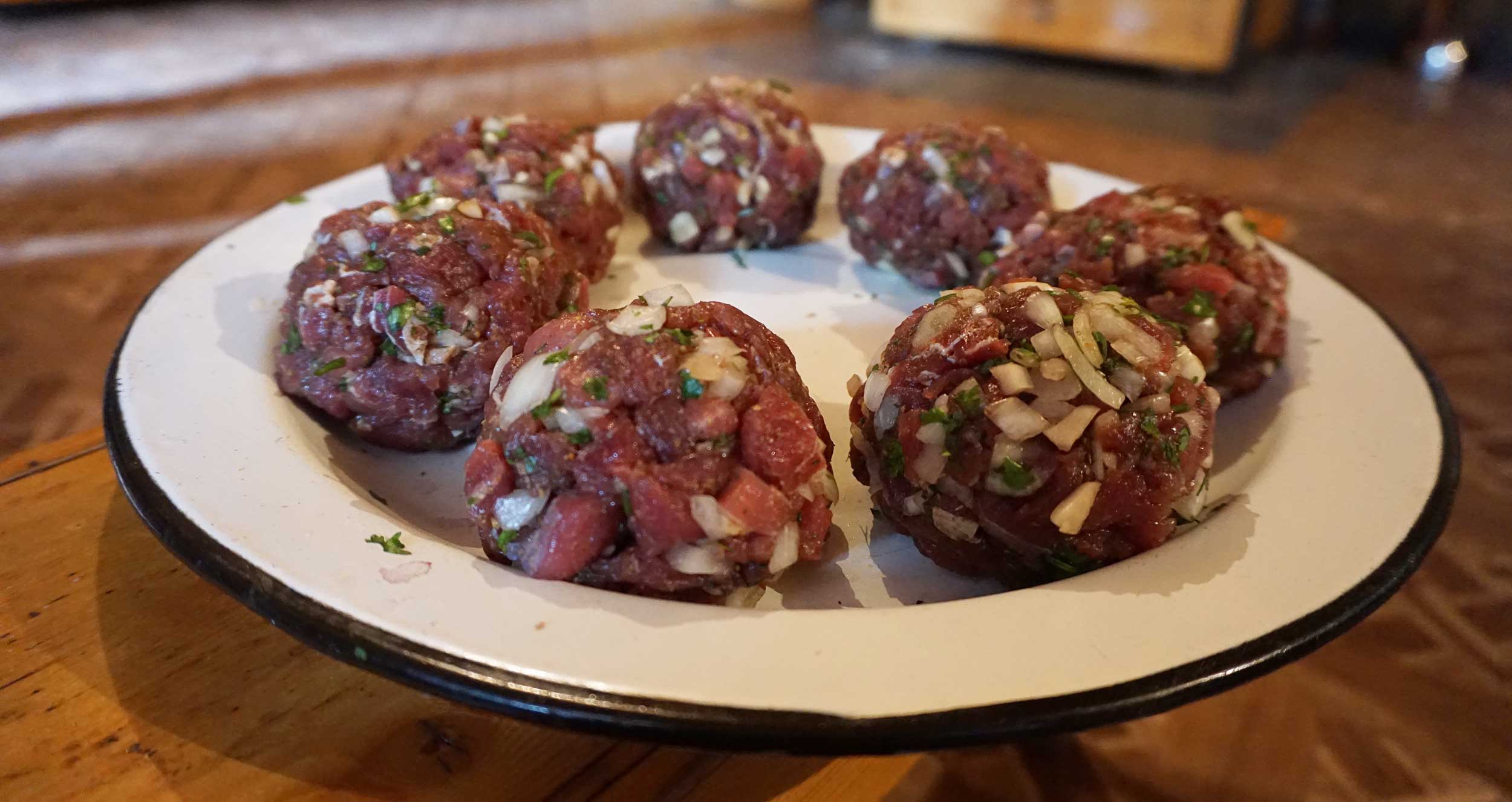 Now, the dough. Nora has an unending supply of dough, sat like a fat belly in a big covered bowl. Every other day, out it comes for her equally acclaimed khachapuri. Hot, cheesy bread, ubiquitous all over Georgia. I haven’t yet had a khachapuri that trumps hers. Nora’s khachapuri and kubdari are made with the same dough. In essence, they are very similar. The former has cheese, the latter meat. She rolls the dough into balls then pats them into thick rounds with her hands. The balls of meat go in the middle, then she pulls and bunches it up over the filling like a dumpling. 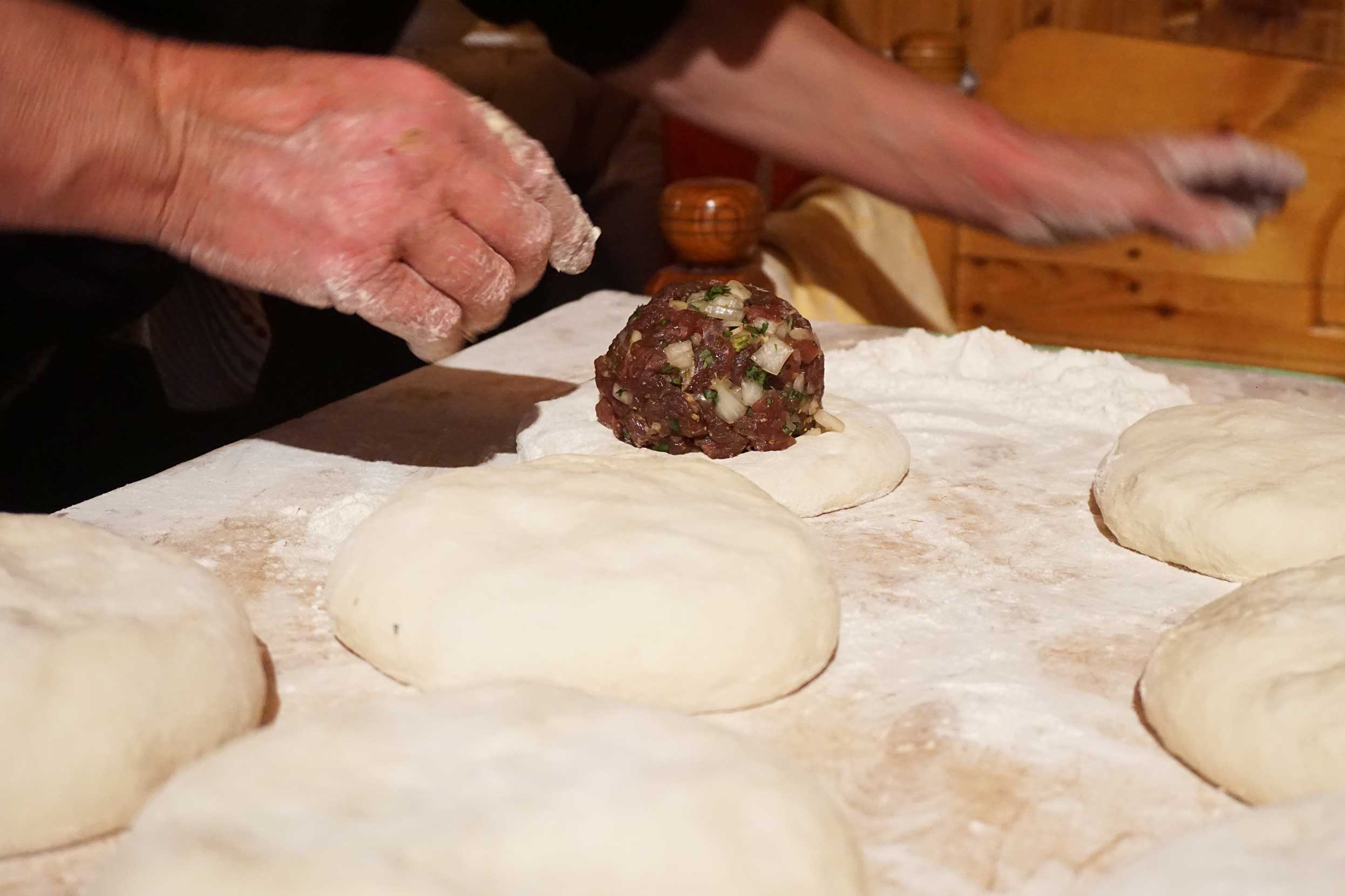 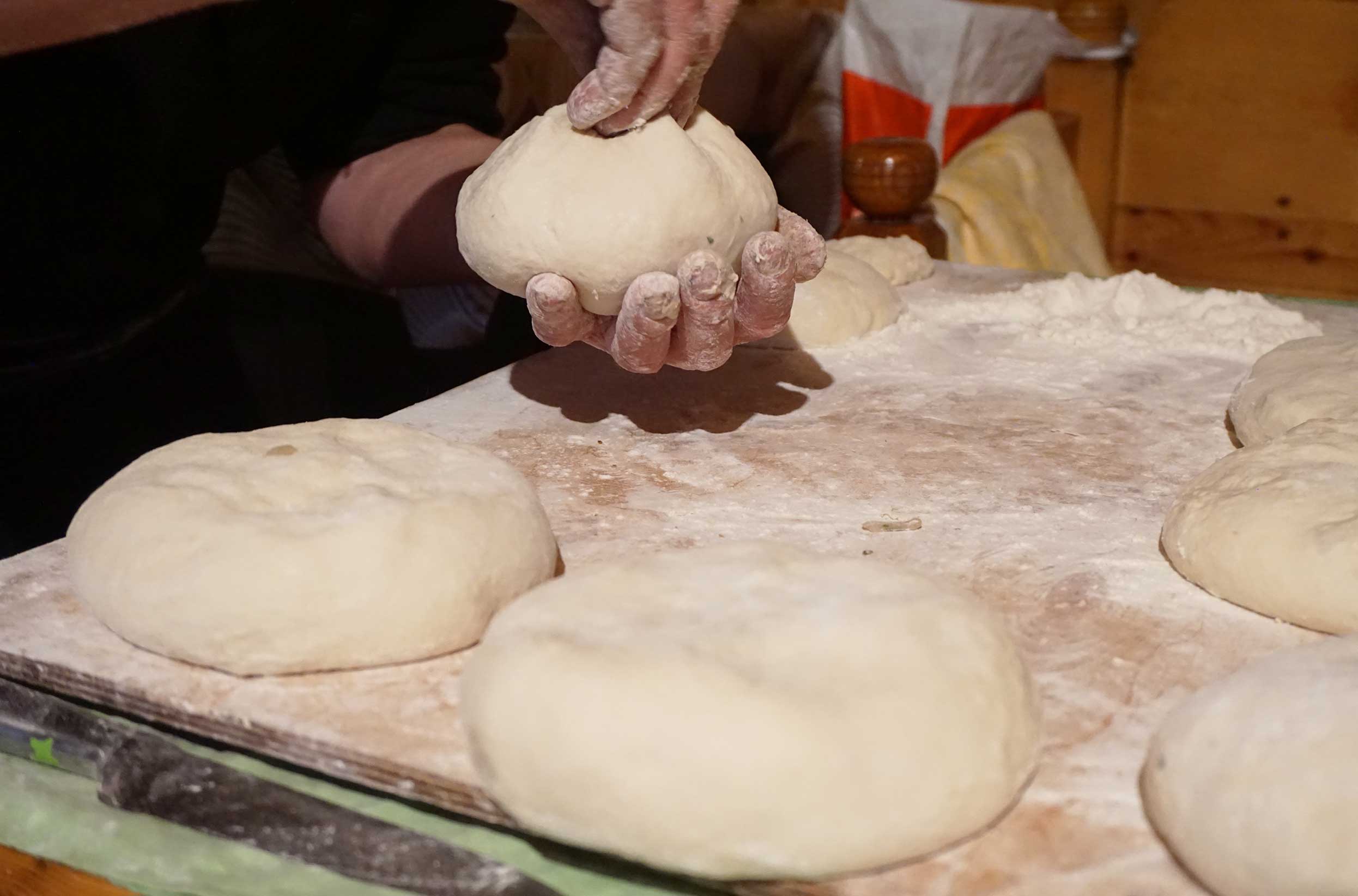 Next, she flattens it back out into a flat round, before putting it on the hot pechi (oven) until starting to turn golden. A hot dry frying pan would work for the rest of us. She gently presses it down so the bottom starts to crisp up all nice. Next it goes into the oven until cooked through. 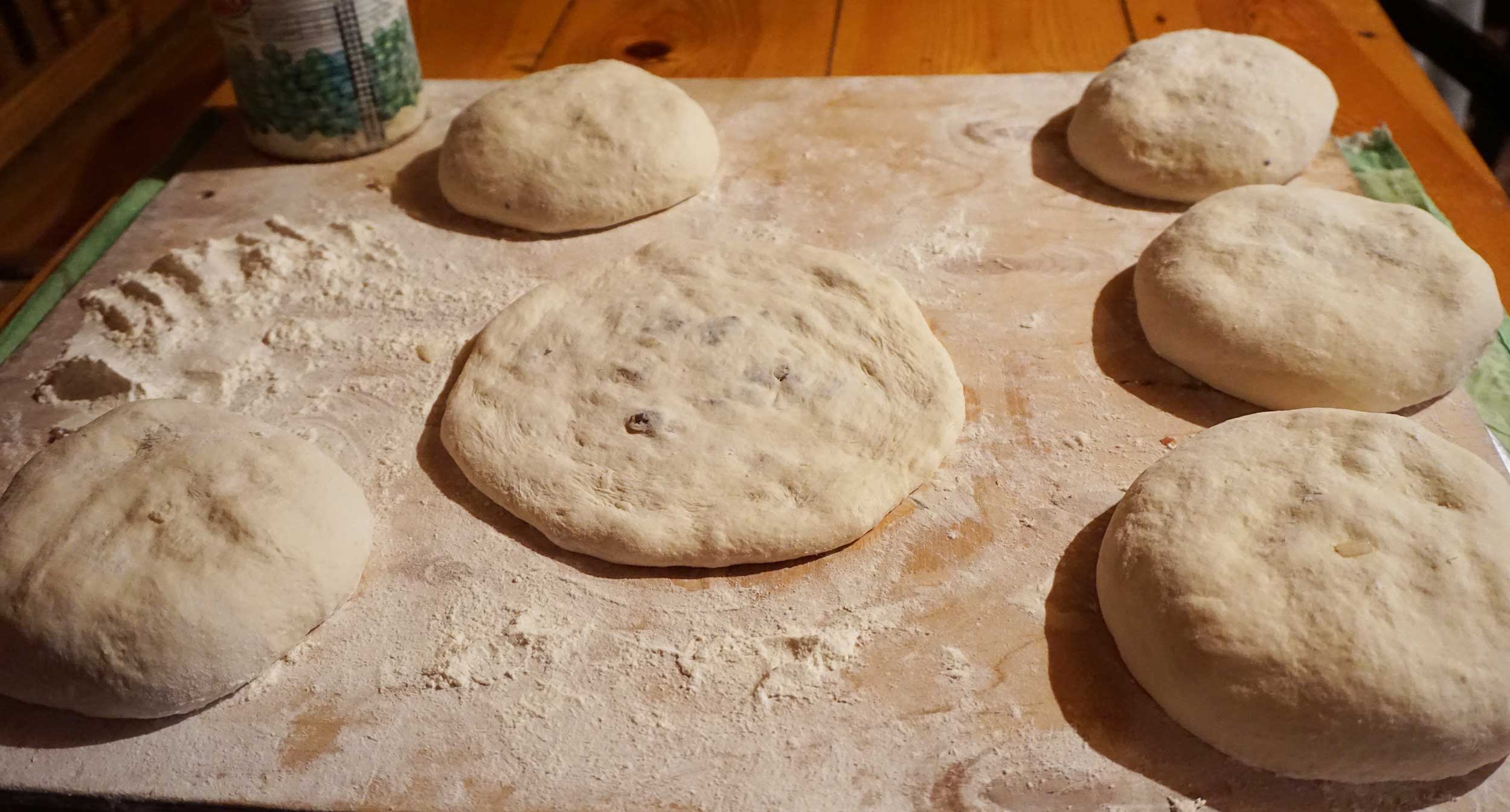 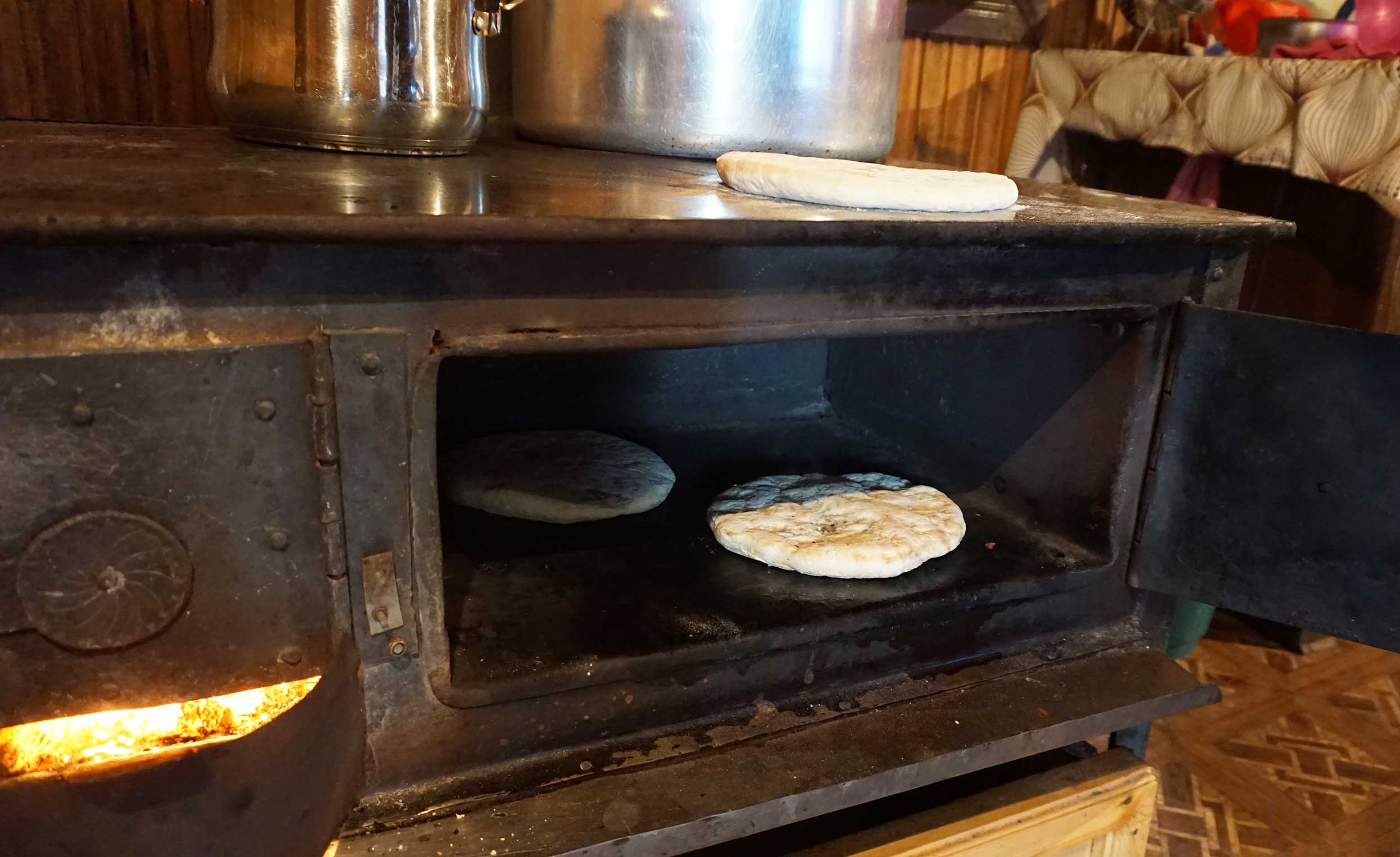 Et voila! Eat it hot just as it is or in the days to follow with the usual tableful of fresh tomatoes and sliced fresh cheese. Take me back…

To make the dough, add 400ml of lukewarm water to a bowl and stir in the yeast. In another bowl, place the flour and sugar (for an extra golden crust), then make a well in the middle. Add the yeast mixture to the well, then mix until a soft dough forms. Cover and leave to prove for 2 hours.

Meanwhile, dice the beef into small pieces, peel and dice the onion, then peel and finely slice the garlic. Finely chop the coriander (including the tender stalks). Add to a bowl with the ground coriander, fenugreek, cumin and a teaspoon each of sea salt and black pepper. Scrunch well until mixed and combined. Divide into four portions and roll into balls. Set aside.

Knock out the dough, then knead well until smooth and elastic, dusting with flour as you go. Divide and roll the dough into four equal balls, then pat them out into thick rounds.

Place a meat ball onto each round, then pull the dough up and over the filling, as if making a dumpling. Pinch the edges together to seal. Return it to the flour-dusted surface with the sealed edges underneath, then gently pat it out into a flat, thin round.

Heat a large frying pan over a medium-high heat. Add the dough rounds, one-by-one, and cook until turning golden underneath, pressing each one down gently so the whole surface area touches the pan. Place on a baking tray and put into the hot oven until golden and cooked through. Serve hot or cold.

Till next time…
If you’ve had your fill of kubdari, freeze the leftovers for another day. The dough itself freezes well too. Save any leftover filling by frying it up with a little oil, and serve with rice.