The first time I had ajvar (pronounced ayvar) it was dolloped on a plastic plate with a hunk of cold pork and white bread. I was in a Slovenian village at the local men’s club – essentially a community centre with a bar in it – where every Friday the village men came to play boules, drink Lasko beer and eat meat. The spicy red pepper relish came in a big jar, plonked unceremoniously on the bar. I watched everyone else before I tucked in, dunking their grilled steaks into the orangey red sauce and swallowing it down with a slug of beer. Then the folk songs began, hard apple liqueur followed and the ajvar was forgotten.

I found ajvar again in Bosnia and Herzegovina. Served with everything. Spicier, thicker, redder, ajvar (along with most of Bosnia’s Balkan neighbours) is the national condiment. I ate it with roast chicken, with their doughy bread fritters, called uštipci, stirred into cornmeal porridge, and even on eggy bread for breakfast. Ajvar is both dip and spread. It’s good for everything basically.

Come autumn, most Bosnian families will be making their own. It’s harvest time for red peppers so preserving large quantities of ajvar for the winter months ahead is a must (shop-bought ajvar just doesn’t compare). Go to any rural family in this time and I’m sure you’ll find them slaving over the same big vats of steaming red liquid, stirring continuously and methodically with long wooden spatulas (for three hours!). In Bosnian terms, making ajvar requires dedication and time. 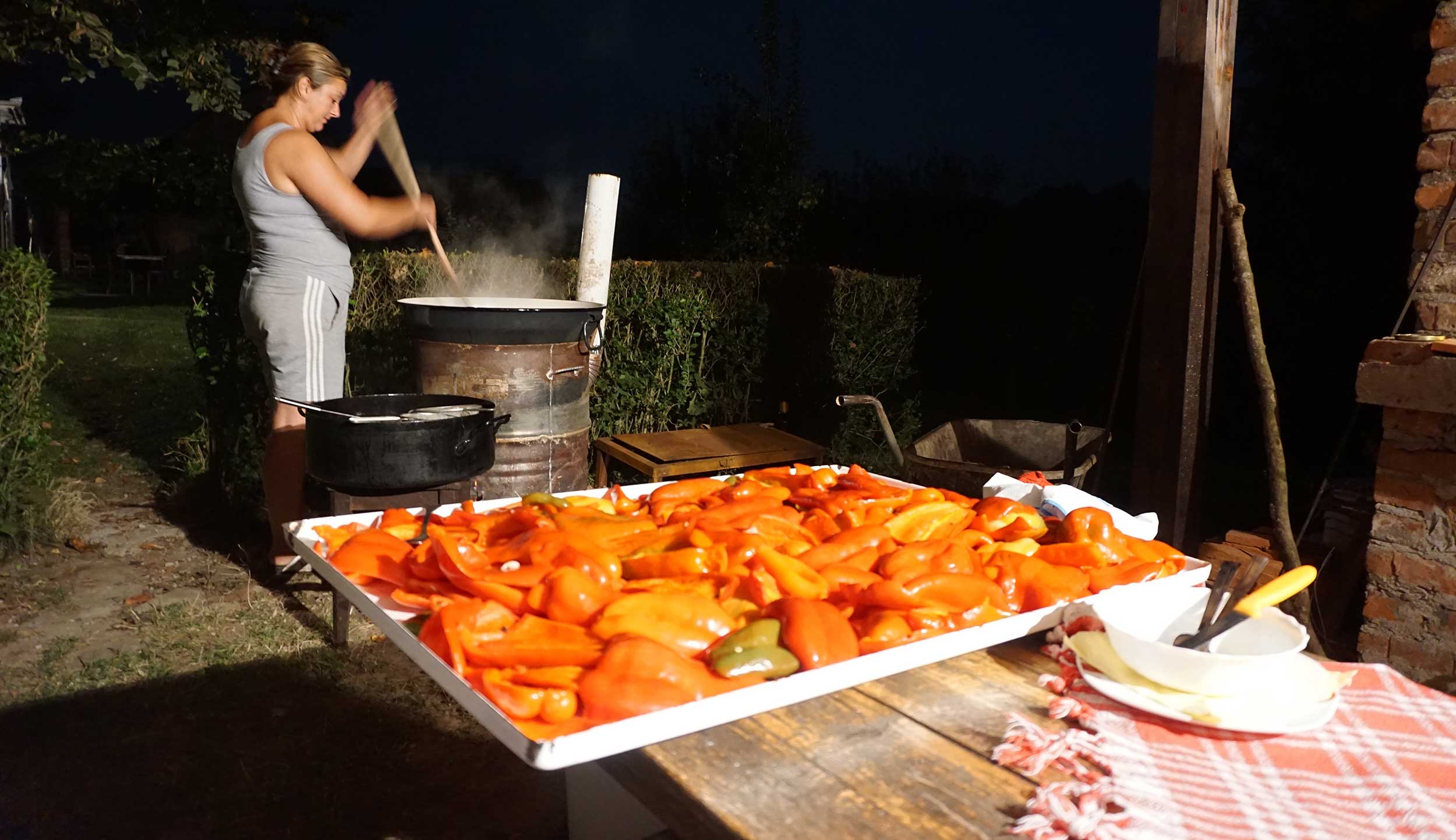 On my arrival at my guesthouse in rural northern Bosnia, my host Mira and her neighbour Marijana were busy with the preparations. It was about 10pm and large trays of cooked peppers sat on the table while kilos more were boiling in a huge pot. The pot was in a large steel can with a makeshift fire beneath it – industrial-style equipment is needed for ajvar preservation!

The peppers are boiled in water with onions, garlic, vinegar, salt and peppercorns. If you have the time and inclination, you can grill the peppers instead, then steam them in a covered bowl before removing the skins. Boiling them is quicker and in Mira’s opinion, the difference is marginal. Up to you! The peppers are then left to cool. That evening, we sat eating an incredible dinner of spit-roast chicken and last year’s ajvar with the smell of sweet peppers wafting towards us.

Once cooled, grind them. Mira has an electric grinder, but a food processor would be fine too. It’s at this point you can add aubergines (roast them and peel them first). Some like them, some don’t, but either way they should account for no more than 10% of the final result. The cooked onions and garlic go into the mix too.

Now for the final stages: heat about 2cm of oil in a large pot until smoking hot. Add the blitzed pepper mixture (it will spit so be careful!), then cook until thickened and reduced for about 3 hours. It’s really important to stir the whole time so it doesn’t stick to the bottom. 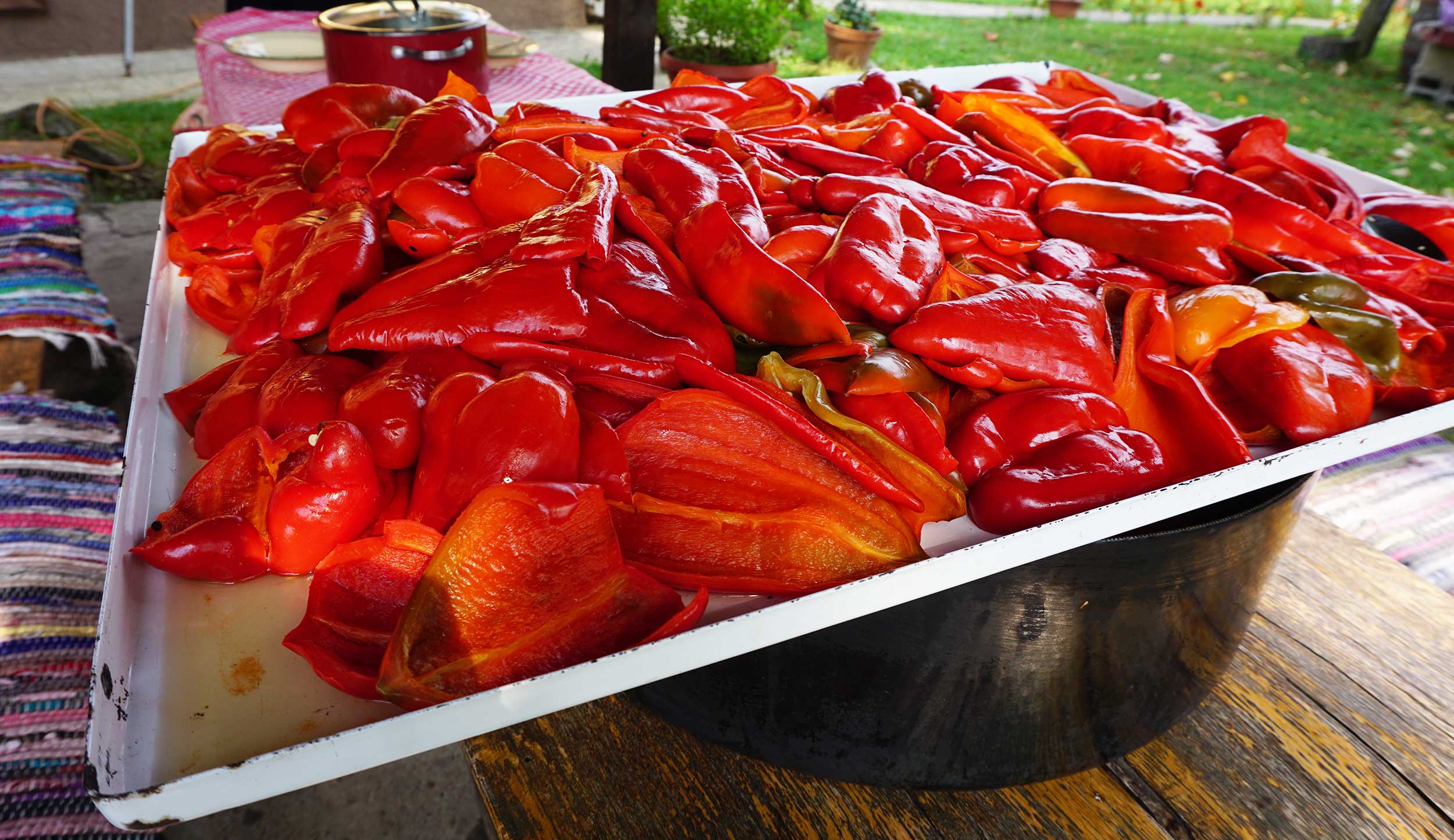 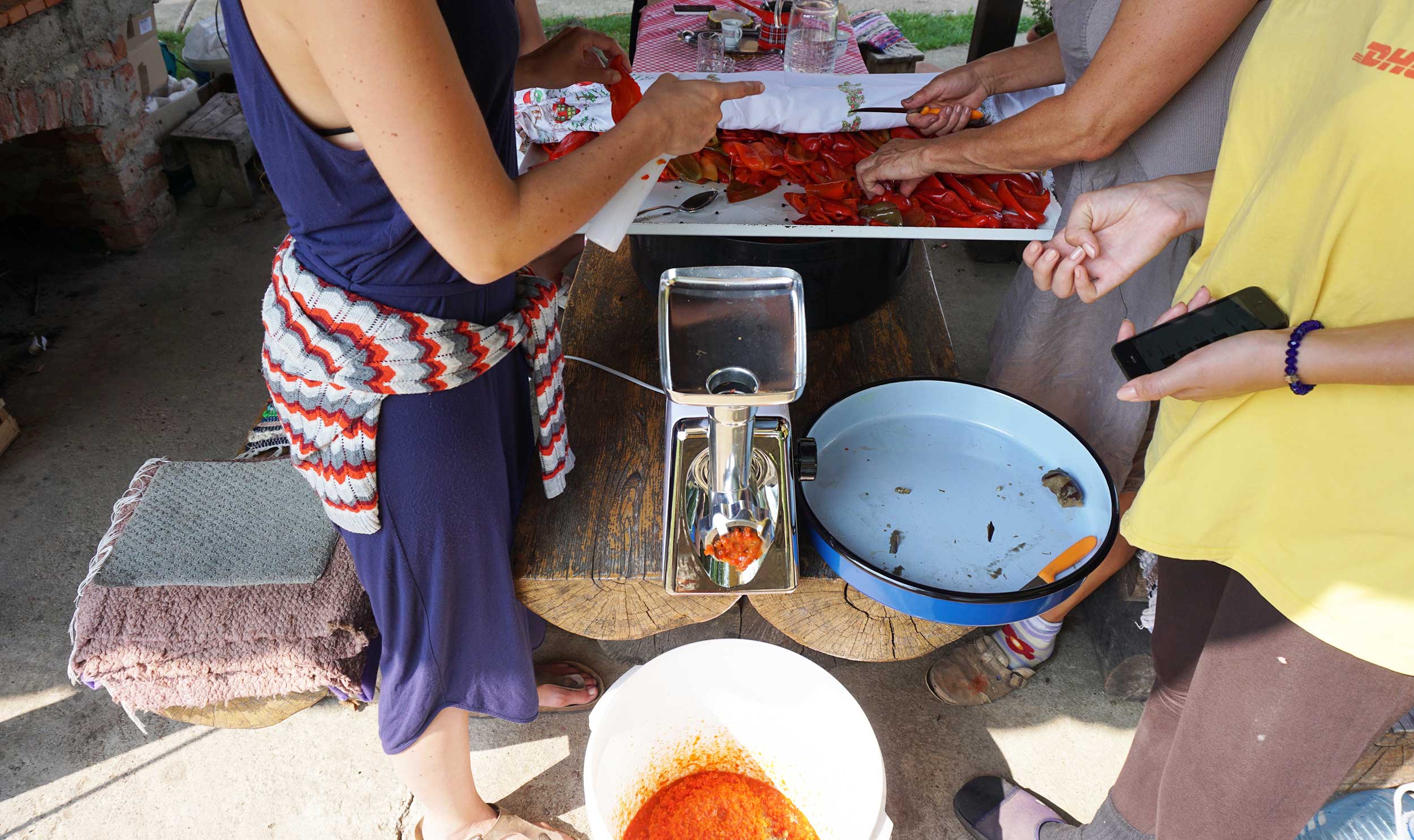 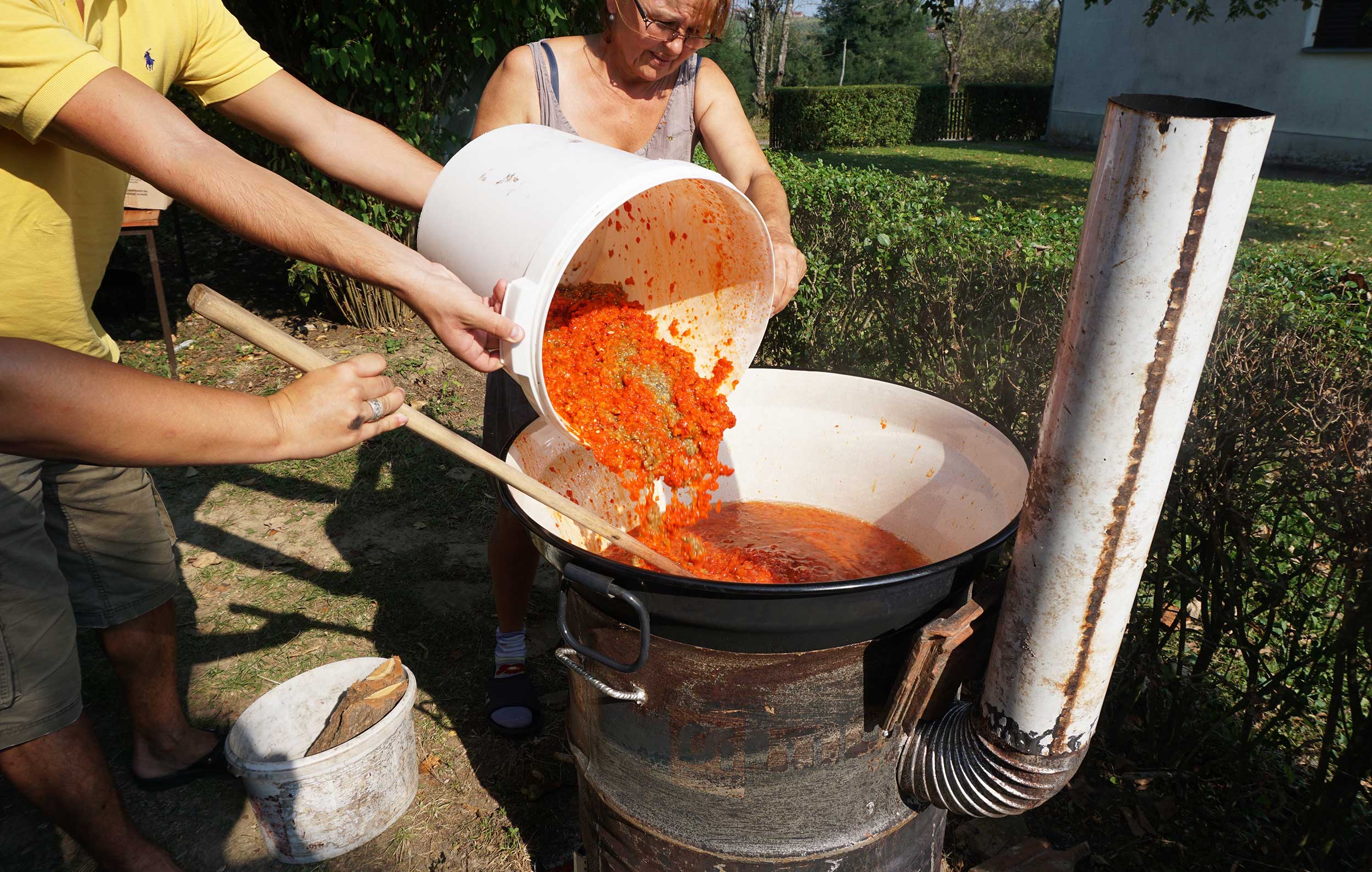 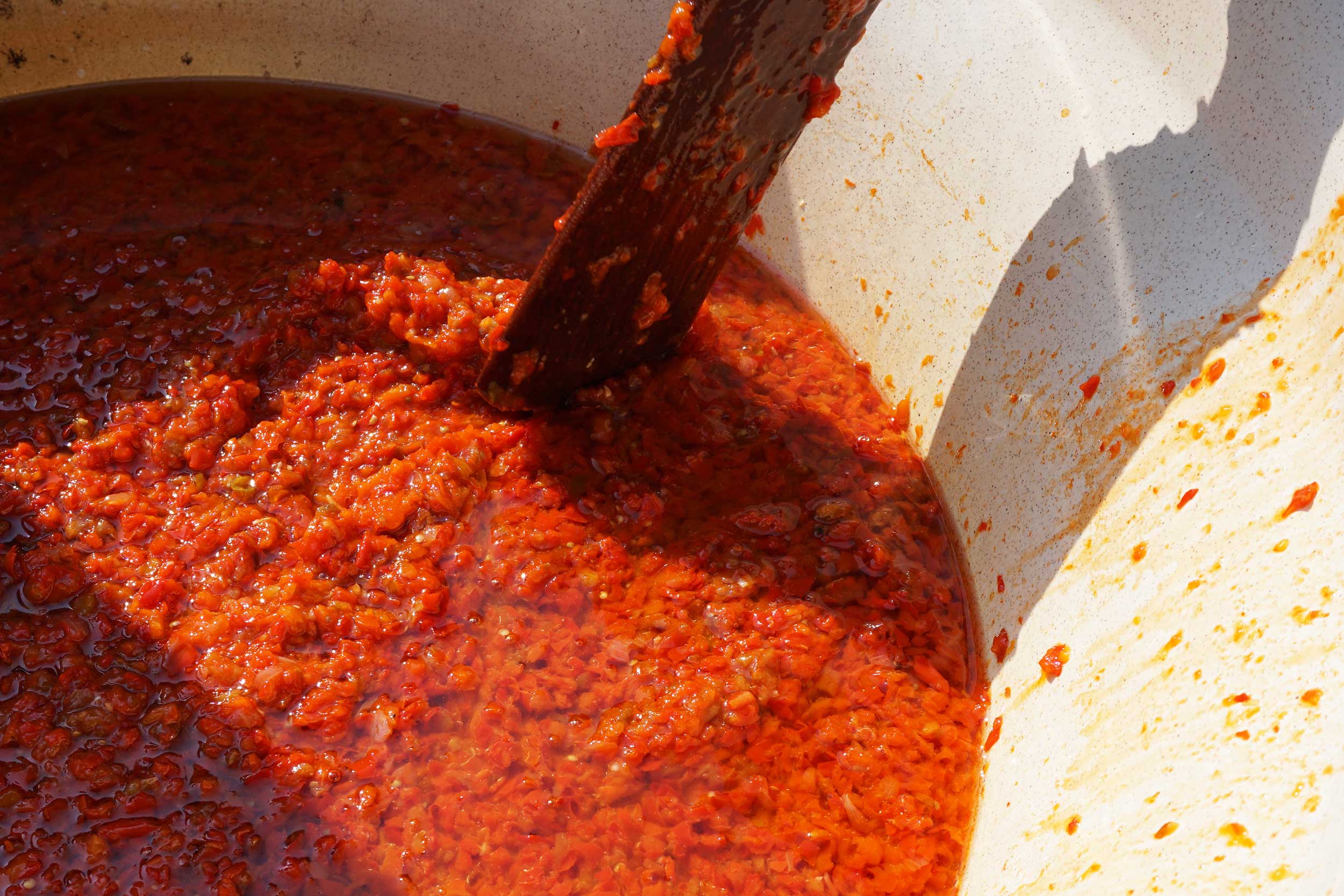 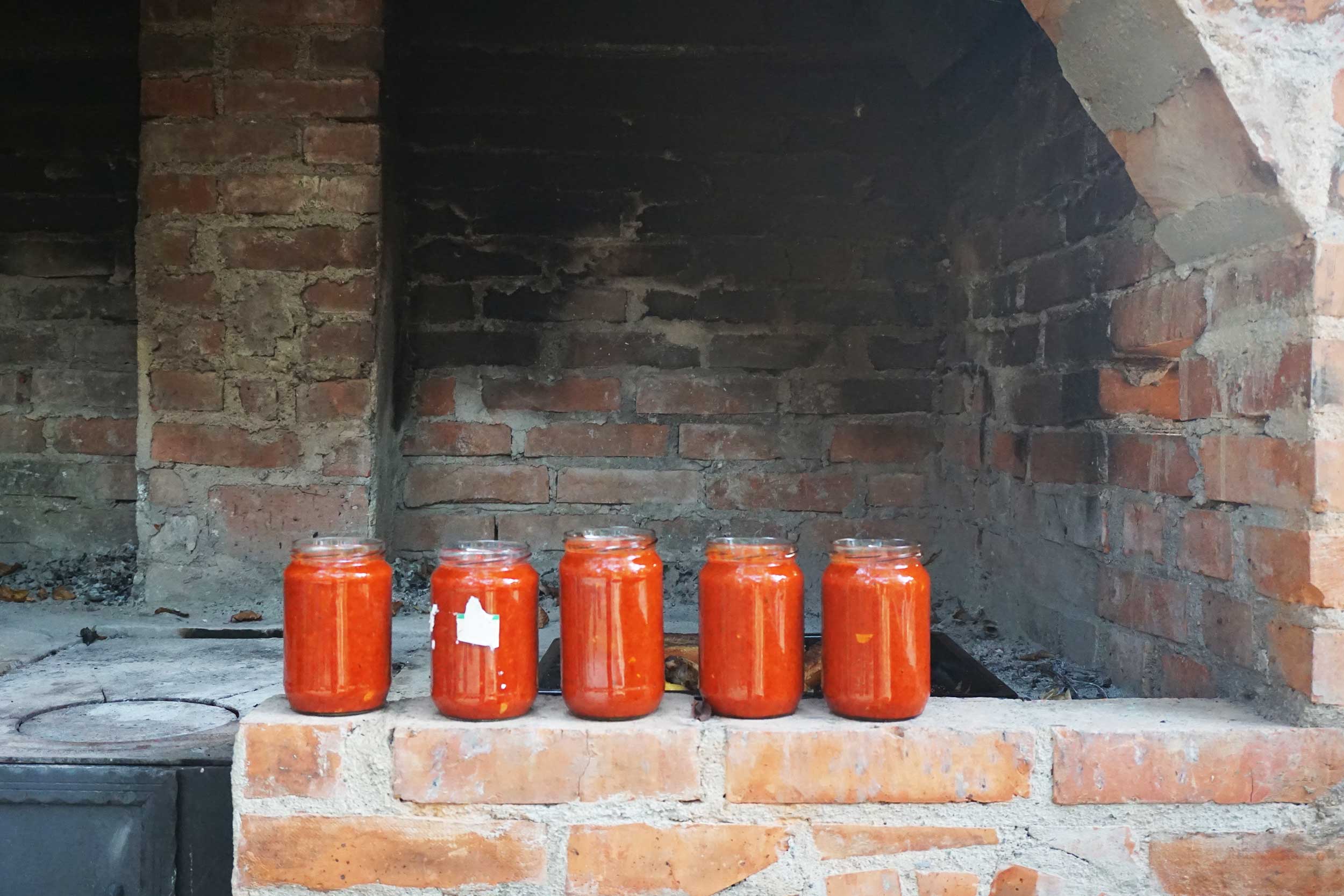 While it’s cooking, taste it. This is the crucial bit and what calls for endless discussion among the cooks, neighbours, friends, and whoever happens to be about. More garlic? Salt? Pepper? Chilli? Everyone will weigh in with their opinions, garlic will be chopped, more salt added, more tasting, more adjustments.

And finally, when all that’s done. Add to sterilised jars, secure and store. Phew!

Mira gave me her recipe using 10kg of peppers (!), which I’ve scaled down for the more modest ajvar-eaters among us. It’s the same method but without the industrial-scale equipment that is most often used here. Depending on what you like, use hot red peppers, add more or less garlic or skip the aubergine altogether if you like. This is a rough guide so adjust to what you prefer.

If using aubergines, roast them whole in a hot oven for about 1 hour, or until tender. Leave to cool.

Fill a large pot with water. For every 1.5 litres of water, add 3 teaspoons each of sugar, salt and peppercorns, and a good swig of vinegar. Bring to the boil.

Halve and deseed the peppers, then peel the onions and garlic. Add the veg to the boiling water in batches, and cook for a couple of minutes until tender. Using a slotted spoon or tongs, remove to a tray and leave to cool. Once cooled, peel the aubergines, then place into a food processor with the red peppers, onions, garlic and some of the peppercorns, depending on how peppery you want it. Blitz well.

Heat 2cm of oil in a large pot until smoking hot. Add the red pepper mixture (it will spit so be careful) and stir well. Cook for 1 hour, or until thickened and reduced, stirring often. Taste it as you go, adding more chopped garlic, fresh chilli, salt or pepper as you like.

Divide the hot ajvar between clean, sterilised jars. Secure and turn the jars upside down, cover with tea towels and leave to cool. And there you have it! Delicious ajvar all year round!