This is Vida. It occurred to me that her name means life in Spanish, which is fitting because Vida is full of it. She’s the oldest member of the Slovenian family I’ve just spent a week with, and she’s now my adopted grandmother too. Vida has lived in her house on a mountain in southern Slovenia for about 50 years (here, if you want specifics), and it’s here too that her children, grandchildren and great-grandchildren also live. All within a few kilometers of each other.

The village is Gradišica, and it’s one of several that are dotted about the mountains, each with their own white church (Catholicism is, like Italy, deeply rooted here). Hay bales dot green pastures, there are rolling valleys and pine forests, apple trees and trickling streams, wild flowers and blackberry bushes. 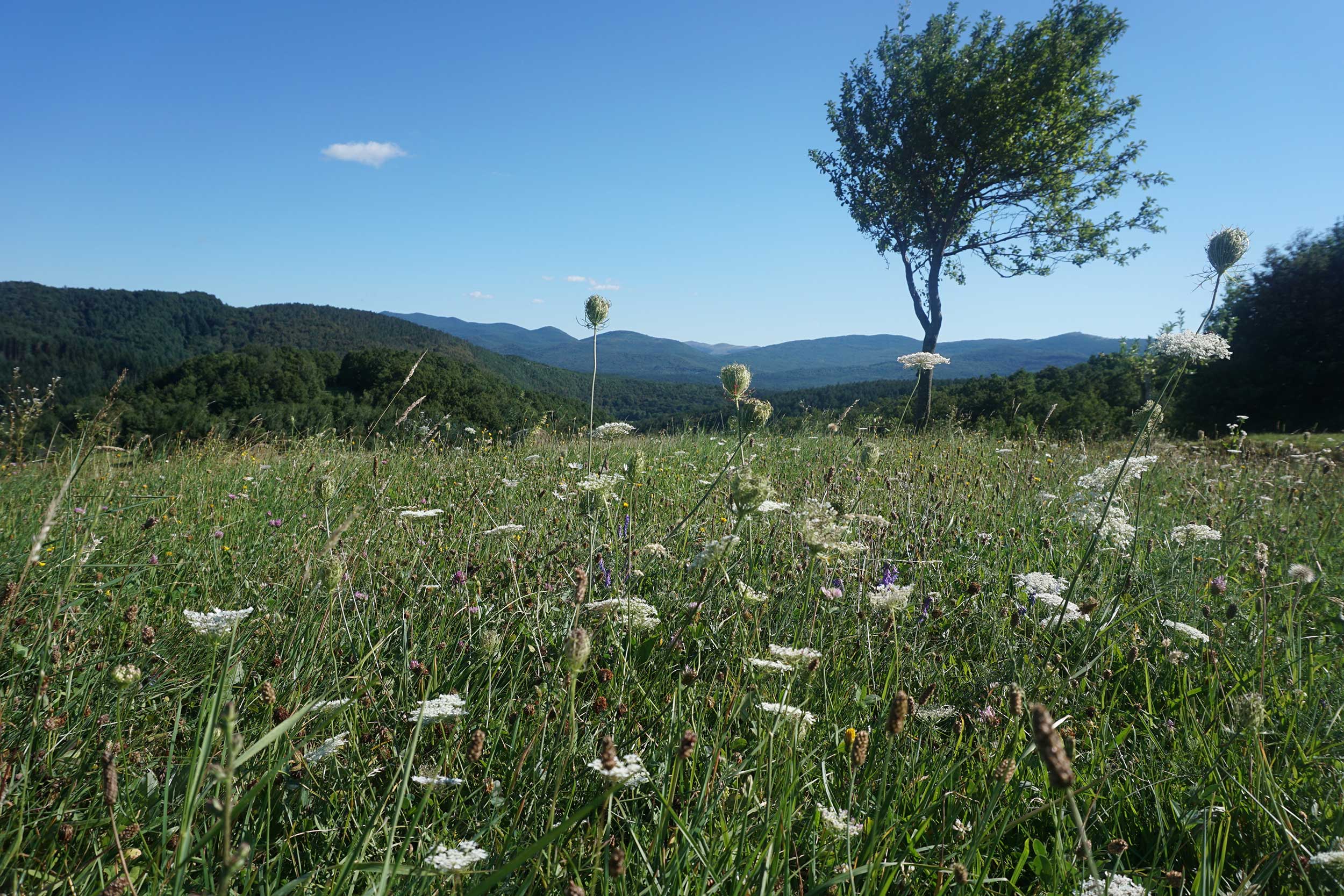 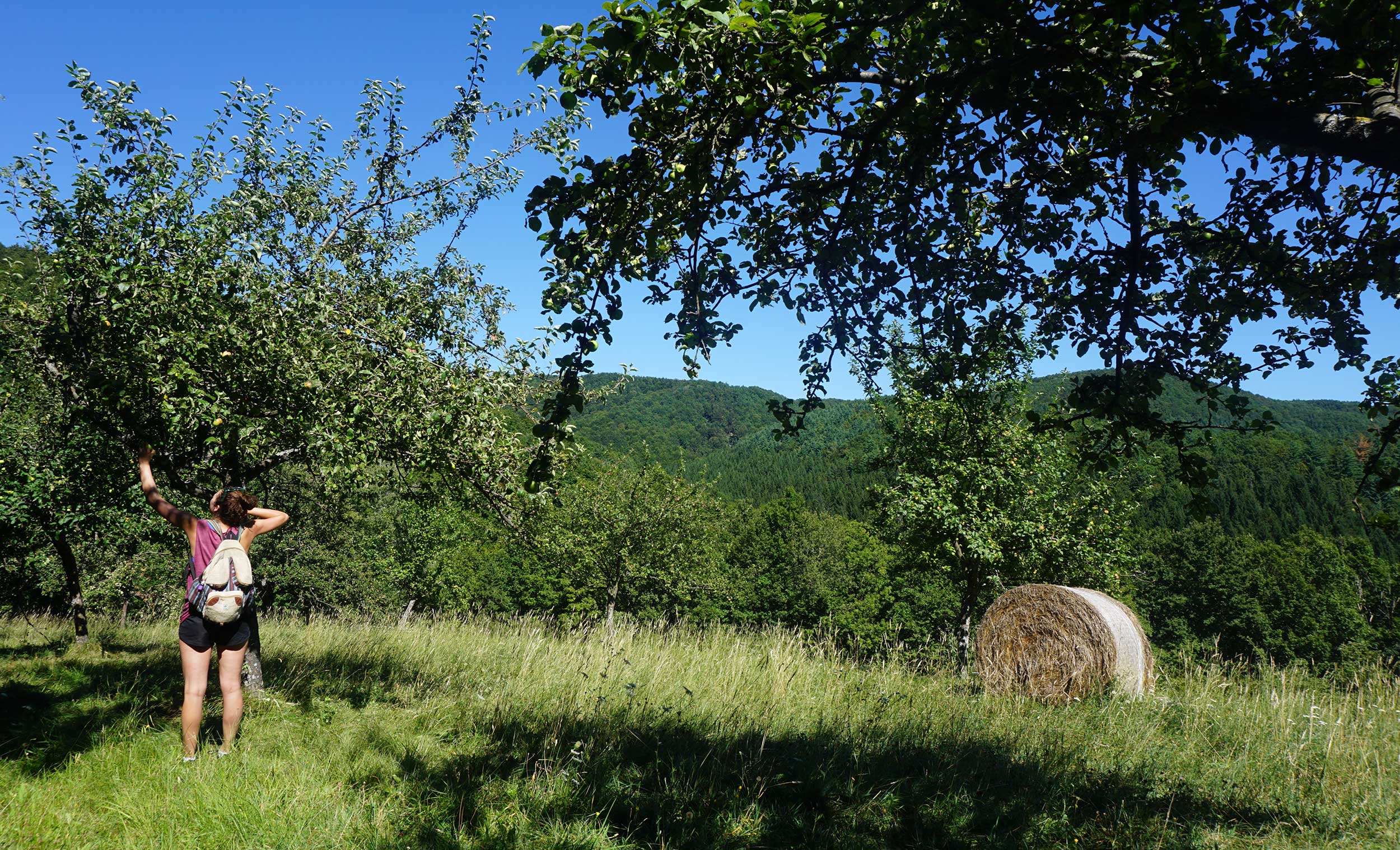 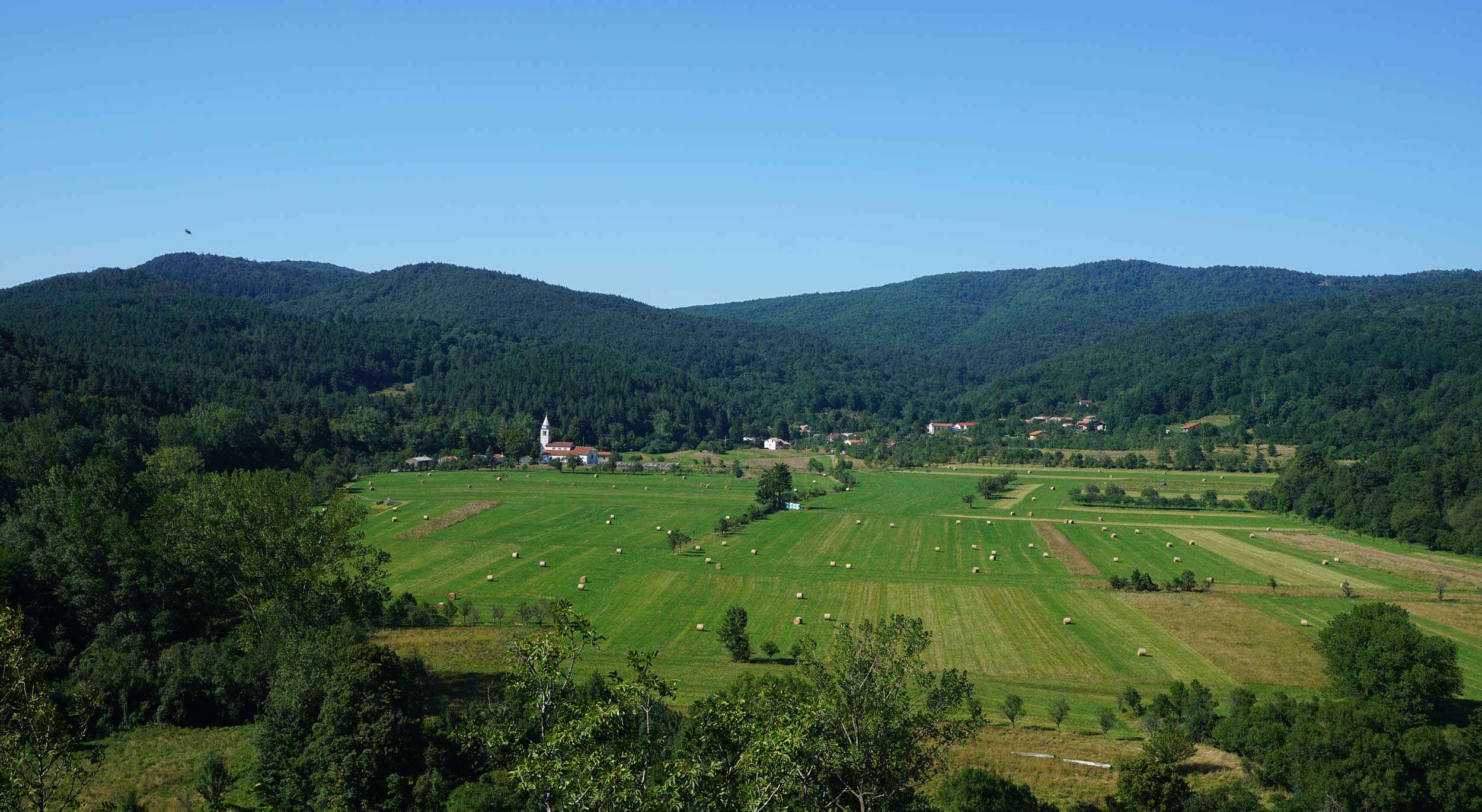 Most of the family farm the land. They have cows, goats and sheep, some chickens, geese and rabbits, and fields for organic veg. Everyone works at least 10 hours a day, except Vida. I would find her every morning sitting on her bench and she’d offer coffee and call me mia cara (my darling). She was so nice! I miss her.

I don’t speak Slovenian and Vida doesn’t speak English, so we’d use Italian. Like most of the old folk around here, Vida speaks a sort of broken Italian dialect. Italy once ruled over this corner of Slovenia before it changed hands to a free state, and then later Yugoslavia. Italian communities continued living in the region and it became a compulsory school subject for south-eastern Slovenians.

Most days, Vida would cook for her son and his wife. One-pot Slovenian or Italian dishes, like minestrone (below) or goulash or orzo. Soups and stews that get better with each day that passes. 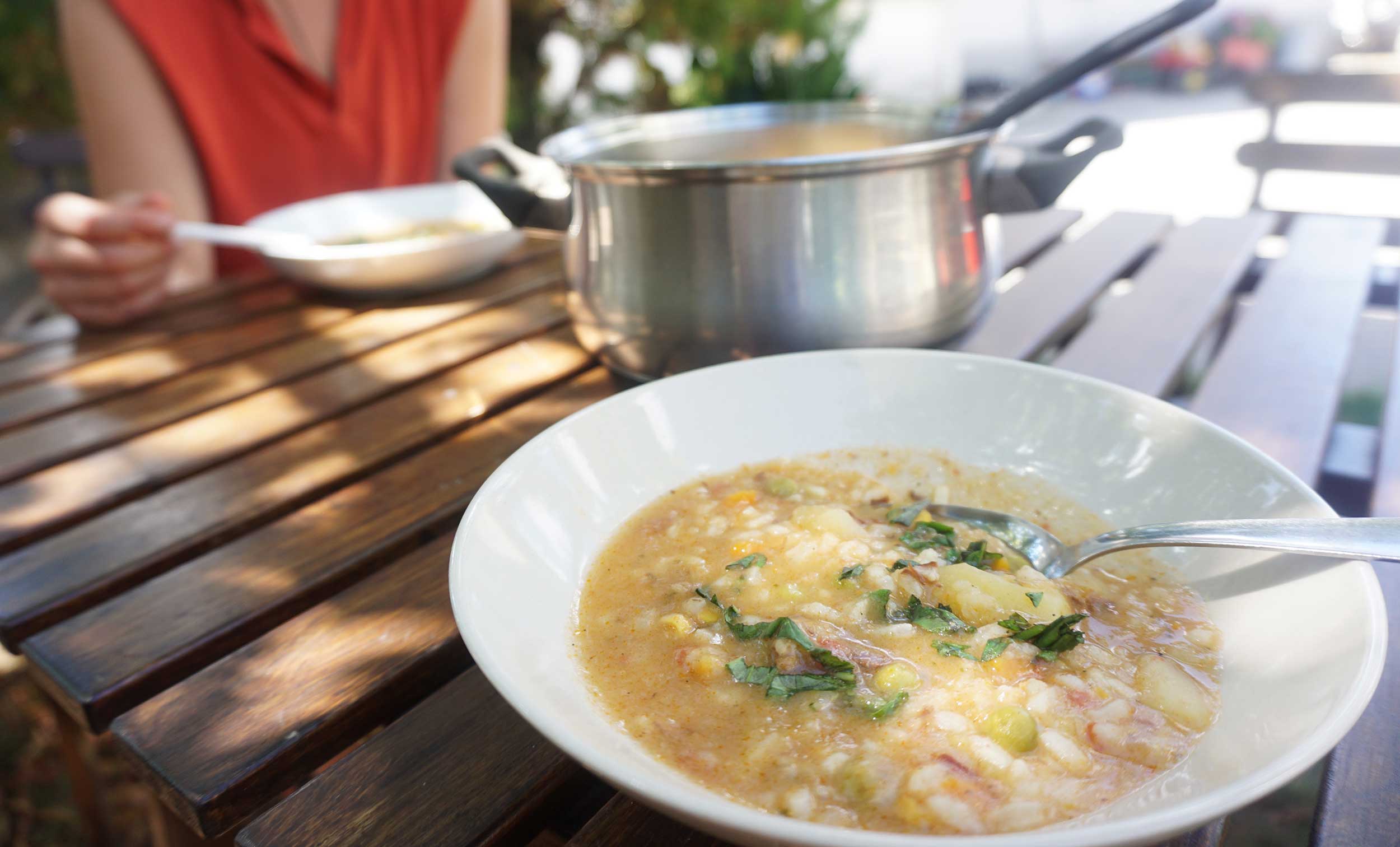 One day, she offered to show me how to cook jota (pronounced yota). Jota is an old-school staple as far as Slovenian soups go, and when it comes to soup, they have loads. Like every country, soup or stew-like dishes have their roots in peasant cooking. Filling meals that make the most of whatever ingredients are available locally and cheaply. These are meals that improve with age, kept for days on end, gradually eaten away and added to until they no longer resemble where they left off. Soups – to quote my fave Tamar Adler – “needn’t taste of their ingredients, but only give their ingredients somewhere to be left off and picked up again.” And how true is that!

Soups taste all the better with the most overripe of tomatoes, the cheapest cuts of meat, the scrappiest and wonkiest of vegetables and the bones that nobody wants anymore. These ugly tramps make a good soup worth eating!

Anyway, I digress. Vida and I cooked jota. Jota I found out, is filling, flavourful and pretty ugly. It’s made up of potatoes, repa (a turnip-like veg) and pork fat, and it starts with a pot of water. This is to cook the potatoes, but like all good, thrifty recipes, the starchy cooking water is also the beginnings of your meal. 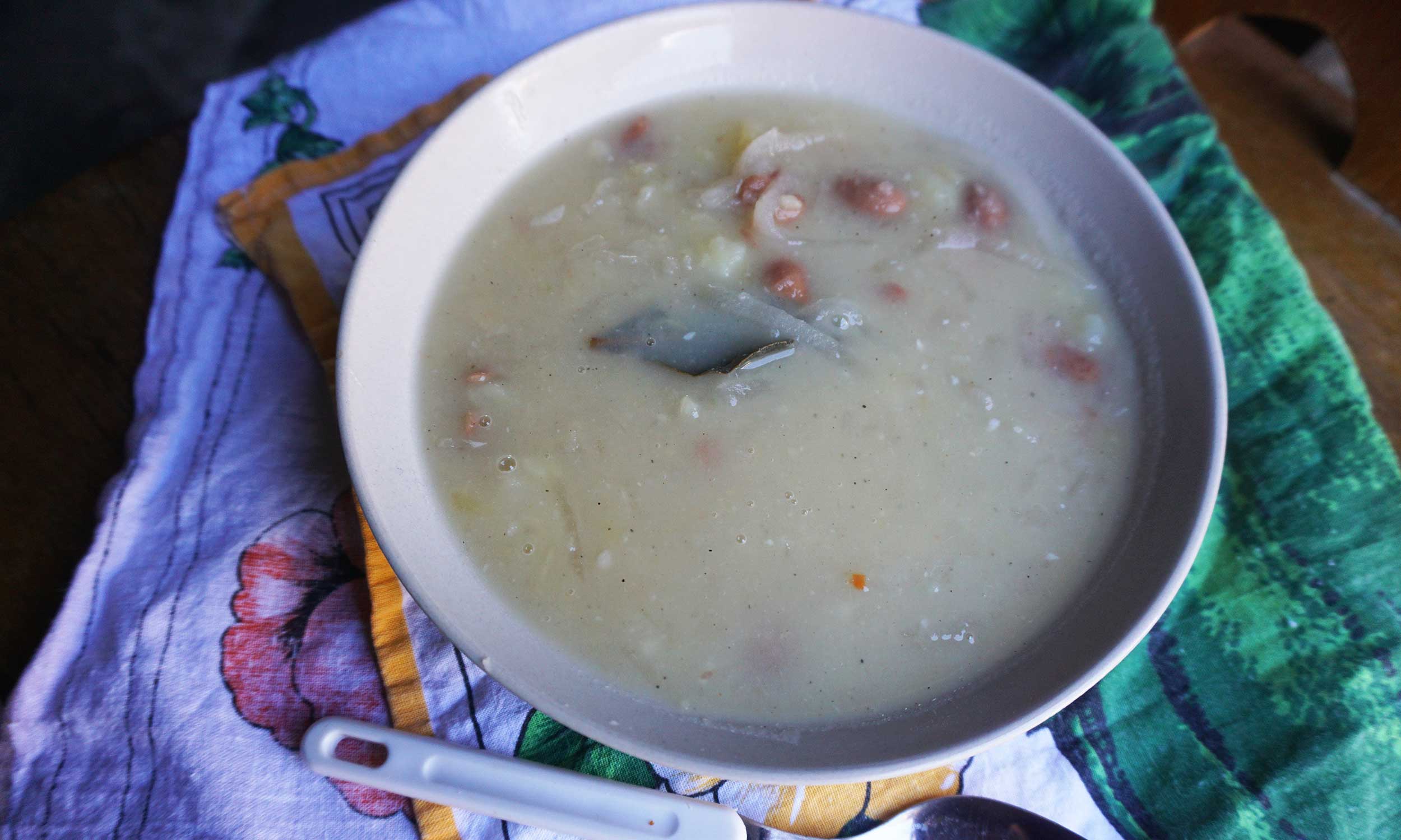 Flavour the potato cooking water with a little bouillon, bay, peppercorns and garlic, then once the potatoes are tender, roughly mash it all (don’t drain!). Add beans – whichever you prefer – then continue simmering and cooking it down.

The pork lard is there to thicken it and add flavour. Slovenians love pork, and they use its fat a lot. There’s a saying that polenta isn’t complete without a pig stepping in it (or something like that). On a walk in the forest one day, we came across a group of men roasting a whole pig on a spit, just casual. They rubbed white doughy bread over it to catch its drippings and offered it up with beer. Pork fat mixed with smoked pork lardons was also offered, spread thickly on bread. Then there’s Slovenian pancetta, really finely sliced fatty slithers that melt in your mouth.

Of course, this is a cheap way to add good flavour to whatever you’re cooking. Next time you think of it, keep the drippings from your Sunday roast in a sealed jar. This will add flavour to roasting potatoes, a bowl of steaming rice or a humble bowl of soup, like this one. You could even flavour the drippings with woody herbs, garlic or whatever you like.

Vida heats the fat in a small pan with garlic, then mixes in just enough flour to make a loose paste. Once added to the soup, the repa makes an appearance. Now this is an odd one, because in Slovenia you can buy this turnip-like veg already pickled. And as you can’t buy that type of thing in the UK, I suggest quickly pickling it yourself. It’s not difficult. Grate your turnips, add vinegar and salt, scrunch well, then stir into your soup. Serve with a chunk of bread. 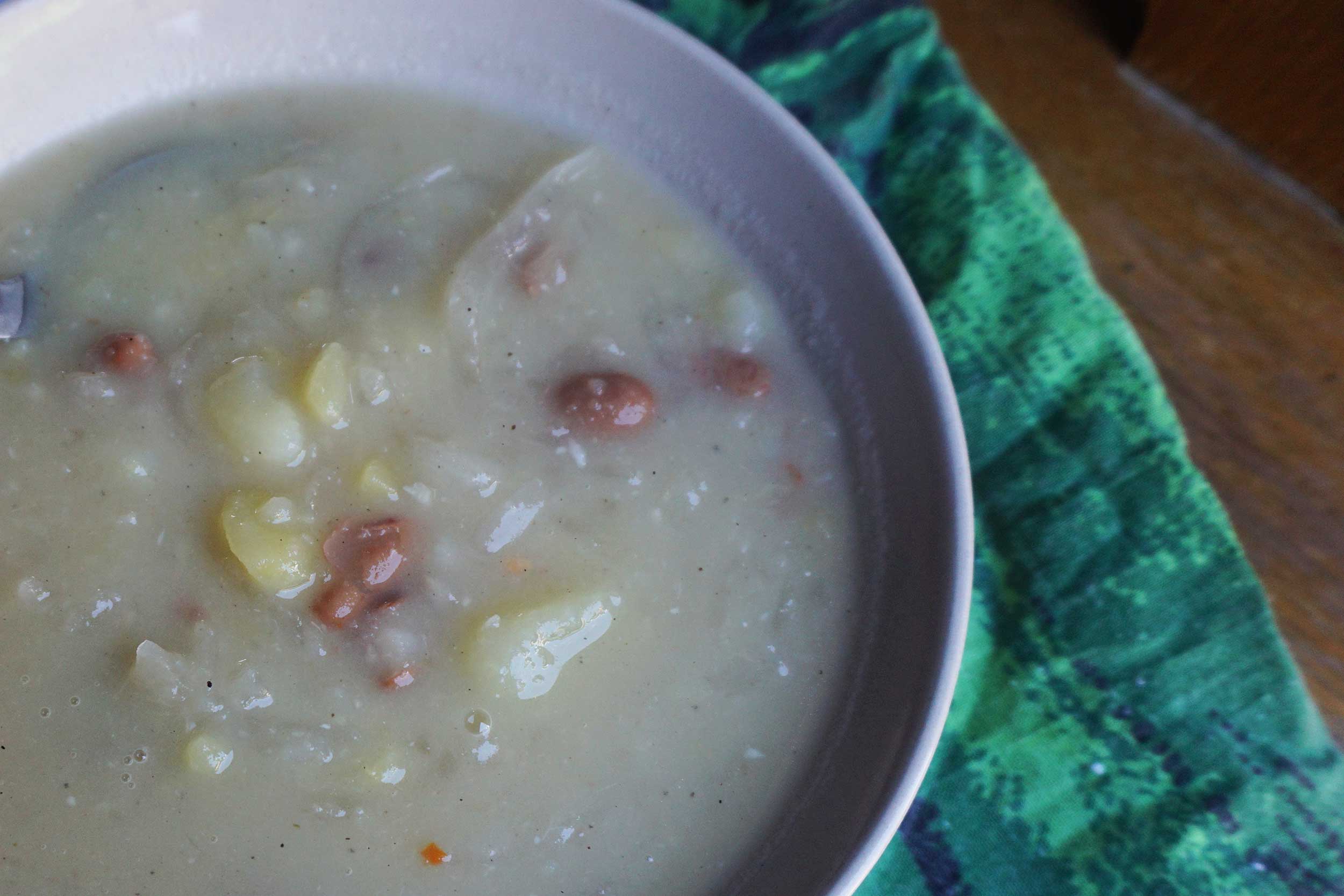 Peel and quarter the potatoes lengthways, then peel and finely chop the garlic. Add the potatoes and half of the chopped garlic to a medium saucepan, and cover with cold water. Add the bay leaves, stock or bouillon and a good pinch of salt and pepper. Cover and bring to the boil, cooking until the potatoes are tender.

Roughly mash the potatoes (don’t drain them), then drain and tip in the beans. Leave to simmer over a low heat.

Heat the pork drippings in a small pan, add the remaining garlic and stir in just enough flour to make a loose paste. Add the paste to the vegetables and stir – this will help to thicken it.

Peel and coarsely grate the turnips, then add a good splash of vinegar and a good pinch of salt. Scrunch well, then leave to soak for 10 minutes. Squeeze out the pickling liquid, then add the turnip to the soup. Cook for at least another 10 minutes until thickened and smelling good. Season to taste, then serve with a hunk of bread.

Till the next time…
This is good just as it is the next day and the next after that, but you can also add leftover scraps of cooked meat, leftover roasted vegetables or tear stale bread into it for an even thicker soup.