Soaking and cooking beans from their dried form can make you feel like you’ve achieved something. There’s little effort that goes into it really, but still, I’m pleased with myself whenever I get round to it. I’m trying though, to make it a regular thing, soaking beans whenever I think of it, then taking a minute the next day to put them on the hob to cook. Once cooked, they freeze easily in portions; as ready as a tin of beans.

Time or a lack of planning is often the reason many of us don’t do it, preferring to buy the tins to drop straight into whatever’s on the burner. That’s fine too. But think of the extra packaging, the extra cost and most importantly the lack of a very good broth at the end of it – something I’ve only recently discovered! 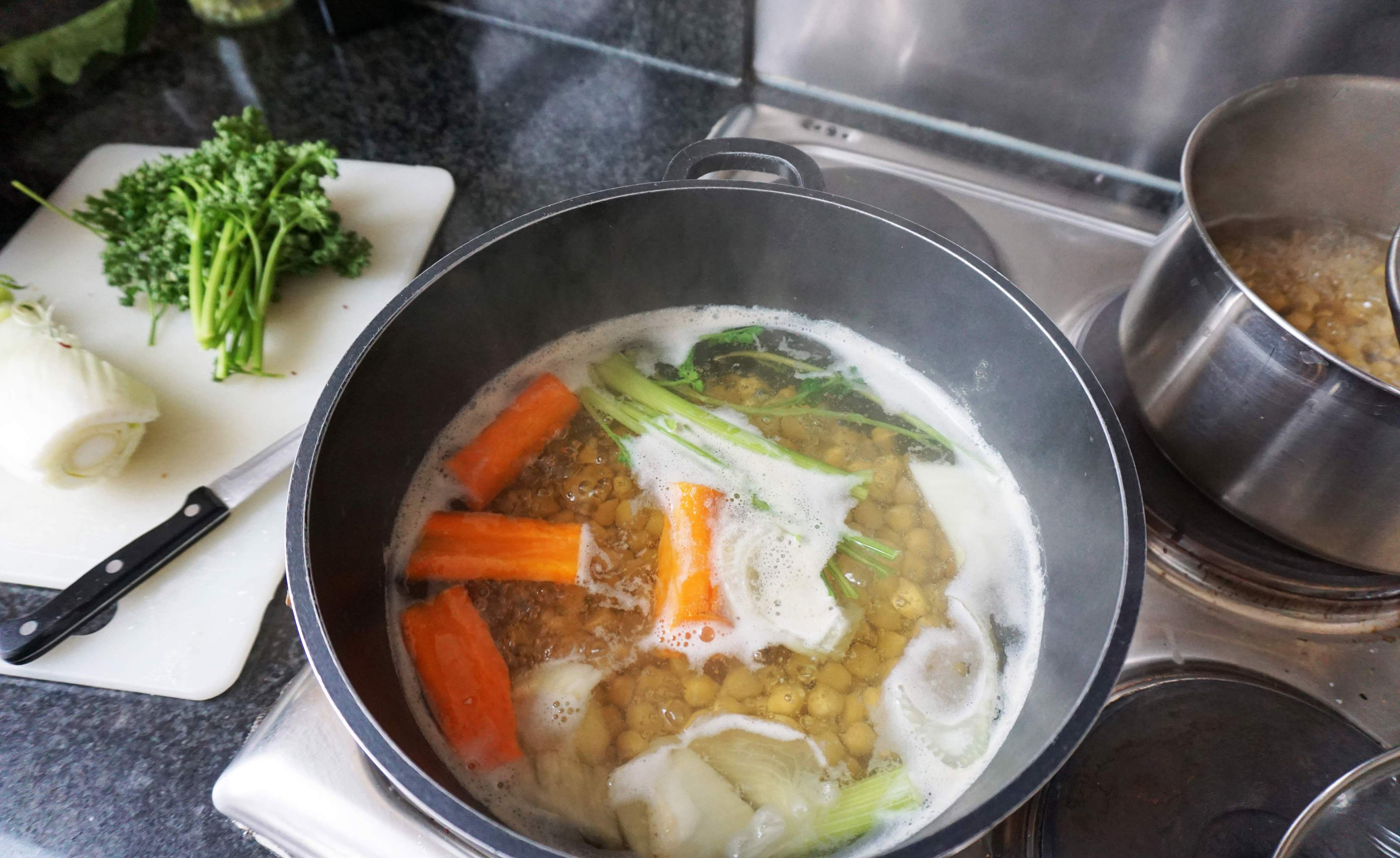 So often, I’ve cooked beans from scratch and drained away the cooking water afterwards. But I’ve since learnt that to make meals stretch further, this is totally the wrong thing to do. In Italy, the cooking water is treated not as a by-product, but an ingredient in its own right, flavoured with vegetable scraps, herb stalks, Parmesan rinds and whatever else to create a tasty broth. Serve those beans simply in their murky liquid with a drizzle of good olive oil, sea salt and fresh herbs and it’s better than anything a tin could produce.

When cooking beans, cover them by about 6cm of water – some recipes call for bicarbonate of soda which will help them soften more quickly, but I’d say this is only necessary if you want to blitz them afterwards (for houmous, say) as it leaves a slightly funny taste. Flavour the broth with whatever vegetable or herb scraps leftover from your evening’s dinner. Fennel, I’m told and have tried, is particularly good in a pot of beans. Parsley stalks, woody herbs, bay leaves are all good additions, as are the stubs and ends of celery, carrots and onions and whole garlic cloves. As the beans cook, check on them from time to time and top up with water or lower the heat if it’s simmering too wildly – last week, I let them boil away until only the beans were left burning in the pan. Not a wise move.

A pot of beans will last happily for several days, the beans soaking and getting plumper in the broth as the days go. This can only be a good thing. Tomorrow, fry chopped onion, garlic, carrot and maybe celery (or just whatever you have) until soft. Ladle over the beans and liquid, bring to a simmer, add broken bits of pasta from the end of a packet and a Parmesan rind, then cook until al dente. Serve with more grated Parmesan and lots of black pepper for what the Italians call, pasta e fagioli. Or chop and add some greens and a few chopped tomatoes, then ladle it over hot toasts and serve with a good pour of olive oil. Or add your beans and liquid to a pan of browned stewing meat, like beef or lamb, with whatever other chopped vegetables you have, then cook slowly in the oven to make a tasty stew. Alternatively, add Indian spices and coconut milk for a quick curry. After three days, if you still haven’t finished them, freeze the beans in their broth to keep them tender. They defrost easily and forgivingly. 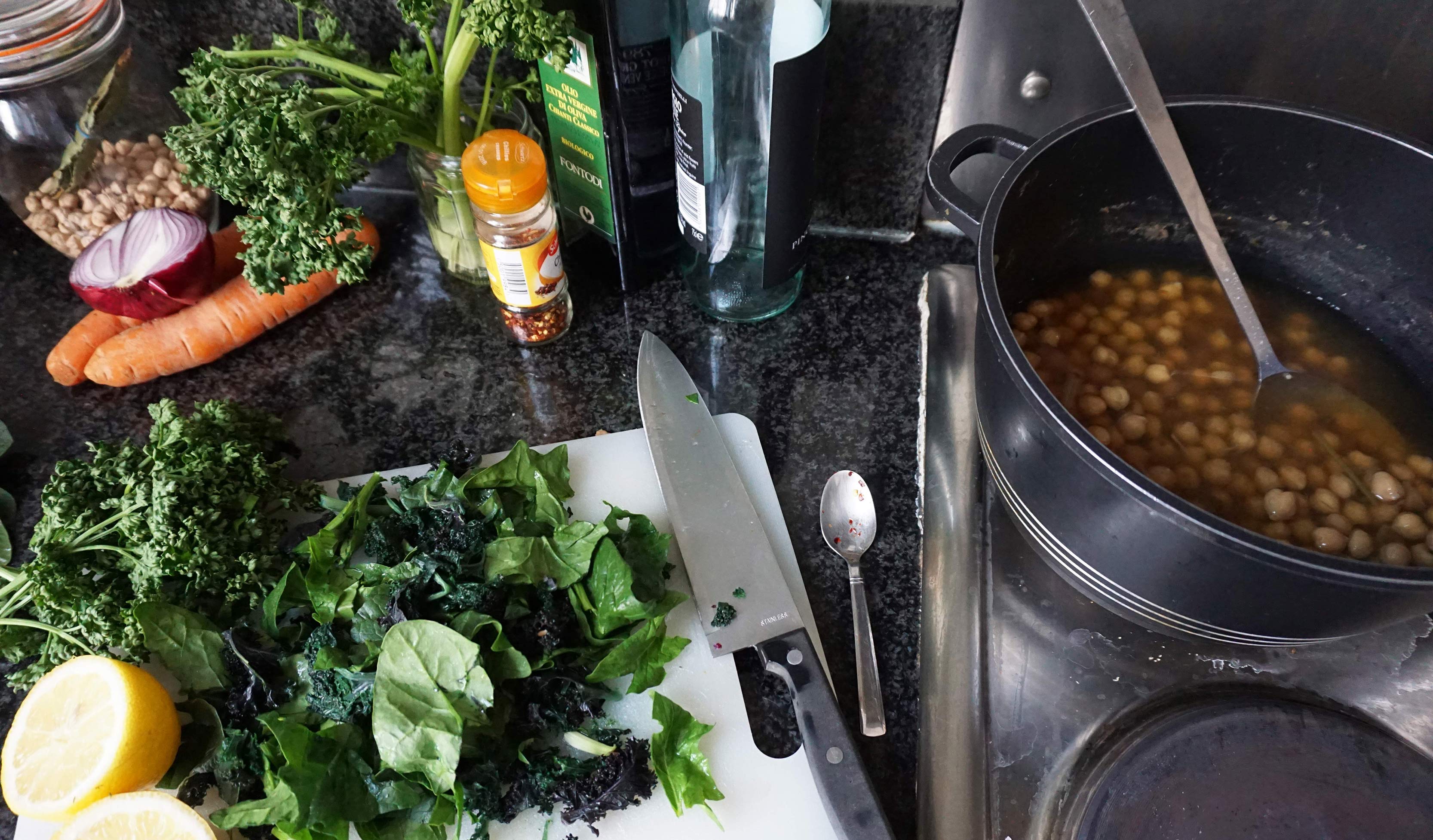 Chickpeas, in particular, are a favourite of mine. They crop up a lot in countries where traditional peasant food is still cooked and revered, and rightly so; hearty and satisfying, Spanish garbanzo appear in paprika-seasoned stews as do Italian ceci, mixed with pasta to make a filling minestra. Houmous, now so popular with basically everyone, has made chickpeas a staple, at least in its puréed form.

I cooked them yesterday following Rachel Roddy’s advice – her book, Five Quarters: Recipes and Notes from a Kitchen in Rome, is one of my favourite cookbooks. She writes so well, that it’s easy to read it like a novel. The pictures are all her own; unpretentious, not overly styled, simple and beautiful. Her blog is equally brilliant.

Rachel cooks beans and particularly chickpeas a lot, and always uses the broth to delicious affect. About them, she says this, “the cooking water surrounding just-cooked beans or chickpeas is a cloudy, murky affair that looks…decidedly unappealing, like the water somebody with a purple rinse has washed their hair in” [note the colour of my broth!]…”bean cooking water is good stuff, cloudy with the almost sweet, nutty goodness that has seeped out of the beans as they cooked, and it will provide your soup or stew with body and depth. It is in some ways a secret ingredient”.

This is soo right. It might not look pretty, but it’s bloody good – nutty and sweet, but clear and nourishing. Last night, sweet slow-cooked fennel and onion formed the base of my broth, with chilli for gentle heat and lemon juice, Parmesan and good olive oil to finish. Wine will add more depth, but it’s not totally necessary; use it only if you have the remains of a bottle leftover. A Parmesan rind is a great addition too. Dropped into the broth, it’ll add an intense umami flavour as it infuses with everything around it. The next time you find yourself with a rind, freeze it for more occasions like these.

I’ve shown how to cook the beans from scratch in their broth using exact amounts for two people. This is just to give you an idea. If you’re cooking with foresight, cook a bigger batch of beans (it’s the same method and will take about the same amount of time), then add as much as you need to the fennel mixture and continue the recipe as explained. Alternatively double this whole recipe; the leftovers will taste better the next day and the day after that. 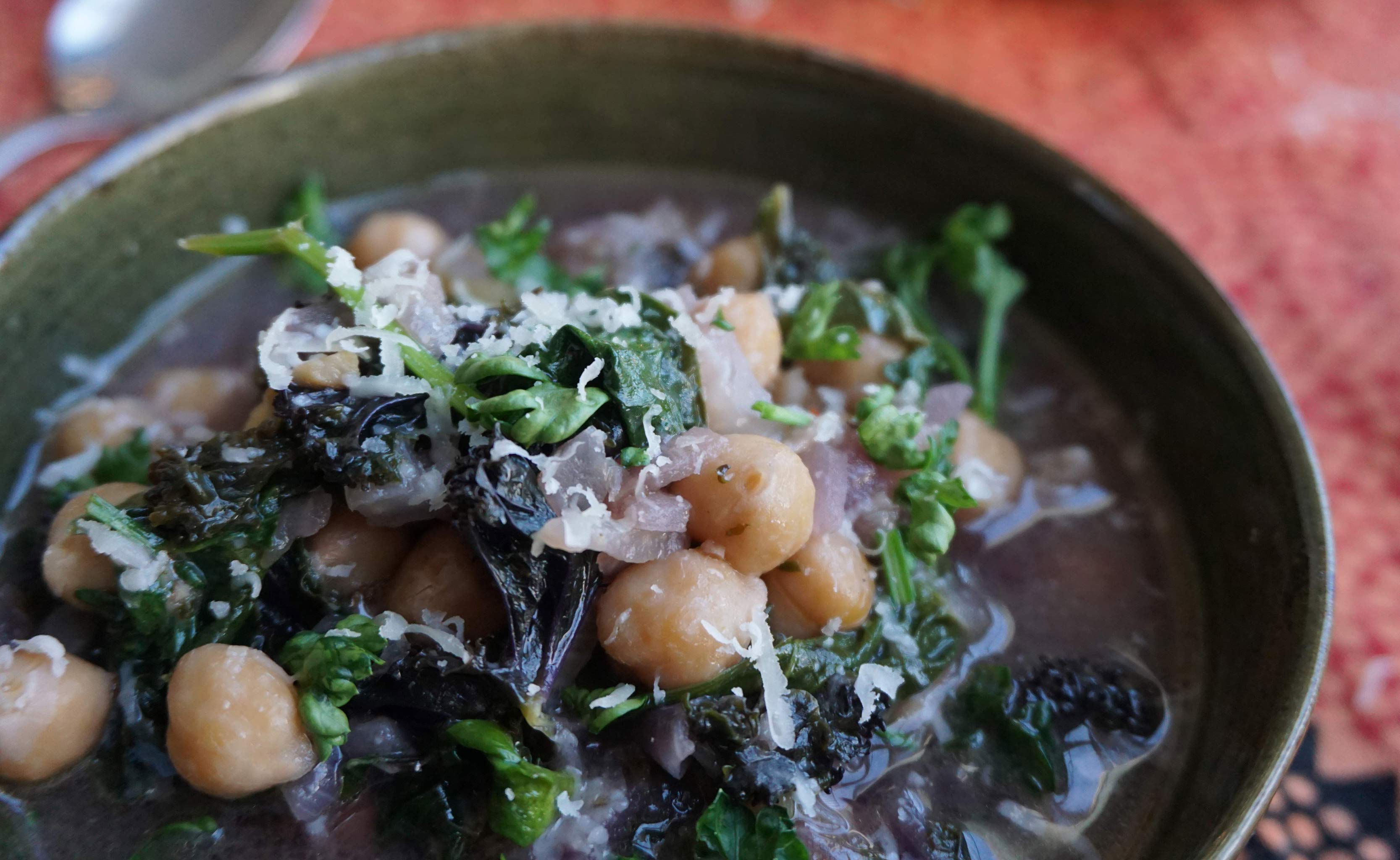 Soak the chickpeas for 8 hours or overnight, then drain into the sink (or water your plants!). Place in a large pan, pour over enough water to cover by about 6cm and place over a high heat. While it’s coming up to boil, pick the parsley leaves and add the stalks to the pan. Trim and add the fennel and onion trimmings, and add the bay. If you have anything else – an old carrot, the odd garlic clove, a celery stalk – add these too. Boil for 5 minutes, skimming away any scum from the surface, then cover and reduce to a gentle simmer for 2 to 3 hours, or until tender. Keep checking and topping up with boiling water if necessary. Once cooked, remove the herbs and veg trimmings to the compost. Taste the broth and season with sea salt and black pepper.

Heat a long pour of olive oil in a medium pan over a medium heat. Finely chop the onion, garlic and fennel, then add to the pan with a pinch of salt. Reduce the heat to medium-low and cook gently for 10 to 15 minutes, or until soft and sweet.

Meanwhile, remove and compost any tough stalky bits from the greens, then roughly chop any larger leaves. Add the chilli flakes and wine to the pan, turn the heat up, then leave it to boil and bubble away completely. Stir in the greens and chickpeas, and enough broth to cover – if you don’t have enough, top up with boiling water. Add a Parmesan rind if you have it for delicious umami, then cover and bring to a lively simmer for 5 to 10 minutes, or until the greens are tender.

Finely chop and stir in the parsley leaves, add a good squeeze of lemon juice, then season to taste. Cover and leave it to sit for 10 minutes or so, then pick out the Parmesan rind. Serve with gratings of Parmesan, a drizzle of good olive oil and crusty bread.

Till next time
You could compost the greens’ stalks but some are equally nice chopped up and stir-fried with garlic or added to stir-fries.